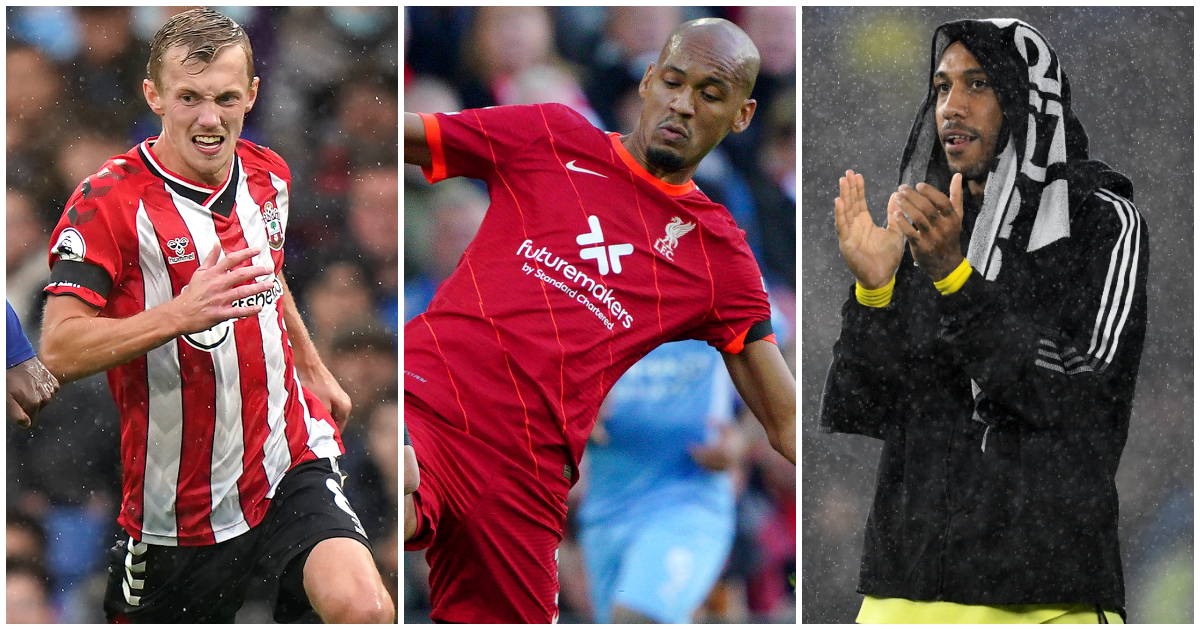 Pierre-Emerick Aubameyang might struggle to keep his Arsenal place after the international break but at least he leads the line in this weekend’s worst side.

As always this XI is based on Whoscored’s ratings and, this week, will be playing 4-4-f**ing-2…

Karl Darlow – 5.81
Beaten too easily twice by Hwang Hee-Chan with both finishes coming from an angle. For the first, Darlow committed when he should have held his ground; on the second, he stayed but failed to react. A bad game on ‘not his finest day’, as the Evening Chronicle put it, with Martin Dubravka returning from injury.

RB: Fabinho – 5.85
The Liverpool star, who featured in Jurgen Klopp’s midfield against City, is having to do a job at right-back so we can squeeze in those who sucked most over the weekend. Surprisingly, James Milner rated a 6.85 after a testing afternoon that lasted longer than it should, while Fabinho in midfield struggled to get close to City, especially in the first half. Had a chance to win it for Liverpool late on but Rodri came from nowhere to block.

How will Liverpool fans explain to their kids that Fabinho couldn't score from here! pic.twitter.com/xS56Jw0rz9

CB: Federico Fernandez – 5.91
No tackles, no interceptions and no blocks from Newcastle’s stand-in captain at Wolves. Fernandez couldn’t get close enough to Hwang Hee-Chan to deny the Wolves striker either of his two goals.

CB: Joachim Andersen – 5.43
A bad day at the office for the Palace centre-back. Andersen was robbed by Kelechi Iheanacho for Leicester’s opener before the defender failed to cut out the pass into Jamie Vardy that set the striker up for Leicester’s second. Booked for good measure.

LB: Javier Manquillo – 5.83
The Newcastle right-back moves across to left-back to fit into this weekend’s most wretched XI, which Manquillo is among despite teeing up Jeff Hendrick for Newcastle’s leveller at Molineux. But that only came after the defender failed to track Hwang Hee-Chan for Wolves’ opener, with the striker running easily between Manquillo and Fernandez.

CM: James Ward-Prowse – 5.28
The Southampton midfielder scored from the penalty spot but that was the only bright spot on a miserable afternoon. Ward-Prowse looked every bit the player toiling on through injury and seemed off the pace at Stamford Bridge, highlighted by the late challenge on Jorginho at 1-1 which saw him receive his marching orders. Even his set-piece delivery was poor while he lost possession on all five occasions he attempted a cross or long pass. Ward-Prowse lost 10 of his 11 ground duels and was dribbled past seven times.

CM: Ozan Tufan – 5.74
The ‘Turkish Paul Pogba’ struggled to get involved on his first Premier League start, with Leeds’ intensity depriving the 26-year-old of any space to play. Hooked by Xisco Munoz (RIP) before the hour mark.

RW: Ismaila Sarr – 5.64
Somewhat cut adrift on the right wing at Leeds and he was hardly the only Hornet to stink out Elland Road but the Watford star still managed to lose possession 13 times and lost all but one of his seven duels.

LW: Jordan Ayew – 5.86
The Palace attacker lost possession a dozen times before being replaced eight minutes into the second half. Wasted several crossing opportunities and when he did deliver into the box, never found a team-mate. His replacement, Michael Olise, took eight minutes to make an impact by scoring Palace’s first goal of their fightback.

F: Josh King – 5.98
The Watford striker’s afternoon was cut short even earlier than Tufan’s, with King the recipient of the half-time hook at Elland Road. In 45 minutes, King managed 16 touches and gave away possession nine times.

F: Pierre-Emerick Aubameyang – 5.96
Arsenal struggled to find a way through to Aubameyang, whom it was hoped would build on his derby goal. But the Gunners’ skipper struggled with his back to goal while being shackled by Brighton’s back three before being hooked on 71 minutes for Alexandre Lacazette.