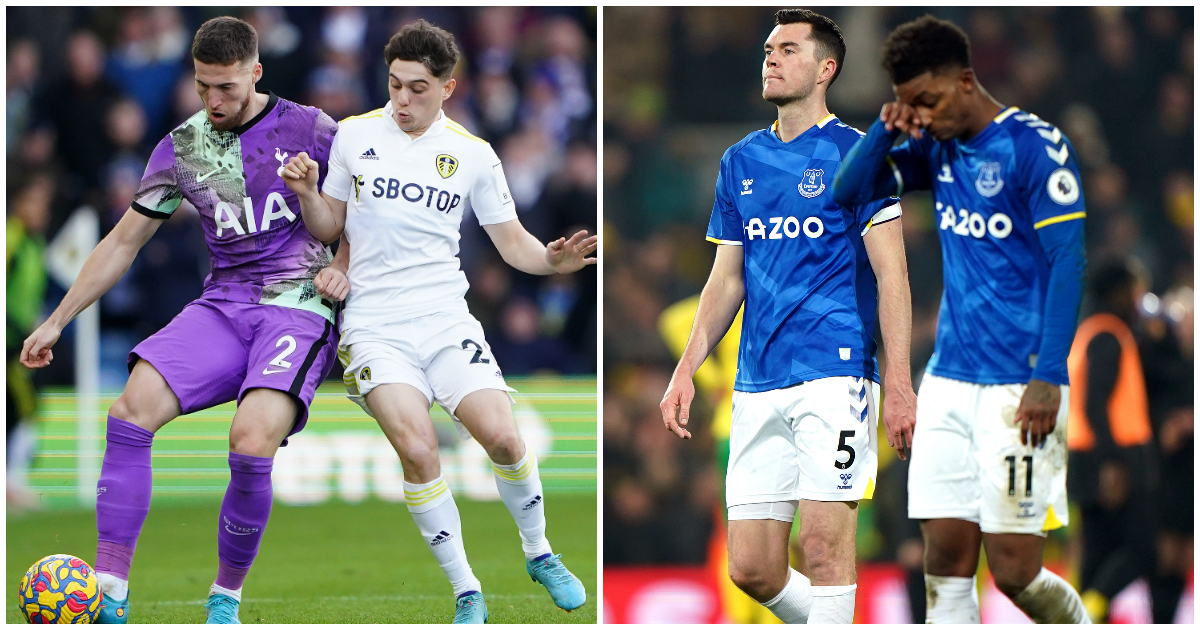 Leeds make up more than a third of the Premier League’s worst XI this weekend, while Michael Keane also features after a momentary lapse.

Here is the worst XI from the weekend’s action, according to Whoscored’s ratings…

GK: Robert Sanchez – 5.91
Sanchez was the lowest-rating Brighton starter in the defeat to Aston Villa, which seems somewhat harsh. The Spanish stopper stood little chance with either of Villa’s goals and it might have been worse without smart saves from Philippe Coutinho and John McGinn. No other Seagull scored higher than 6.52.

RB: Luke Ayling – 5.70
The Leeds skipper was kept on a lead by Heung-min Son and when the chance arrived to get the hosts back in the game in the first half, Ayling was off-target with a free header. The right-back was the lowest-scoring Leeds defender…

CB: Diego Llorente – 5.75
The two centre-backs fared little better. Pascal Struijk scored a 5.77 before being hooked at half-time, while Llorente was left on to toil for the entirety of Marcelo Bielsa’s final game in charge. Given his impression of defending for Spurs’ second goal, it may be that the Whoscored algorithm took pity on Llorente.

CB: Michael Keane – 5.47
The Everton defender was relatively solid for all but a split second of the Toffees’ defeat to Manchester City. But when Keane erred, failing to shift his feet to adjust to a deflection off centre-back partner Mason Holgate, Phil Foden pounced to bag the winner.

LB: Rico Henry – 5.84
To the naked eye, the left-back was by no means Brentford’s worst performer in the defeat to Newcastle but, similarly to the defeat at Manchester City earlier this month, Henry finds himself marked down. Losing nine of 10 duels and giving away possession 17 times will do that.

CM: Adam Forshaw – 5.86
The Leeds midfielder struggled in the centre of midfield while Tottenham ran amok at Elland Road, but Forshaw at least offered some resistance. He won more than half of his tackles, found a team-mate with more than half of his long passes and with 88% of his passes overall. But he was dribbled past twice as Spurs carved their hosts open at will.

LM: Mathias Jensen – 5.86
The Brentford midfielder’s most notable contribution was leaving the field early in the second half to five way to Christian Eriksen. Prior to that, Jensen gave the ball away with more than half of his 15 touches while failing to make a tackle.

RM: Josh Sargent – 5.84
Playing on the right of Norwich’s midfield at Southampton, Sargent failed to offer a shot or cross; won only five of 16 duels; succeeded with neither of his dribbles while being dribbled past three times. Not the USA international’s finest work.

CF: Fabio Silva – 5.79
The Wolves teenager was making only his second start of the season but he was made to feed off scraps in the defeat at West Ham. None of Silva’s four shots hit the target but the 19-year-old was left woefully isolated. Maybe a January loan would have been better for Silva after all.

LW: Daniel James – 5.92
The Leeds winger-turned-striker was off target with one great chance in the second half in another game full of running, usually very fast, with little reward. Struggled as much in a more familiar wide position after being rescued from a central role he clearly doesn’t relish.

RW: Josh Dasilva – 5.85
The forward’s second start of the season lasted just 11 minutes following an ugly-if-unintentional challenge on Matt Targett, leaving Brentford in the mire. At least Dasilva had 100% passing accuracy with the four he managed before his early shower.