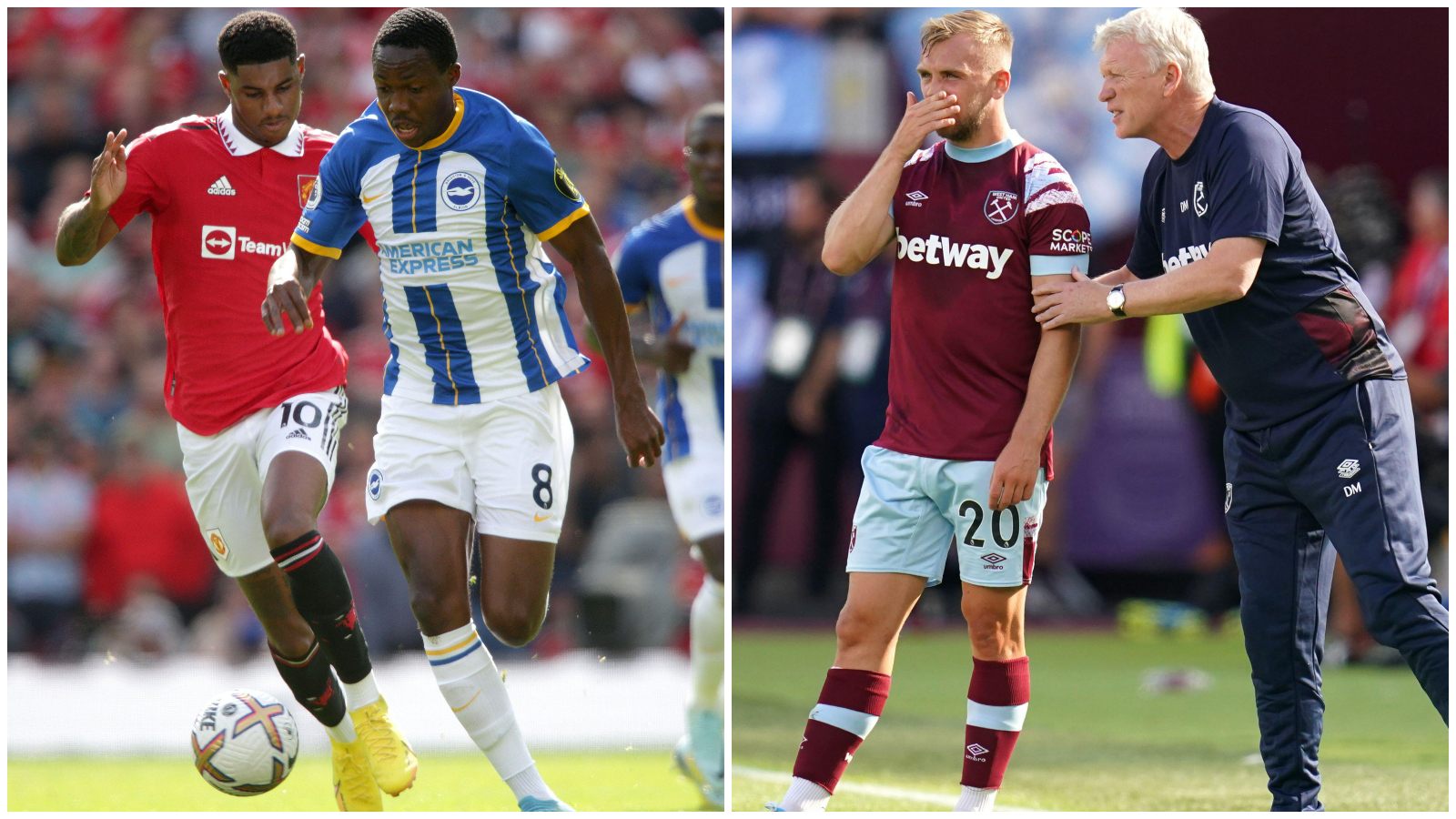 Scott McTominay was absolutely wretched against Brighton – but somehow the Man Utd midfielder is spared a place in the worst XI from the Premier League weekend.

Here, in 4-4-2 formation, is the worst XI according to Whoscored’s ratings…

GK: Alisson – 5.79
It’s hard to think of much that Alisson got wrong at Craven Cottage. He was badly exposed by awful defending for both of Fulham’s goals and is most likely damned by a lack of activity, having made only one other save while claiming no crosses. There were certainly other Liverpool players more deserving of a place in this XI than the Brazil keeper.

RB: Aaron Hickey – 5.95
Not the debut the Brentford right-back might have wished for. At Leicester, Hickey offered not a tackle, block or clearance, making only one interception. He lost all but one of his six duels while, going forward, his only cross found a Fox, as did more than half of his seven long passes.

CB: Diego Carlos – 5.65
Another debutant who endured a difficult first taste of the Premier League, Villa’s £26million centre-back won none of his three aerial duels and lost possession 20 times.

CB: Marc Guehi – 5.49
The Palace’s defender’s most obvious aberration was the late own goal which put Arsenal out of sight, a clumsy duck of the head to glance Bukayo Saka’s cross past his own keeper despite no Arsenal player standing within 10 yards. But Guehi looked rusty throughout, losing all but one of his seven duels.

LB: Yan Valery – 5.74
There were no left-backs who really stunk the place out this weekend and we feel obliged to include a Saints defender after they shipped four at Spurs. So Valery shifts across to the left having somehow sucked more than Mohammed Salisu.

DM: Fred – 5.86
According to WhoScored’s ratings, Fred was worse than McTominay, though the more casual observers among us would have had difficulty distinguishing between the two turds in Man Utd’s midfield against Brighton. Fred lost all four of his duels, was dribbled past twice and lost possession nine times. McTominay was even more generous, giving Brighton the ball on a dozen occasions and completing only 18 passes while hiding in United’s engine room.

AM: Manuel Lanzini – 5.84
Ex-Hammer Jesse Lingard was in contention with a 5.98 rating on his Forest debut but Lanzini gets the nod after offering, well, very little prior to being replaced just before the hour mark against Manchester City.

RW: Jarrod Bowen – 5.97
Against City, the West Ham winger endured a rough 89 minutes during which he gave half of his passes to an opponent, failed in all three dribble attempts, delivered not one accurate cross, lost seven of his nine duels and was dribbled past four times.

LW: Marcus Rashford – 5.98
Rashford needs a flying start to the season if he is to have a hope of winning back his England place in time for the World Cup. But against Brighton, he looked every bit as lost as he did last term, missing one absolutely glorious chance to give United a lifeline. In addition to that, playing in his favoured position off the left, Rashford failed to deliver a cross or a successful dribble.

FWD: Brennan Johnson – 5.73
It was a chastening Premier League bow for Johnson, though he was hardly the only Forest player to struggle at Newcastle. The forward failed to attempt a shot on Newcastle’s goal while giving the ball back to the Magpies with eight of his 14 attempted passes. With 19 touches in 90 minutes, he lost possession 13 times.

FWD: Adam Armstrong – 5.94
Michail Antonio (5.98) and Odsonne Edouard (5.95) pushed the Saints striker close, with all of the forwards struggling to get a kick on the opening weekend. Ralph Hasenhuttl said last week that this is “the most important season” for Armstrong. He started it by being hooked at half-time.