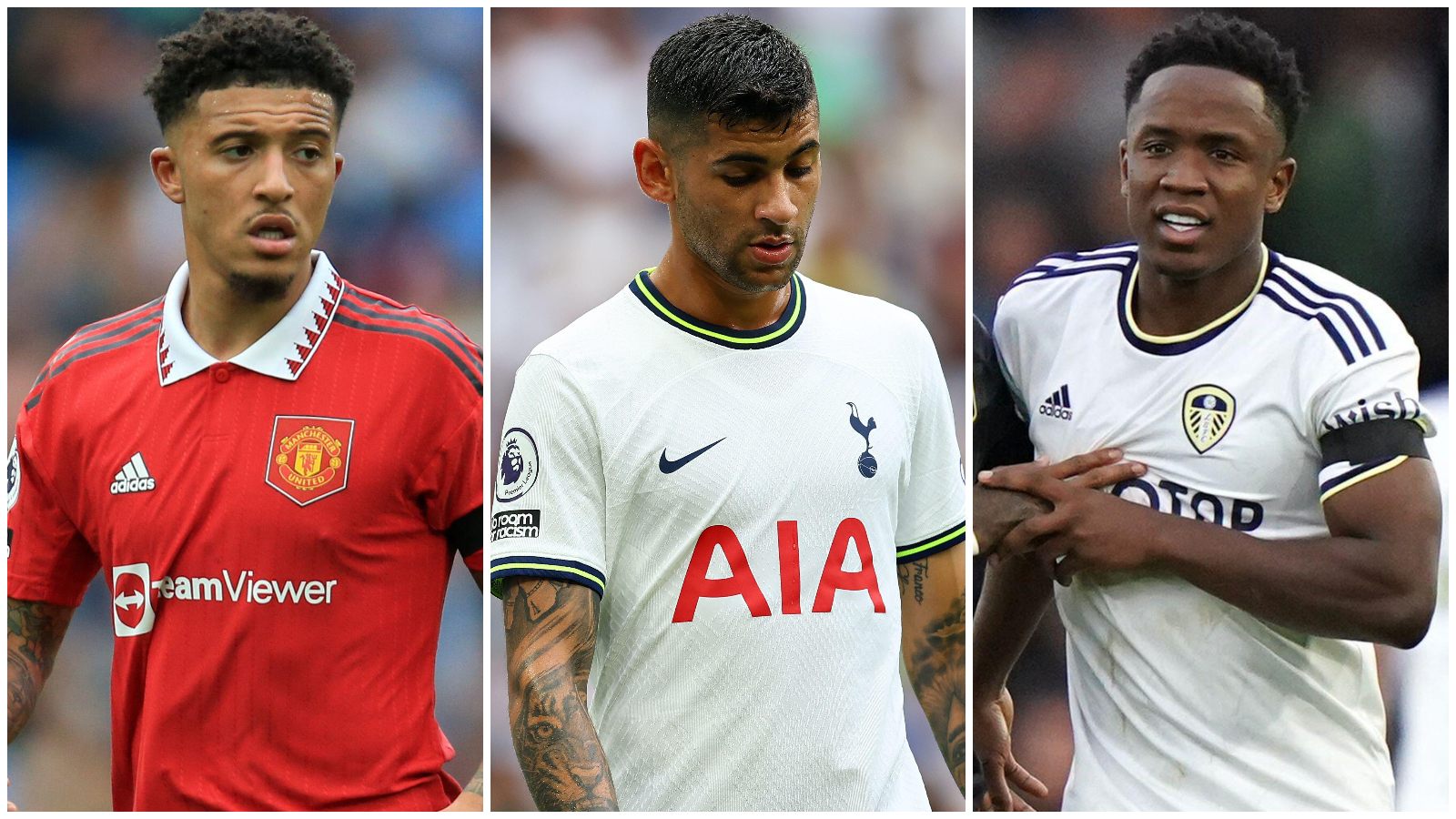 Man Utd’s back five all earned sub-six ratings but two Tottenham defenders are included in the Premier League’s worst defence of the weekend.

Here is the whole XI, based on Whoscored ratings…

GK: David De Gea – 5.17
De Gea wasn’t directly responsible for any of the goals that flew past him in the derby, but nor did he do much to prevent the rout. Manchester City scored six from an xG of 3.43. In that context, and the fact Erik ten Hag wants a no.1 more accomplished with his passing, it’s no wonder United are exploring the goalkeeping market.

RB: Emerson Royal – 5.16
‘Totally incapable of dealing with the threat of Gabriel Martinelli,’ wrote Garth Crooks of the Spurs wing-back, who got close enough to the Arsenal forward only to kick him and earn a costly red card. Before he was dismissed just after the hour, Royal lost six of his 10 duels, gave away possession eight times, and he was dribbled past twice.

CB: Cristian Romero – 5.34
Royal wasn’t the only Spurs defender to have a derby to forget. Romero was similarly wretched while trying and failing to get to grips with Gabriel Jesus. He was partly responsible, along with Hugo Lloris, for Arsenal’s second while he was beaten easily when Granit Xhaka made the game safe for Arsenal.

CB: Raphael Varane – 5.56
The United back five all had their pants pulled down by Erling Haaland and City in the derby, with United’s goalkeepers and defenders all earning sub-six scores. Varane, who lasted only 40 minutes before being replaced, was rated as the worst of the two centre-backs though Lisandro Martinez won’t reflect with much pride on his 5.77.

LB: Tyrell Malacia – 5.54
Like Martinez, Malacia had a chastening derby debut, failing to get to grips with Phil Foden other than fouling him midway through the first half, which led to Ten Hag hooking the left-back before he was sent off. His replacement, Luke Shaw, fared little better, winning only one of his six duels.

CM: Ainsley Maitland-Niles – 5.94
Southampton’s loanee was left out of Saints’ last game with Ralph Hasenhuttl saying the Arsenal man had ‘plenty of work to do’. The manager was rather more positive about Maitland-Niles after the international break – ‘he is now closer to what we expect from him’ – but he failed to take his chance against Everton. He was hooked with a quarter of the game remaining after failing to make a key pass, a shot or even a dribble. Maitland-Niles also lost possession 10 times.

CM: Nathaniel Chalobah – 5.37
The midfielder stitched up his team-mates with a ridiculous eighth-minute challenge that could have left Sean Longstaff needing stitches too. Chalobah’s daft lunge was just the first thing that went for Newcastle on an afternoon the Magpies’ luck turned.

AM: Andreas Pereira – 5.85
With the excellent Joao Palhinha suspended and Chalobah sent off inside eight minutes, it was never going to be Pereira’s day against Newcastle, with Fulham spending the afternoon on the back foot. The ex-Man Utd playmaker lost possession 20 times and won only a fifth of his 10 duels.

LF: Luis Sinisterra – 5.48
The Colombian has had a flying start to his Leeds career and he bagged a couple on international duty over the last fortnight. But against Villa, he demonstrated ‘the height of stupidity’, according to Roy Keane, while collecting a first-half booking, His second, which saw Leeds reduced to 10 men early in the second half, was arguably even worse.

RF: Jadon Sancho – 5.76
Playing off the left, Sancho was simply awful in the derby. The £72million winger failed with all three of his attempted dribbles; he lost all six of his duels; and gave City the ball back 13 times. Defensively, Sancho left Malacia and Shaw high and dry.

CF: Aleksandar Mitrovic – 5.73
Fulham had a brief panic when Mitrovic picked up a knock on international duty but the Serbia striker returned fit enough to face his former club – until he wasn’t. If it wasn’t already abundantly clear after losing a man and two goals, the sight of Mitrovic going down the tunnel towards the end of the first half told Marco Silva it wasn’t the Cottagers’ day. Not that the centre-forward offered much in his 37 minutes. Mitrovic had eight touches, losing possession with half of them. He also lost both of his aerial duels.