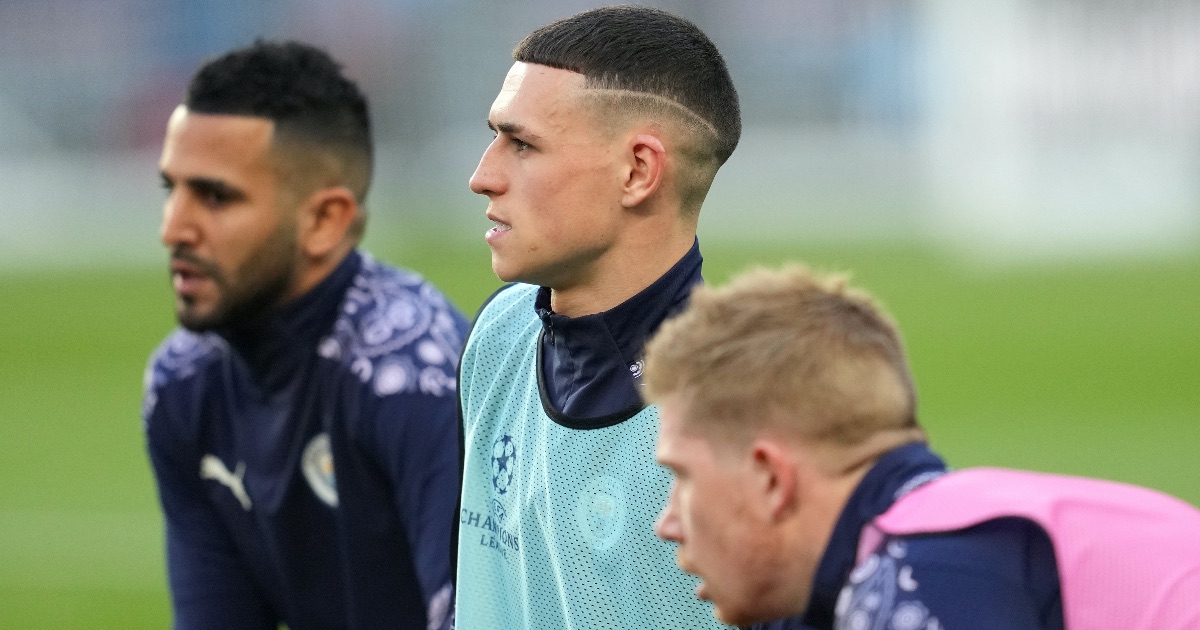 The ease with which Man City brushed Paris Saint-Germain aside was scary. It should come as little surprise that the players of the best team on the planet dominate our Premier League XI of the season so far…

Goalkeeper: Ederson (Manchester City)
He’s kept clean sheets in more than half his Premier League games this season and has the highest save percentage (77.5%) in the division. He would be the best goalkeeper if he was average with the ball at his feet, but he’s also comfortably the best at that.

That pass to Oleksandr Zinchenko was – I don’t want to go overboard here – the best thing anyone has done ever.

That man produces the goods once again! A massive goal for Man City!

And look at the ball from Ederson to start the move off 🤤 pic.twitter.com/i843btxu4J

The ball back to him from Ilkay Gundogan had some mustard on it and it looked as though Ederson slightly miscontrolled it, with the ball underneath his body rather than out in front of him. But that made the pass all the more ludicrous as he pinged it 80 yards into the path of Zinchenko. There are few things better than looks of that’s just not fair from opposition players in the wake of absolute artistry; there were plenty of those on the faces of the toys-out-of-pram brigade.

Right-back: Kyle Walker (Manchester City)
Who doesn’t enjoy a titter while watching the football? Those half-suppressed laughs can come about through a moment of genius or stupidity – anything really. The Kyle Walker chortles are predictable: when there’s a gap to close it’s giggle-ahoy. “Look at how slow Neymar is,” said no-one ever until PSG played Manchester City and Walker closed the gap on the Brazilian like he was an unruly puppy on a retractable lead.

“This kid is in the form of his life,” Rio Ferdinand said of Walker after the game on Tuesday; it’s very difficult to argue with that. With 27 right-backs vying for a place in Gareth Southgate’s England squad, Walker remains the first choice and rightly so.

Centre-back: John Stones (Manchester City)
A Google of ‘John Stones mistake’ provides over 13 million results. By way of comparison, ‘Virgil van Dijk mistake’ returns  just over 500,000. He’s got to “cut out the mistakes” said Roy Hodgson in 2016. “He makes mistake after mistake… Pep [Guardiola] just doesn’t trust him,” said Shearer two years later. The YouTube compilation videos are pretty damning – the brain fades were far too frequent to make him a top centre-back.

But the errors have now all but gone and the confidence is now reassuring rather than misplaced. He’s always been a Rolls Royce defender, but now the engine purrs without the need to stop and crank.

Centre-back: Ruben Dias (Manchester City)
He should win all the awards. He’s John Terry, Van Dijk and Nemanja Vidic and he’s only 23.

Left-back: Luke Shaw (Manchester United)
Manchester United have, for far too long, had full-backs because they’re a football team and that’s what football teams have. They’ve had the likes of Antonio Valencia or Ashley Young playing out of position, they’ve bought players that aren’t up to scratch or those that are stuck in the 90s.

Luke Shaw is actually an asset. Not someone plugging a hole or ‘doing a job’. Not someone good at one thing but crap at the other. He’s a brilliant all-round full-back.

Central midfielder: Ilkay Gundogan (Manchester City)
It could be his mild-mannered nature, seasons of being undervalued or through comparisons with his ginger-haired teammate, but Gundogan is unlikely to receive the plaudits he deserves come the end of the campaign.

He’s City’s top scorer (16) and was driving them to the title in the absence of the attacking verve we’re now seeing from the likes of Riyad Mahrez. The remaining members of this XI have been brilliant but mercurial to a certain extent. Gundogan has been outstandingly consistent; it’s weird how that continues to count against him.

He’s the best midfielder in the world and I have no ulterior motive for suggesting he should be Player of the Year. Ruben Dias may well have f***ed us all on that front.

Right wing: Riyad Mahrez (Manchester City)
He had scored two Champions League goals in his City career by mid-March. He now has six after four in three games against Dortmund and PSG.

That right side really is chuckle-city. For every ridiculous show of speed from Walker there are two or three outrageously good touches by Mahrez you can’t help but laugh at in admiration and bemusement. It’s the half-volley ones that are particularly drool-worthy, with the ball dropping out of the sky at any speed or trajectory, controlled with backspin to allow him to get on with the business of making a defender look stupid as soon as possible.

Attacking midfielder: Bruno Fernandes (Manchester United)
Welcome to Mad Stats featuring Bruno Fernandes. He’s missed 129 minutes of Premier League football this season. He’s started all but one Premier League game, when he was introduced at half-time to turn a 1-0 deficit into a 3-1 win over West Ham. He’s United’s top scorer (26) and top assist maker (16), has scored a goal every 156 minutes since he joined the club and contributed a goal or an assist every 92 minutes. The guy is a wonder.

Left wing: Phil Foden (Manchester City)
Genuine question: has there ever been a more a skilful English footballer?

There have been innumerable occasions when young English players have been lauded to ridiculous extremes: Jack Wilshere was better than anything that had come out of La Masia; Ross Barkley was the next Paul Gascoigne; Theo Walcott the next Thierry Henry.

The early extolling has made us understandably wary when tipping further ‘nexts’, but in Foden’s case, f*** the circumspection. What he’s done and is doing this season, in the biggest of big games, means we can throw all caution to the wind.

He’s one of the best footballers in Europe. He’s 20. He’s the Stockport Iniesta. He’s bringing it home.

This run from Phil Foden 🤤 pic.twitter.com/f22owAywPd

Striker: Harry Kane (Tottenham)
He’s the Premier League’s top goalscorer (21) and assist leader (13), directly contributing to 57% of Tottenham’s goals. He really is miles better than any other striker in the league, partly because there is a dearth of truly brilliant Premier League strikers, but mainly because he’s honed his game to near-perfection.