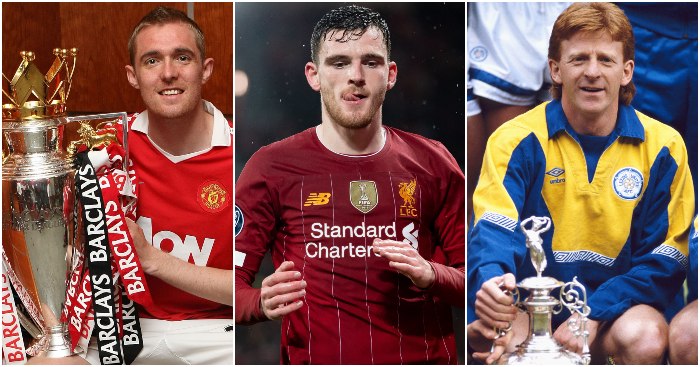 Neil Sullivan
Sullivan gets the gloves for his body of work over a 248-game career in the Premier League which stretched over 12 years. Andy Goram just misses out with his two appearances for Manchester United when Sir Alex Ferguson needed ‘that fat b*stard’ to stand in his goal while his other keepers were crocked.

The bulk of Sullivan’s Premier League graft was done in Wimbledon’s sticks and his place in the 1997-98 PFA Team of the Season illustrates why Tottenham swooped when the Dons were relegated in 2000. The English-born stopper, capped 28 times by Scotland, was named Spurs’ Player of the Year in 2001 before he moved to Chelsea to serve as Carlo Cudicini’s back-up. Not that Sullivan was finished as a No.1; he amassed more than 200 appearances in the Football League with Leeds, Doncaster and back at AFC Wimbledon.

Andrew Robertson
The Liverpool left-back once played for Queens Park? Why does no one ever talk about this?

📸 | Andrew Robertson, at the age of 18, playing for Queens Park. 🏴󠁧󠁢󠁳󠁣󠁴󠁿 #LFC

Robertson joined @queensparkfc after being released as a youngster by Celtic for being ‘too small.’ 🤔@andrewrobertso5 has come a long way! 👍 pic.twitter.com/q2mdld9yLm

David Weir
The former Scotland centre-back captained Everton under two Scottish managers, Walter Smith and David Moyes, in an eight-year career at Goodison Park. He made 269 appearances and was Toffees skipper when they had the briefest of dalliances with the Champions League in 2005.

After moving back to Scotland, Weir became the oldest outfield player to play in the Champions League when he lined up for Rangers in Europe aged 40 years and 211 days. He went on to be inducted in the Rangers Hall of Fame before a disastrous spell in charge at Sheffield United. Weir now oversees Brighton’s loan players.

Colin Hendry
As well as being put on his arse by Gazza at Euro ’96, Hendry is best remembered for being one of the driving forces behind Blackburn’s Premier League title triumph in 1995. He was taken to Ewood Park by Kenny Dalglish while Rovers were in the second tier and he stayed there for seven years before returning north of the border to Rangers.

However, he was back down south barely a year later after Dick Advocaat decided Hendry was ‘not my type of player’. He played 12 more games in the Premier League across spells at Coventry and Bolton. Age 52, he still couldn’t turn down a game…

He won the Premier League with Blackburn Rovers, captained Scotland at the World Cup – and now Colin Hendry can add an appearance for pub side Moorgate FC to his football CV. @RobbieSlater17 pic.twitter.com/FNPS1b9rNF

Steve Clarke
The current Scotland manager spent the bulk of his career down south at Chelsea, where he made 421 appearances after joining from St Mirren in 1987 for £422,000. Clarke admitted last year that he was thankful to the Blues for providing an escape from the sectarianism which still blights him.

“I wake up every morning and thank Chelsea for coming and taking me away from the west of Scotland because my children don’t understand this,” he said after Rangers fans acted the pr*cks again while he was managing Kilmarnock. Clarke certainly made the best of it at Stamford Bridge, winning the FA Cup, League Cup and European Cup Winners’ Cup.

Gordon Strachan
Another Scotland manager. And this one captained Leeds to the First Division title just before football was properly invented in 1992. By that time, he was already a nine-year veteran in the English game having first moved down south when Manchester United took him from Aberdeen in 1985.

Why did United get rid? “I decided this man could not be trusted an inch,” explained Ferguson in his autobiography. “I would not want to expose my back to him in a hurry.” Still, he’s fondly remembered by some United fans if only for one thing…

Gordon Strachan the cigar in front of the kop https://t.co/5fLuKHpvwB

Gary McAllister
Gary Mac was another Scot to lift the last First Division title with Leeds but United fans will have to scrap it out with Liverpool supporters over who loves him the most.

McAllister showed up at Anfield in 2000 to a suspicious welcome: “He seemed an odd buy,” Steven Gerrard recalled in his autobiography. “OK, he was once a terrific midfielder for Leeds United and Scotland, but McAllister was now 35, his best days surely behind him. I rang my agent, Struan Marshall, who knew McAllister well. ‘Stru, what’s all this about?’ I asked.

“‘Don’t worry, Stevie,’ replied Struan, ‘Gary Mac will be brilliant for Liverpool, and for you as well. Listen to him. Learn from him.’

Gerard Houllier described McAllister as his ‘most inspirational signing’. He wasn’t bad for Coventry either.

Darren Fletcher
The former Manchester United midfielder will do a job on the right because he’s just that kinda guy. It was on the wing where he started his United career, though his performances on the flank gave no hint whatsoever to how good he would be in the centre of Ferguson’s midfield.

Roy Keane certainly wasn’t impressed, not initially at least: “I can’t understand why people in Scotland rave about Darren Fletcher,” said the United skipper as part of the infamous interview with MUTV which effectively ended his career at Old Trafford.

But Fletcher went on to become vice-captain at United while winning the lot over 342 appearances in a United shirt. He would surely have taken the armband permanently had illness not halted his career after becoming one of Ferguson’s most-trusted players. Upon being granted a free transfer by Louis van Gaal, Fletcher did skipper West Brom before finishing his career at Stoke.

Kevin Gallacher
Gallacher played either on the wing or through the middle during a 12-year career in England after moving south from Dundee United to Coventry in 1990. He was signed by Blackburn for £1.5million in 1993 to cover for Alan Shearer and he remained at Ewood Park for six years, though a broken leg restricted him to one appearance in their title-winning season.

He contributed to that triumph, however, since his goal in that single game against Palace proved to be the winner during a season in which the title was decided on goal difference. After 52 goals for Rovers, Sir Bobby Robson made Gallacher his first signing as manager of Newcastle, where the 53-cap Scotland international returned to the wing.

Duncan Ferguson
Duncan Disorderly would be the first name on the imaginary team sheet because, well, he’s hard as f*ck.

Not that Jamie Jackson was scared. In The Guardian in 2003, the Paradise Kid branded Ferguson ‘arguably the biggest waste of money of all’. But Evertonians don’t see it that way. They took Big Dunc to their hearts in two spells as a player before he became assistant and caretaker manager.

He also hospitalised two burglars daft enough to break into his home. But maybe he’s a big softie at heart…

Big Dunc with a message to everyone, everywhere in these difficult times. #bluefamily pic.twitter.com/jz4xVahByW

Steven Fletcher
How is Fletcher still only 32? Head’s gone.

That’s not the only surprising thing about the Sheffield Wednesday striker who scored 10 goals in 33 Scotland caps. His goals record in the top flight was pretty decent too, with the former Hibs forward netting 53 goals in 189 Premier League appearances for Burnley, Wolves and Sunderland, who were all relegated with Fletcher on their books.

And remember when he played for Marseille? But seriously, he must be at least 40 by now…