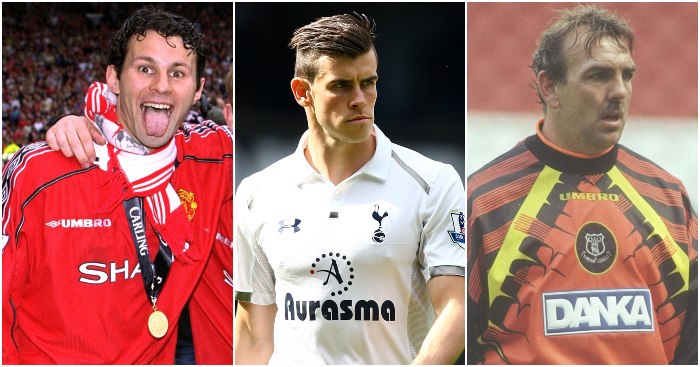 We’ve had the flowers of Scotland. We reckon Wales would take them. Just look at that midfield…

Neville Southall
The Everton No.1 was regarded as one of the best goalkeepers in the world during the 1980s but he was still plucking balls out of the Toffees’ top corner throughout the first five years of the Premier League. Indeed, he was the first player to reach 200 appearances in the brave new world.

Southall was beast of a goalkeeper for 750 Everton appearances and he remains a giant of a man. He has used his platform on Twitter to help sex workers, highlight LGBT issues, and call Piers Morgan ‘a massive cock’.

But for those of you to young to remember what a colossus he was between the sticks, enjoy…

Ashley Williams
For anyone who watched Williams boss the Swansea defence in the Premier League between 2011 and 2016, it would have been unfathomable to think that the 86-cap centre-back would be flailing back in the Championship.

Williams was linked with most of the big six, especially Arsenal, and foreign clubs like Napoli but his big move eventually took him to Everton, where he struggled to exert the same influence he had at Swansea. He has remained a consistent presence in the Wales team but Williams’ slide has been as surprising as it was rapid.

James Collins
The former West Ham and Aston Villa defender makes the XI for sheer consistency and the absence of any appealing alternative.

Collins was a Premier League player for 13 seasons after joining West Ham from Cardiff in 2005. He struggled to nail down a regular start at Upton Park but he had no such problems after moving to Villa in 2009, making 108 appearances in three years at Villa Park. Collins was more prominent at West Ham after returning to the club in 2012, sticking around for six years while taking his total of Wales caps to 51.

Ben Davies
Mark Bowen might consider himself unfortunate for missing out but Davies, with 52 caps, has more than the former Norwich left-back and the Tottenham defender has spent his entire senior career in the Premier League. Them’s the breaks.

Davies offers an understated presence on the left, which contrasts so sharply with Spurs other full-back options. He’s seen off Danny Rose to Newcastle, while Serge Aurier’s all-action, all-drama approach highlights just how steady Davies is on the opposite flank. Jose would love him even more, though, if he was a centre-back…

Chris Gunter
Ok, Reading’s former-Tottenham right-back Gunter has spent 13 of his 16 seasons as a senior pro in the Championship, but we can’t leave out Wales’ most capped player of all time.

Gary Speed
A bonafide Premier League legend remembered fondly by all the clubs he represented over 841 senior appearances. Only four players have played more Premier League games (though follow Leeds academy graduate James Milner will draw level the next time puts his puts on, whenever that may be) than the 535 Speed turned out for in the colours of Leeds, Everton, Newcastle and Bolton.

Aaron Ramsey
The Juventus midfielder dovetailing with Speed would be a sight to behold.

Arsenal’s failure to tie Ramsey down to a new deal before he walked away for nothing last summer highlights the shambles among the leadership at the Emirates. Ramsey blossomed into one of the Premier League’s best box-to-boxers after joining the Gunners as a youngster from Cardiff, with Steven Gerrard describing him as “the best attacking midfielder in the Premier League in 2015.

Ramsey was named Arsenal player of the year twice and if there is any truth in reports Juve might sell the 29-year-old this summer, there should be a queue stretching from Turin back to north London.

Ryan Giggs
The Manchester United legend has pulled rank and it is he rather than Bale who will start on the left, since the Real Madrid star can at least stand on his right foot.

Still, Giggs could play a bit on his left…

He may have gone into a weird state of semi-retirement while dividing his time between Real and Madrid’s finest golf courses, but let’s not forget how sensational Bale was for Tottenham, especially given the start he endured at White Hart Lane. The former Southampton youngster was seen as a jinx during 24 winless games at the start of his Spurs career around which time they considered chucking him in a part-exchange deal with Reading for Stephen Hunt.

Craig Bellamy
A pain in the arse for anyone he played against, and the same for many he played with or under, illustrated by the fact the Wales striker had 11 spells at nine different clubs. It’s fortunate for Bellamy that he was usually worth the hassle.

Bellamy was never a prolific scorer – he never scored more than 13 goals in a Premier League season and only twice did he notch double figures – but he did a lot of dirty work for his strike partners. And he holds the record for having scored for seven clubs in the top flight – more than anyone else.

Mark Hughes
Sparky is a hard manager to warm to but what a player! What a chest and what magnificent thighs!

Hughes did much of his best work for Manchester United while the Premier League was just a glint in the eye of First Division executives but he was still top scorer for the Red Devils when they ended their 26-year title drought in 1992-93. He won the Double a year later before moving on Chelsea, Everton and Southampton.

OTD 94 – a classic performance from Fergie's first great side, during which Mark Hughes breaks the land speed record, with a football. pic.twitter.com/fWyADjppDD