Home F365 Features 15 English lads feature in the Premier League young players of the season: one per club 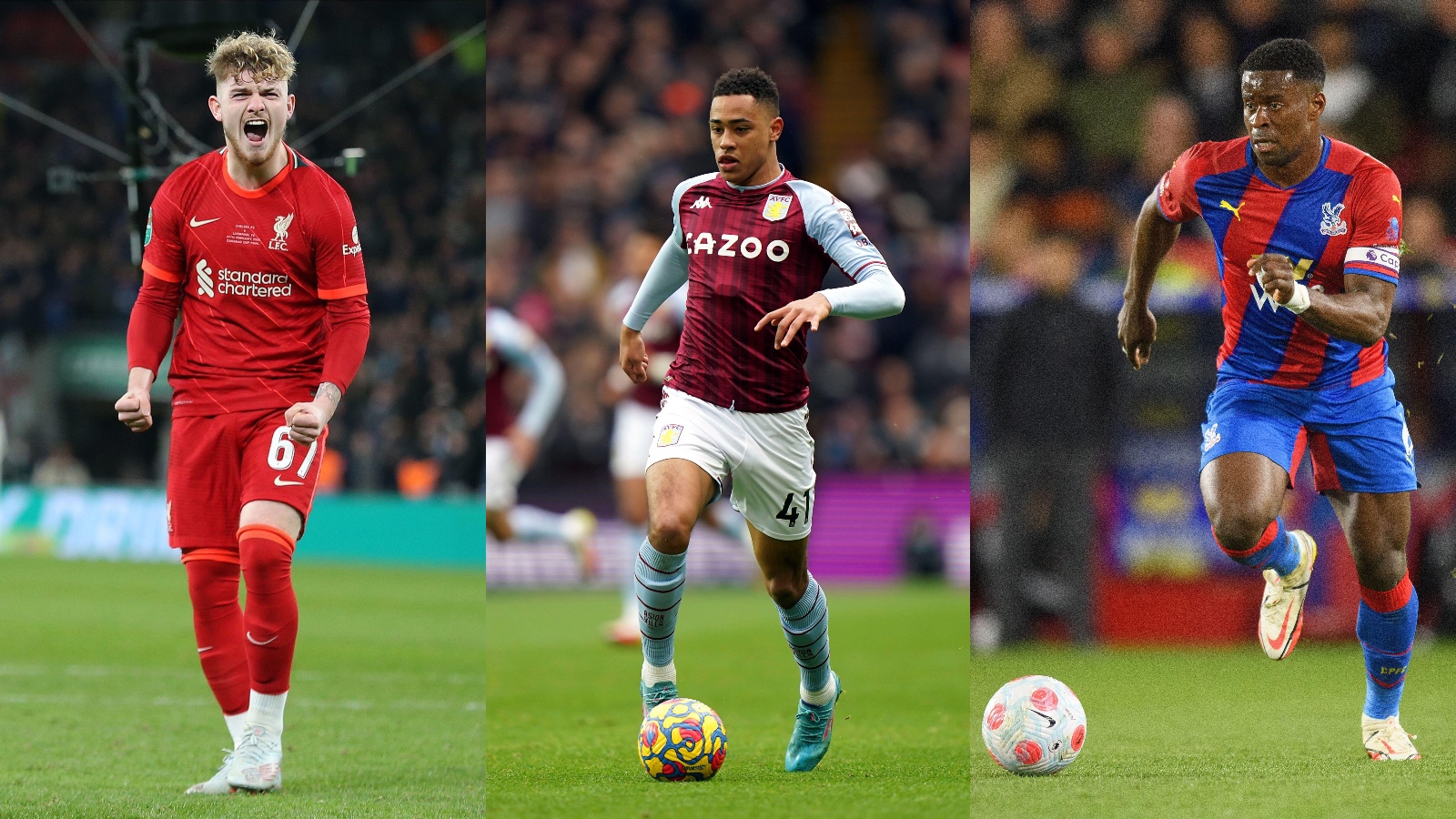 It’s time for the Premier League young players of the season. Not 25-year-old footballing middle-agers – actual youngsters. Players must have been 21 or younger at season start.

Arsenal: Bukayo Saka
He’s played close to three full seasons for one of the biggest clubs in England, contributing 23 goals and 28 assists, is a mainstay in Gareth Southgate’s England squad and has taken (and missed) a penalty in a major tournament final. The kid doesn’t turn 21 until September. He’s Arsenal’s leading Premier League goalscorer with 11 so far this season, starting 33 of their 35 games. Champions League football is vital for Arsenal for plenty of reasons, but keeping Saka content is perhaps chief among them.

Aston Villa: Jacob Ramsey
An English midfielder who can dribble with the ball and beat players is less of a rarity these days, but it’s still enough to make you sit up and take notice. It feels like that ability to run at pace with the ball under close control through the middle of the pitch is a better gauge of talent than almost any other, and Ramsey is very, very good at it.

Jacob Ramsey picked it up and went solo 😳🔥 pic.twitter.com/EjseeeKKMp

Brentford: Bryan Mbeumo
We’ve cheated slightly here as Mbeumo actually turned 22 the week before the season began, but it felt like a better option than including 19-year-old Finley Stevens after his 14 minutes this season. The Frenchman has formed a formidable partnership with Ivan Toney for Brentford, with his pace and Toney’s ability to find him a thorn in many a Premier League side. If only he could finish; Mbeumo has comfortably the worst goals minus expected goals of anyone in the top flight on -5.2.

Brighton: Moises Caicedo
Having spent the first half of the season on loan with Beerschot V.A. in Belgium, Caicedo returned to Brighton in January and marked his first Premier League appearance just over a month ago with a brilliant assist in the 2-1 win over Arsenal, and he’s started every game since, scoring his first league goal against Manchester United. Not bad.

Burnley: Dwight McNeil
Here he is, the saviour of many a one per club. No goals and just one assist in the Premier League, but he’s started all but three games and continues to perform at a level which puts him right at the top of the WhoScored rankings for the club. It would be really, really interesting to see how he would do at any other top-flight club.

Chelsea: Reece James
As has presumably been the case throughout his career, Reece James continues to be the big kid on the playground. Not only does he have the physicality, but also that air of petulant authority – ‘How dare you try and take the ball off me?’. He’s absurdly consistent whether he’s playing at wing-back, on the right of a back three, or drifting into midfield, and could probably do a very reasonable job up front or with the gloves on.

Crystal Palace: Marc Guehi
Plenty to choose from in Patrick Vieira’s team of young upstarts. Tyrick Mitchell and Michael Olise have been excellent, but Guehi has recently been handed the captain’s armband, such has been his positive influence on this side. He’s obviously a very good defender and all-round footballer, but among his greatest strengths is his poise, which is rare for a centre-back with so much of his career ahead of him. A future England captain?

Everton: Anthony Gordon
In some ways, Everton being in a relegation battle has worked in Gordon’s favour. He very clearly cares, and when you’re in a scrap and those around you aren’t ‘putting it in’, simply running around is enough to earn the affection of the fans. But there is undoubtedly some real talent there – Carlo Ancelotti, Rafael Benitez and Frank Lampard can’t all be wrong.

Leeds: Joe Gelhardt
Illan Meslier, the other viable candidate, hasn’t had a good season (even before his howler against Arsenal). His save percentage of 65.7% is the fourth worst in the division. So Gelhardt it is. He’s got a bit of the Wayne Rooneys about him, with barrelling runs and a low centre of gravity, and Leeds would already be dead and buried without his last-gasp winner against Norwich.

Leicester: Luke Thomas
Everything about Leicester this season has been incredibly flat. Has anyone played really well or really badly? Have there been any outstanding performances? It’s all been very ‘meh’. Thomas has played a lot, not that we’ve particularly noticed.

Liverpool: Harvey Elliott
It’s a pretty damning indictment of Curtis Jones’ season that Elliott has been Liverpool’s best young player despite playing just 30 minutes of football after his horrible injury at the start of September. Elliott did not look out of place as he started three of their first four league games of the season, but Jones has really struggled to kick on from what looked like an excellent platform.

Manchester City: Phil Foden
Although Pep Guardiola frequently tinkers with his team in City’s biggest games, he invariably includes Foden. The 21-year-old has started all but one of their Premier League clashes against Big Six opposition, with perhaps the one truly massive game he hasn’t started this season the first leg against Atletico Madrid, when he came on to brilliantly assist Kevin De Bruyne. The best of the young bunch.

Manchester United: Jadon Sancho
He’s not been great, but who would have been? The poor b*stard thought he had made his dream move and woke up in a nightmare. He had to adapt to the Premier League amid squad rifts, changes of management and general nonsense at a club in turmoil. His flashes of brilliance this season are just enough to hold off a late charge from Anthony Elanga.

Newcastle: Joe Willock
A default selection, with 24-year-old Jamal Lewis Newcastle’s next youngest player to feature this season. Willock scored in seven games on the bounce to end his loan spell with Newcastle last term, but has added just two further goals to his Toon tally since making his move permanent. Unusual for someone to be both the best young player, and also the flop of the season.

Norwich: Brandon Williams
We have absolutely no idea why he was abused by Norwich fans – he’s been pretty decent in a rotten team. We’re sure he will be glad to return to the Old Trafford haven in the summer.

Southampton: Valentino Livramento
A close call between the two signings from Chelsea, with Armando Broja’s goalscoring form deserting him in recent weeks and Livramento struggling, worryingly, with persistent knee problems. But when fit, the right-back has been a joy to watch and a tough opponent in both defensive and attacking thirds.

Tottenham: Dejan Kulusevski
Three goals and eight assists – no-one was expecting it to go quite this well. Antonio Conte has referred to the 22-year-old as the “present and future” for Tottenham in a hugely impressive loan spell from Juventus, suggesting they will stump up the £25m to sign him permanently. That looks like a bargain.

Watford: Joao Pedro
One of a number of mercurial Watford players, along with Ismaila Sarr and Cucho Hernandez, who could move in the summer, stay in the Premier League and be brilliant. But could just as easily be a huge waste of money. It feels as though they all just need a really good coach.

West Ham: Ben Johnson
Slim pickings at West Ham with Johnson really the only viable option. But although it is a default selection, the full-back has put in some impressive performances on the right and left this season. He’s not flashy but dependable.

Wolves: Rayan Ait-Nouri
Ait-Nouri has flown under the radar, as Wolves as a whole have done for most of the season. The £10m summer signing has got four assists from left-back, more than any other Wolves player, and man’s got skills to boot…

A lovely bit of skill from Rayan Ait-Nouri ✨ pic.twitter.com/XSFLkp9MNH