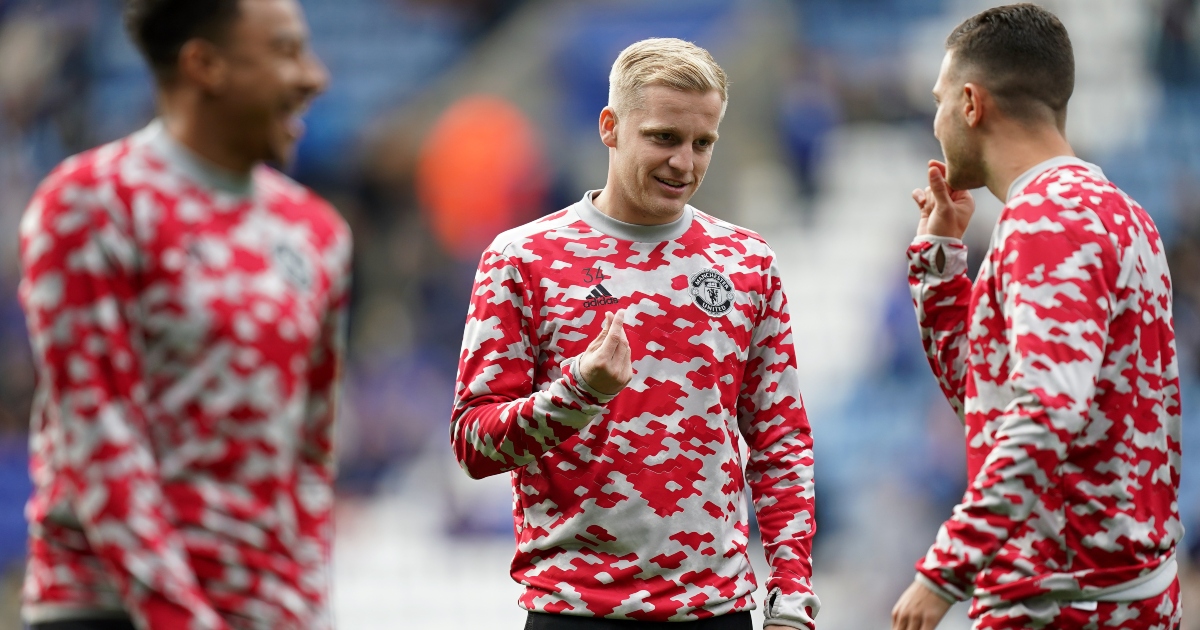 According to ESPN, the fringe players are upset over Solskjaer’s reluctance to rotate with some ‘feeling they have been misled over their prospects’.

So we’ve ranked the players named in the report in order of their grievance, from ‘unreasonable’ to Donny van de Beek…

8) Anthony Martial
It’s hard to know if Martial feels aggrieved or not since he always has a face like a slapped arse. Which is perhaps a sh*tty stick to beat the forward with, but he cannot argue that the tone of his body language has not reflected the quality of his performances over the last year.

The Frenchman has surely had enough chances to prove himself. We are more than six years into his Old Trafford career and still we’re not sure of his best position. He sees himself as a centre-forward despite seemingly lacking the appetite or nous to shift centre-backs around, and while his skillset seems to lend itself to a wide role, United have better options off the right and left.

We know Martial is capable in moments, but we can also assume by now that he won’t ever be consistent enough to hold down a regular place in Solskjaer’s XI.

7) Dean Henderson
Mate, you can’t be p*ssed if you’re not available…

Henderson and David De Gea engaged in a season-long battle for the No.1 spot last term, which neither keeper really won. It seemed to come down to Solskjaer’s judgement and De Gea taking the gloves for the Europa League final was the biggest hint at the manager’s verdict.

Neither keeper could really have complained had the decision gone against them, but the difficulty of shifting De Gea was always likely to count against Henderson and it seemed likely that the England back-up would be moved on in the summer.

Then he got injured before catching a dose of the ‘rona on his first week back in training. He took a while to recover and wasn’t fit to take his place on the bench until late September.

In the meantime, De Gea has been one of the few United players to emerge from the last couple of months with any credit, despite a couple of errors along the way. Though you can hardly blame him for feeling jittery playing behind a Raphael Varane-less defence featuring…

6) Eric Bailly
The centre-back might have had reasonable grounds for complaint when Solskjaer wheeled out an unfit Harry Maguire at Leicester a month ago, but Bailly keeps blowing the few chances he gets.

Bailly has started three games this season, one in each competition United have played. Against Atalanta, he was his usual all-action self and he made some important, last-ditch interventions. Then against City he volleyed one into his own net and we saw the other side of his kamikaze defending.

Bailly cannot be trusted to go more than a game or two without some form of brain fart; nor can he be relied upon to stay fit. Not since his first season after arriving in 2016 has he managed more than 11 starts in the Premier League. That’s not just because Solskjaer hasn’t fancied his white-knuckle brand of defending.

5) Juan Mata
Lovey Juan wouldn’t complain, surely? If we must pretend that he has had a moan then Mata would be on pretty shaky ground.

The 33-year-old started 11 games in all competitions last term and that was before they signed Jadon Sancho and Cristiano Ronaldo to further limit Mata’s opportunities.

In the brief statement to confirm Mata’s new contract, United didn’t try to hide what he is most useful for: ‘The World Cup winner’s influence on the young, improving squad is invaluable,’ they said, and we have to assume Solskjaer was clear about Mata being a bigger asset off the pitch than on.

Even if the manager wasn’t entirely honest, Mata is a clever bloke; he could have seen that for himself.

4) Alex Telles
The Brazilian would have struggled to make a case for inclusion over Luke Shaw last season. After a wretched start to the campaign, which prompted the signing of Telles, Shaw pulled his finger out and emerged as one of the best-performing left-backs in Europe.

This season, though, has been a very different story. Shaw is one of two United defenders suffering a massive hangover from the Euros – he’s been awful at times, making big mistakes in the humiliating defeats to Liverpool and Manchester City.

If Telles is to get a chance, it will surely be after this international break. Though it might not be at the expense of Shaw if Solskjaer opts to move the England defender inside and allow Telles to fly up and down the left flank. If opportunities are not forthcoming, then the former Porto defender might want to think about pushing for a move in January.

3) Diogo Dalot
Dalot is in a similar position to Telles. If he isn’t going to get a chance now, then he probably never will.

The Portugal defender is everything Aaron Wan-Bissaka is not: decent going forward but raw in defence.

Wan-Bissaka’s critics have mainly focused on his attacking play since he joined United for £45million but there have been serious questions about his defensive nous in recent weeks. He has made inexplicable decisions when playing as a full-back and a wing-back.

Dalot’s problem is that Solskjaer clearly doesn’t fancy him and doesn’t appear open to persuasion. The best Dalot can hope for is a new manager in the not-too-distant future.

2) Jesse Lingard
United’s treatment of Lingard has been weird. Not necessarily led by Solskjaer, rather whoever makes the decisions over player sales.

Lingard is out of contract at the end of this season. For the second half of last season, he tore it up at West Ham, which was perfect for all concerned. Especially United, who saw a depreciating asset bump up his value.

But not to the level that United seemed to believe. Apparently they wanted £30million for Lingard, which the likes of West Ham rightly ignored. But instead of reaching a fairer valuation, United chose to keep Lingard and pay him £100,000 a week, all the while knowing he would be a fringe player before losing him for nothing next summer.

You can’t blame Lingard for wanting to stick around at his boyhood club if he was given the sniff of a chance during the summer. And Young Boys aside, the England forward has made a pretty good fist of the limited opportunities that have come his way. But his contract status puts Lingard in control of his own destiny.

1) Donny van de Beek
Solskjaer, though, is primarily responsible for the bizarre predicament Van de Beek finds himself in…

The manager doesn’t fancy Van de Beek, that much is clear. Even when Jose Mourinho was dishing out his tough love to the likes of Henrikh Mkhitaryan and Luke Shaw, he occasionally chucked them a bone in the form of the odd game. Van de Beek, though, seems to have been used by Solskjaer only when he has absolutely no other choice.

Players will often leave a club and complain about the lack of opportunities, but Van de Beek’s grievance will be genuine when he leaves Old Trafford. Be it in January or next summer.

Unless Solskjaer is suddenly minded to give Van de Beek a chance now in the wake of the Stretford End’s long and loud appreciation for the Dutchman during the second half of the derby. That was as close as you will hear to the Old Trafford crowd turning on Solskjaer and it won’t have escaped the Norwegian. When he loses the match-going fans, the manager will know he’s really f***ed.