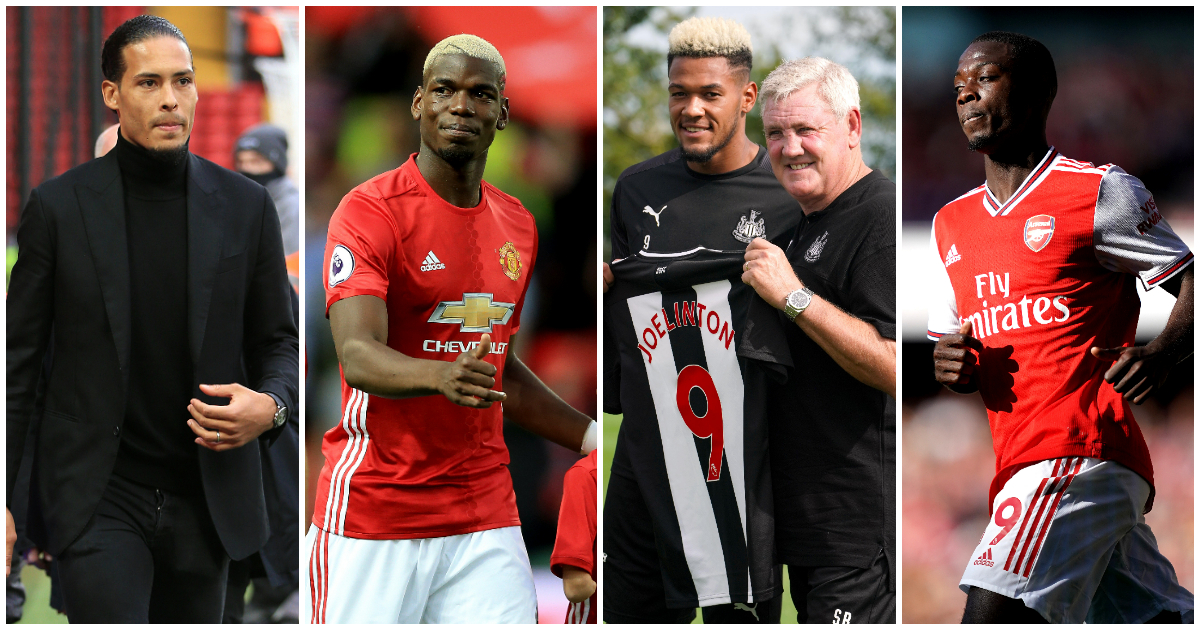 The list of record signings in the Premier League doesn’t offer a great hit rate. Here’s how we’ve ranked them…

19) Tottenham Hotspur: Tanguy Ndombele
Antonio Conte seems to have reached a similar conclusion as Mauricio Pochettino, Jose Mourinho and Ryan Mason – Ndombele cannot be trusted. The France midfielder has shown occasional glimpses of why Spurs paid Lyon £54million in 2019 but never anything like the consistency required to establish himself in a Spurs midfield hardly bursting with quality. Booed off on Sunday and set to be off in January…if Spurs can find a patsy to pay his wages.

18) Wolves: Fabio Silva
It always looked like a gamble to pay £35million for an 18-year-old with only 12 senior appearances to his name when he arrived from Porto in 2020. We are yet to see any indication that gamble might pay off, with the teenager yet to start in the Premier League under Bruno Lage, while his presence did little to compensate for Raul Jimenez’s absence last season. There was talk of him being loaned out this month, but then he turned in his best performance under Lage in the FA Cup win over Sheffield United.

17) Norwich City: Christos Tzolis
It’s a little early to judge the 19-year-old as he’s played more than 45 minutes in the Premier League only twice this season since joining from PAOK for a shade under £10million, but we’ve also yet to see much evidence of Daniel Farke’s claim that Tzolis was “in his age group, one of the most exciting players across European football”. Farke was rather less complimentary when Tzolis disobeyed team orders by taking, and missing, a penalty in the Carabao Cup defeat to Liverpool.

15) Newcastle United: Joelinton
Joelinton would have been even further down the list had he not suddenly turned himself into a midfielder. Which is handy since he damn sure isn’t a centre-forward. But he never was before he joined Newcastle; his scoring record in Austria and Germany is evidence of that. One day, we’ll find out what prompted the notoriously thrifty Mike Ashley to suddenly smash Newcastle’s transfer record for a player Rafa Benitez didn’t actually want.

16) West Ham United: Sebastien Haller
The centre-forward scored 14 goals in 54 games after arriving from Eintracht Frankfurt for £45million in 2019 and it was quickly evident that he wasn’t the answer to the Hammers’ goalscoring problems. Then he went to Ajax, at a £25million loss to West Ham, and tore up the Champions League. Still, West Ham aren’t doing all that badly in his absence.

14) Leeds United: Rodrigo
Rodrigo has played across and behind Leeds front line but Marcelo Bielsa will have hoped for more than the nine goals the 30-year-old has brought since the Whites forked out £27million to sign him from Valencia at the start of last season.

13) Crystal Palace: Christian Benteke
Palace haven’t managed to properly replace Benteke, which perhaps says more about their recruitment than it does about the Belgium striker. Benteke netted 15 goals in his first season at Selhurst Park after moving from Liverpool for £27.5million in 2016, then scored three, one and two goals in his next three seasons. He hit double figures – just – last season, just in time to secure a new contract, but the same doubts remain over the striker. He always looks just as likely to miss as score, wherever the ball finds him.

12) Manchester United: Paul Pogba
This really depends on where you stand on the Pog-spectrum. Is he a work-shy liability interested only in his own ends, or one of the game’s most gifted midfielders tragically wasted by United? Perhaps it’s neither, maybe it’s both. Either way, in five-and-a-half years at Old Trafford, Pogba has never come close to displaying the kind of consistency needed to be classed as one of the best in the world, having spent most of the last four years trying to escape United. He’ll do just that in the summer, when United will lose their biggest investment for f*** all. So, all in all, it’s a massive stretch to label Pogba’s return a success.

11) Arsenal: Nicolas Pepe
The Ivory Coast winger has shown some signs that he might prove useful to Mikel Arteta, but when you need an ‘internal investigation’ as to why the £72million purchase from Lille was sanctioned, you know you’ve f***ed it.

10) Aston Villa: Emiliano Buendia
The Argentina playmaker has had an underwhelming start to his Villa career, showing glimpses since joining from Norwich last summer for £33million but rarely the consistency required to cover for Jack Grealish’s exit. Buendia had one of his best games for Steven Gerrard last week in the defeat at Brentford but not so good that the manager wasn’t tempted to pass up the chance to sign Philippe Coutinho. Buendia could play in the same side as the Brazilian new boy, but with Villa’s other attacking options, the ex-Norwich star needs to shape up sharpish.

9) Chelsea: Romelu Lukaku
Lukaku’s Chelsea return got off to a bright start but that feels like a long time ago. In the time since, Lukaku has managed only 90 minutes once since the start of October, and though he scored twice in two games between Christmas and New Year, he was subsequently made to apologise for an interview in which he discussed his unhappiness at Chelsea while flirting with Inter Milan, who trousered £97million by sending the Belgian to Stamford Bridge. It’s been a common theme throughout Lukaku’s career which could take him elsewhere after only one season back at Chelsea if reports are to be believed.

8) Manchester City: Jack Grealish
The £100million man admitted that he has struggled a bit at City. “I’ve found it a lot more difficult than I thought I would, adapting to a new manager and team-mates,” he said last month. “At first I thought I’d have more of the ball, get more assists and goals but it doesn’t work like that at all.” Pep Guardiola doesn’t seem overly concerned at three goals and three assists in 21 appearances, but there’s no doubt that there’s more to come from Grealish.

7) Brentford: Kristoffer Ajer
The Norway centre-back got off to a fine start at Brentford before he was struck by a hamstring injury that kept him sidelined for two-and-a-half months. Ajer returned to action in the FA Cup win at Port Vale and was largely flawless, prompting Thomas Frank to offer this tribute: “There was a reason why we paid quite a lot of money for him. I think he’s a great centre-back that offers something special and extra. Especially when you play with him as an outside centre-back because he’s so good to carry the ball, run through lines and dribble and pass it. He’s a big thing for the offensive part of the play, so it’s good to have him back.” Ajer looks like a very astute addition but we’ll get more chance to judge when the Bees face Southampton, Liverpool and Man Utd in the next eight days.

6) Brighton: Adam Webster
Before we rate Brighton’s record signing, first we have to figure out whom it might be. The Seagulls signed Webster from Bristol City in August 2019 for a fee reported to be in the region of £20million, and then they were said to have equalled that outlay when buying Neal Maupay from Brentford three days later. And some sources suggests Enock Mwepu cost a similar amount, but we’ll go with Webster on account of him being first. And a decent signing he has been. So much so that Graham Potter has given the 26-year-old the armband on a few occasions while tying down the versatile defender to a new five-year contract last summer.

5) Watford: Ismaila Sarr
Sarr was a raw winger when Watford plundered him from Rennes for £40million in 2019, but he has since developed into one of the most sought-after wingers in the Premier League. In the Championship last season, he was the Hornets’ top scorer. Even if Watford go back there next season, they can at least bank on getting their money back on the Senegal star.

4) Burnley: Chris Wood
Burnley have steadfastly refused to spend over £15million on any one player, with the Clarets forking out that sum on Wood in 2018 and Ben Gibson a year later. If Wood was the first, he was certainly the best since Gibson managed only 62 minutes in the Premier League for Sean Dyche, with the Clarets fortunate to get half their money back when Norwich took him last summer. Wood, though, has netted at a steady rate and has become the latest target for Newcastle. Burnley wouldn’t sell their best striker to their biggest relegation rival, would they?

3) Southampton: Danny Ings
Even if Ings hadn’t been a success at St Mary’s he was worth the £20million paid to Liverpool just to remove Guido Carrillo as their most expensive signing ever. But Ings was a big hit, scoring 46 goals in 100 appearances to win back an England place and secure Saints a tidy profit when he was sold to Villa last summer.

2) Leicester City: Youri Tielemans
Simply scoring the winner in the FA Cup final would have made Tielemans a bargain at £40million, but the Belgium midfielder has done so much more since arriving from Monaco, initially on loan, before a permanent switch in 2019. Tielemans has established himself at Leicester as one of the best all-round midfielders in the Premier League, which will see a queue form for his signature if it’s not scribbled on a new Foxes deal before next summer.