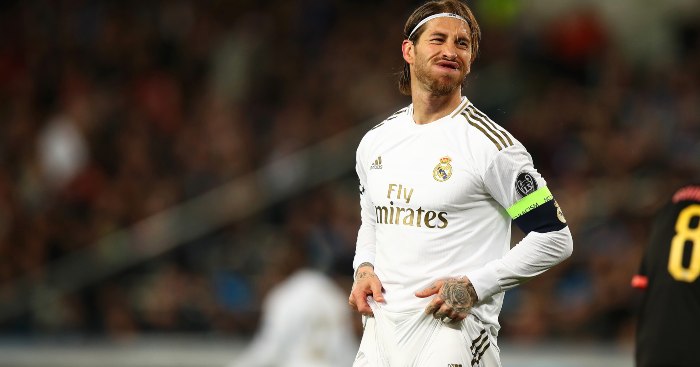 Sergio Ramos received his marching orders for the 26th time on Wednesday night when Real Madrid capitulated to Manchester City. It was his eighth straight red card to go with 18 pairs of yellows.

Never has Ramos been sent off for Spain, but while representing Real, the captain has been dismissed 20 times in La Liga; on four occasions in the Champions League; and twice more in the Copa del Rey.

You can watch his domestic red cards here but if, like most people, you don’t have that kind of spare time, we’ve ranked all of them for you in order of ridiculousness…

25) 2005/06:  Real Madrid 3-3 Villarreal
Ramos managed to divert a few of the headlines from Zinedine Zidane’s final game by receiving his marching orders for blocking a goal-bound shot with an arm. Perhaps both yet possibly neither.

24) 2013/14: Osasuna 2-2 Real Madrid
Real were two goals down by the time Ramos was booked twice, though he would argue – reasonably on this occasion – that both were harsh. The second came after shielding the ball resulted in an Osasuna player walking into his arm.

23) 2013/14: Real Madrid 3-4 Barcelona
Clipping Neymar as he went in on goal was hardly Ramos’s most heinous crime but his dismissal saw Barca come from behind to win a pivotal Clasico.

22) 2009/10: Atletico Madrid 2-3 Real Madrid
Ramos was tantalisingly close to playing the ball in a last-man sliding challenge on Sergio Aguero as the Atletico striker entered the box. Just not close enough.

21) 2013/14: Real Madrid 4-1 Galatasaray
It was an early bath before the half-hour mark after being dismissed for a last-man challenge on Umut Bulut.

20) 2007/08: Mallorca 1-1 Real Madrid
It’s not often Ramos just dangles a leg but even that was enough to earn a second yellow card after receiving his first for a handball.

18) 2005/06: Real Sociedad 2-2 Real Madrid
Real were two goals down when Ramos, already on a booking, lunged into a tackle by the touchline claiming he played the ball. He did not.

17) 2015/16: Las Palmas 1-2 Real Madrid
Ramos was already on a booking when, late on, he caught the hosts’ captain Momo with a sneaky trailing leg. Not sneaky enough, apparently.

15) 2017/18: Deportivo 0-3 Real Madrid
After clashing with Fabian Schar to earn his first caution, Ramos waited until stoppage time to take his second for jumping arm-first into Borja Valle.

14) 2011/12: Barcelona 2-2 Real Madrid
Two yellow cards in this Copa del Rey semi-final: one for dissent; another for sticking his arm into Sergio Busquets’ face under the guise of challenging for a header. The second caution earned the referee a pass-agg handshake for his bother.

13) 2007/08: Recreativo 2-3 Real Madrid
Ramos was one of three players dismissed, with the Real defender seeing red for elbowing Florent Sinama-Pongolle just a few minutes after being booked for a two-footed challenge.

12) 2005/06: Espanyol 1-0 Real Madrid
You always remember your first, and Ramos’s came following two second-half cautions, the second of which was a result of abruptly halting a late counter-attack.

11)  2005/06: Olympiacos 1-2 Real Madrid
Ramos’s second Real red arrived 11 days after his first; this one a straight dismissal after reacting to Giannakis Okkas’ challenge in added time.

Ryan Giggs got one red card in 1031 senior appearances in his career. To have equalled Sergio Ramos' number of red cards for Real Madrid, he would need to have played 26,806 games.

10) 2017/18: Athletic Bilbao 0-0 Real Madrid
Wearing a face mask, Ramos was apparently intent on making it a trend but instead, his two bookings for raising his arm on separate occasions only resulted in the Real captain setting a new La Liga record with his 19th dismissal.

9) 2018/19: Real Madrid 1-2 Girona
Ramos had gone just over a year since his last red card prior to being dismissed against City. His last red card, though, was a doozy. With Real 1-0 up at home to Girona, Ramos conceded a penalty for blocking a goal-bound shot with his hand. Nothing out of the ordinary there. But after Girona scored the spot-kick and subsequently took the lead, Captain Marvel set about righting his wrong by attempting a last-gasp overhead kick. He failed to connect with anything but an opponent, and rather than wheeling away in celebration, he was walking off in shame for the 25th time.

8) 2015/16: Barcelona 1-2 Real Madrid
After picking up an early booking at the Nou Camp, Ramos made it all the way to the 84th minute before crunching Luis Suarez from behind. No matter. Cristiano Ronaldo scored a late winner to give Real the win and end Barca’s 39-game winning streak.

7) 2011/12: Villarreal 1-1 Real Madrid
Ramos wasn’t alone in being given his marching orders during a draw at Villarreal. Something horrific must have provoked Mesut Ozil into getting himself sent off, while Jose Mourinho and Rui Faria, rather less surprisingly, were also dismissed from the bench, with Mourinho allegedly insulting the ref’s mother.  Ramos’s indiscretion? Booting Nilmar in the balls and sticking in the elbow while already on a caution. That’ll do it.

6) 2012/13: Real Madrid 4-0 Celta Vigo
Ramos might argue that his first booking was harsh following a disagreement with some Celta Vigo opponents, but the second caution was worth a couple in itself, with Ramos missing a tackle but catching his man with studs to the chest as he hit the deck. Ramos didn’t take it well. He copped a five-game ban for describing the ref as “shameless” having “spent the whole game f***ing us”.

5) 2012/13: Real Madrid 2-0 Rayo Vallecano
There were just 42 seconds between Ramos’s two cautions – one for a foul, the other, quite harshly, for handball – both of which came before the 19-minute mark, but only after the defender had scored to put Real 2-0 up.

4) 2008/09: Barcelona 4-3 Malaga
Textbook sh*thousing from Ramos, stamping on Eliseu’s chest while trying to make it look like an accident. The ref wasn’t having it.

3) 2010/11: Barcelona 5-0 Real Madrid
Tw*tting Lionel Messi while he escaped Real’s attention again was as blatant as it was unsurprising since Barca were 5-0 by this point. Putting Carles Puyol on his back in the ensuing melee made sure of his first of five Clasico dismissals, but questions would have been asked had Ramos not got himself sent off while Real were having their pants pulled down.

2) 2016/17: Real Madrid 2-3 Barcelona
‘A red card seven days a week’, according to the exasperated commentator after Ramos missed ball and, fortunately, man with a two-footed challenge after Messi had escaped late on while Real trailed 2-1 in a Clasico which looked set to have a heavy bearing on the destination of the title. Real equalised with 10 men only for Messi to win it late on.

1) 2010/11: Ajax 0-4 Real Madrid
With the Champions League group won, Ramos set about getting himself sent off to miss the final dead rubber and wipe clean his disciplinary slate. His first booking came for throwing the ball away in the first half; his second after taking the p*ss over a goal-kick in added time while already four goals to the good. Shaking the referee’s hand on his way off just added a lovely flourish. Full marks to Rui Faria for his faux surprise as Ramos made his exit.

Ramos tried a similar trick last year, getting himself booked late on at Ajax to sit out the second leg of a last 16 tie. Not quite so clever was admitting it afterwards, which prompted UEFA to increase Ramos’s ban to two matches. Not that it mattered. Ajax went through after Real sh*t the bed at the Bernabeu.