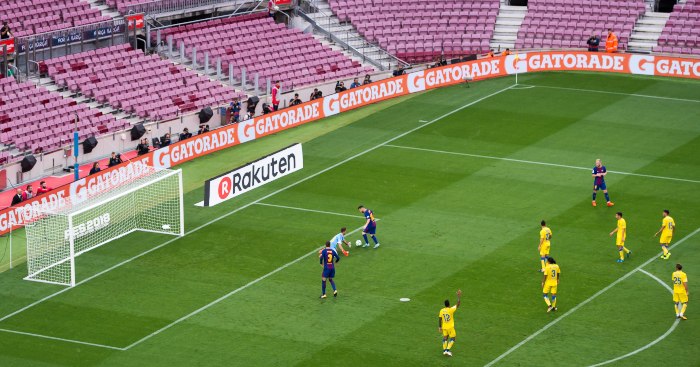 The coronavirus outbreak is threatening to put football behind closed doors across Europe. There is no precedent for such a widespread lock-out, but plenty of games have been played before without supporters. Here are seven…

Croatia 0-0 England (2018)
Fans have been banned from attending the Nations League clash as a result of a two-game sanction imposed upon Croatia after the country’s supporters went rogue and etched a swastika into the pitch ahead of the country’s Euro 2016 qualifier against Italy.

In fact, that game was also being played out to an empty stadium after Croatian supporters were punished for racist chants made in another fixture against Norway.

The goalless draw marked the first time in 998 matches a senior England team had played an international fixture behind closed doors.

West Ham 5-1 Castilla (1980)
Perhaps the most notable game to take place behind closed doors in England was a thrilling 1980 European knockout tie between West Ham and Castilla. The fixture is often referred to by fans as the ‘ghost game’ due to the haunting atmosphere.

Almost unsurprisingly for the time, when West Ham travelled to the Bernabeu for the first leg of the tie, trouble marred the fixture (which West Ham lost 2-1), with more than 50 West Ham fans ejected from the stadium due to violence.

UEFA, keen to avoid further trouble in the reverse fixture, threw the book at them – insisting West Ham’s next two home games take place away from their fans. It was arranged for the second leg to be played at Sunderland’s Roker Park – UEFA’s sanction dictated that the games must be played 187 miles away fro Upton Park – but West Ham appealed and the punishment was reduced to playing behind closed doors.

UEFA also rejected proposals for the game to be streamed live into cinemas so a mere 262 assorted staff and media saw Geoff Pike, David Cross and Paul Goddard put the London club ahead on aggregate, before Castilla’s Bernal replied with a thunderb*stard to send the game to extra time, prolonging the eerie experience.

But Cross scored twice more in extra time (including a wonderful backwards header) to dash the visitors’ hopes and settle the tie.

Behind closed doors. Not many of us there 1980 #WHUFC https://t.co/gXjpsdapmN

Barcelona 3-0 Las Palmas (2017)
Barca beat Las Palmas in October 2017 in the absence of any fans, though the hosts wanted the game to be postponed in light of the Catalonia independence referendum taking place.

The Spanish government had declared the poll illegal on a day of violent protests and unrest but the la Liga authorities insisted the match be played or Barca would face a heavy sanction, probably a points deduction. So it was decided with only 25 minutes to go before kick-off that the game would take place behind closed doors, with thousands of fans locked out.

Barca cruised to a 3-0 victory but they made their point by wearing pre-match jerseys in Catalan colours while the scoreboard displayed a picture a of a ballot box and the word ‘democracy’ throughout the game.

Leyton Orient 1-3 Colchester (2017)
A League Two fixture between Colchester and recently-relegated Leyton Orient ended in bizarre circumstances when a fans’ protest seemingly led to the game’s early abandonment. But the teams eventually returned to finish the game behind closed doors.

Acting in protest against owner Francesco Becchetti, Orient fans invaded the pitch during the 85th minute – refusing to leave for over an hour, despite the pleas of manager Omer Riza. Eventually, fans were told the game had been abandoned.

However, once they’d left, and following a lengthy postponement of close to two hours, the players snuck back onto the pitch to play out the final eight minutes in the now empty stadium, with Colchester seeing out their 3-1 lead.

Lyon 2-2 Shaktar Donetsk (2018)
One of the games Gareth Southgate reportedly asked his players to study in preparation for England’s eerie trip to Croatia was the memorable Champions League clash between Lyon and Shakthar Donetsk.

With Parc Olympique Lyonnais stadium closed to the public due to crowd trouble during Lyon’s game with CSKA Moscow in March, the lack of atmosphere seemed to have rattled the home-side, as Shakthar raced into a 2-0 lead thanks to two stunning goals from Junior Moraes.

However, in a thrilling end-to-end contest, Lyon orchestrated a brilliant comeback thanks to a Moussa Dembele header in the 70th minute and a Leo Dubois goal following minutes later.

The brilliant comeback helped maintain Lyon’s impressive start to the campaign after beating Pep Guardiola’s Manchester City 2-1 in the preceding fixture. It’s almost a shame the Lyon fans weren’t there to celebrate it.

America 1–2 Tecos UAG (2009)
There is a precedent for a virus forcing clubs to lock their gates. Fans were prevented from attending a Mexican top-flight fixture between Tecos UAG and America due to swine flu which at the time had killed 86 and infected over 1,600 people.

With the deadly virus causing disruptions across the country, this wasn’t the only game that weekend to be played without crowds. Two other first division matches games were also forced behind closed doors as a precaution.

Tecos eventually triumphed in an empty 105,000-seater Azteca Stadium, thanks to goals from Carlos Adrian Morales and Mario Ortiz, with Robert de Pinho replying for the home team.

Netherlands 4-0 Cyprus (1987)
When Netherlands and Cyprus’s Euro 88 qualifier was ordered to be replayed after the original game had been marred with violence, it seemed like the Dutch would have to cope with missing out on a resounding 8-0 victory.

Interestingly, the original game hadn’t actually been abandoned. Netherlands had seen their comprehensive victory through to the final whistle, but a home-made bomb thrown onto the pitch meant the result was declared null and void.

The game was eventually replayed two months later. Having been relocated from Rotterdam to the De Meer Stadium in Amsterdam the fixture was played out in front of a stated attendance of 300 staff and media.

Cyprus, actually made a much better fist of this second chance, only conceding the four unanswered goals this time, as John Bosman scored a hat-trick to go with a goal from current Netherlands manager Ronald Koeman.