Home F365 Features Six snakes ranked: Which is most likely to pull out of Super League… 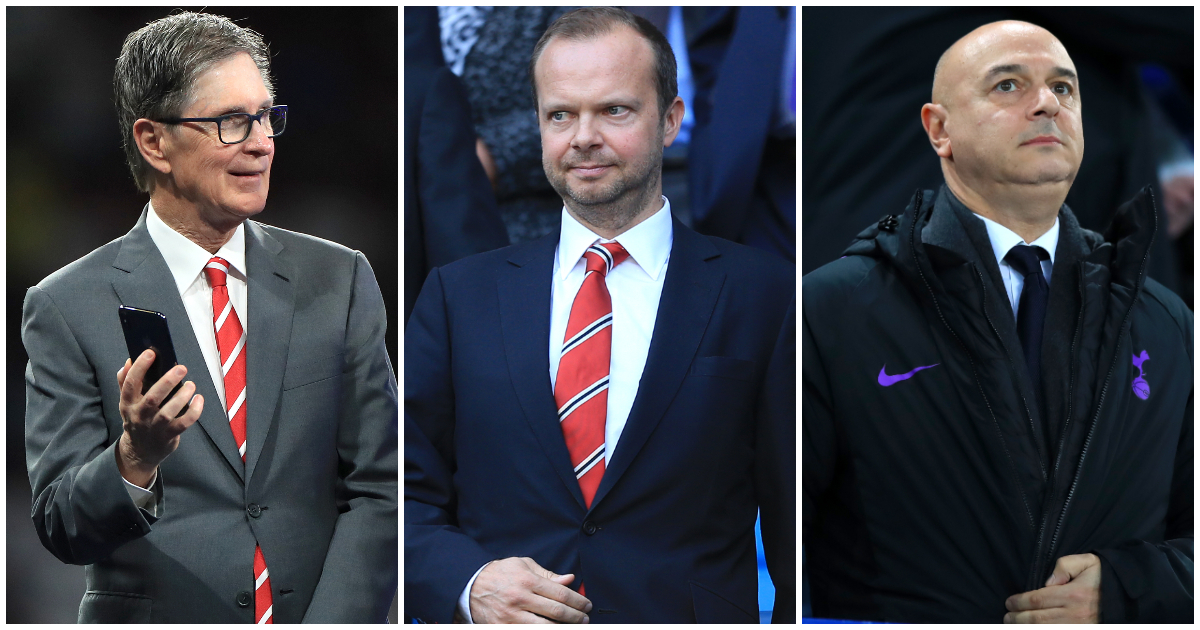 No doubt there are one or two executives having second thoughts over The Super League after the backlash the Snakey Six have received since Sunday. How likely is each club to pull out?

1) Manchester City
Of the six Premier League clubs to put their name to this sh*tshow, City appear to have the smallest appetite for it all.

Despite their previous clashes with UEFA, all was serene at City before the weekend. They were chasing a Quadruple and though a weirdly-meek FA Cup semi-final performance has put paid to those hopes, that will be forgotten if they go on to win the Premier League again and the Champions League for the first time.

The threat of immediate sanctions, however difficult they may to enforce by the Premier League and UEFA, puts City in the position with most to lose in the short-term. If their Champions League semi-final place is under genuine threat, you would think that some in the City hierarchy will begin to entertain second thoughts.

Especially if it is true that City were one of two English clubs railroaded into The Super League. When reports first emerged on Sunday lunchtime, their name wasn’t associated with the plan. One report from the Daily Mail says City were ‘backed into a corner’ last Friday and they signed up wary of the ‘threat, prospect, and fear of being left behind’. That tallies with Matt Law’s information…

I’m told Chelsea and Manchester City were informed the Super League was going ahead last week and were basically given the option of get on board or risk being left behind. They were not drivers of the plan…1/2

2) Chelsea
Chelsea appear to have been pushed into a similar position to City. Reports suggest they were left out of the loop until last week, giving them little time to fully consider the ramifications.

Like City, they have a Champions League semi-final place in jeopardy if UEFA are able to press ahead with immediate sanctions. But their hierarchy is more weathered to the type of flak currently flying from all directions.

While City’s owners are mindful of the PR and enhancing their reputation through their activities with City Football Group, Roman Abramovich gives far fewer f***s having absorbed criticism for almost two decades since he took over at Chelsea. If the feeling persists that this is in Chelsea’s best interests, as a business and a club, then he will carry on regardless. But the board certainly does not appear to have been given the same time as some of their rivals to make a fully-informed decision.

F365 Says: What do legacy fans do now? Return the contempt?

3) Tottenham
Like Abramovich, Daniel Levy gives not a single f*** for your feelings. But in their current position, with the manager-less team a mess and an enormous new stadium to fill and pay for, Spurs certainly need this more than Chelsea.

A closed shop sounds like nirvana to Levy right now, with Spurs no longer as confident of earning a place in the Champions League as they might have been for long spells of Mauricio Pochettino’s reign. With a squad rebuild looming and revenue dwindling, because of the pandemic and their own failure to earn a Champions League spot, Spurs can barely believe their luck.

4) Arsenal
Jesus. Arsenal had to lay off Gunnersaurus among around 55 other redundancies last summer. If they can’t afford the mascot’s salary, then Stan Kroenke and his cronies will feel more than anyone that they cannot afford to reject the riches on offer by the Super League.

And their chance may not come around again for some time. Of the dirty dozen, the Gunners are least deserving of their place – Schalke have a better European pedigree over the last 10 years – and though Mikel Arteta has made some progress with his infuriating squad, the Arsenal side remain some way off challenging for the fourth place for which in previous years you could bank on.

But regardless of where Arsenal stand in the Premier League table – one bad matchday away from the bottom half, as it stands – the Super League, with its resemblance to the NFL, sounds right up Kroenke’s street. So much so, it was reported that the Arsenal owner would take on the role of vice-chairman of the new ‘competition’.

5) Liverpool
FSG’s mask has slipped a few times in recent years. They have tried to portray themselves as the humble custodians of a revered football club, respectful of its tradition and history. But interspersed with all the YNWA and ‘This Means More’ bullsh*t, they have been forced into a climbdown over ticket prices; they tried to trademark the name of the city; they were complicit in the Big Picture shambles; and now this.

While they apologised for the ticket price hike and insisted they acted ‘in good faith’ over the trademark issue, they cannot plead ignorance over their Super League involvement. They saw the response to Project Big Picture, led by themselves and Manchester United. They knew what was coming, and went full steam ahead regardless, failing even to make Jurgen Klopp aware of the sh*tstorm heading his way on a matchday.

As Jamie Carragher says, if Klopp makes a stand – something he failed to do on Monday night – and his reign is threatened, then FSG will feel the full fury of the irate fans. “If Liverpool lose their manager on the back of this in the next 12 months, then the owners will be run out of that club in a week. I can assure you of that,” he said on Monday Night Football.

After a decade, FSG can’t say they didn’t know the risks and, evidently, they are more than willing to take them if it gives them the kind of security they enjoy as owners of Boston Red Sox in the cosiness of Major League Baseball.

Mediawatch: Why are we pretending Jurgen Klopp ‘came out fighting’?

6) Manchester United
The mucky paw prints of United’s board are all over this mess. If anyone is wavering – apparently they are – it won’t be the ‘scavengers’ at Old Trafford.

Joel Glazer, who rarely puts his name to anything and hasn’t communicated directly with United fans in over 15 years, is more than willing to help front the Super League. The United co-chairman was named as vice-chairman of the new organisation on the press release which club’s slipped on to their websites on Sunday night, when neither City or United had the balls to tweet from their official accounts.

In it, Glazer said: “By bringing together the world’s greatest clubs and players to play each other throughout the season, the Super League will open a new chapter for European football, ensuring world-class competition and facilities, and increased financial support for the wider football pyramid.”

The brass neck on the fella… there’s barely a word of that sentence that stands up to any scrutiny. Particularly the part about ‘world-class facilities’. Old Trafford looks quite the stadium when seen through the lens of a TV camera. In reality, the roof is leaking and the old stadium is exactly that – worn and in need of fixing up.

Even the Glazers’ underlings lack the conscience to reconsider. Ed Woodward was one of the ‘snakes’ and ‘liars’ that UEFA chief Aleksander Ceferin fingered on Monday.

Woodward, Oct 2020, asked about European Super League: “I don’t know where that story came from."

Even if they had to go it alone and play Real Madrid twice a week, for a few extra quid in the Glazers’ pockets, United absolutely would.