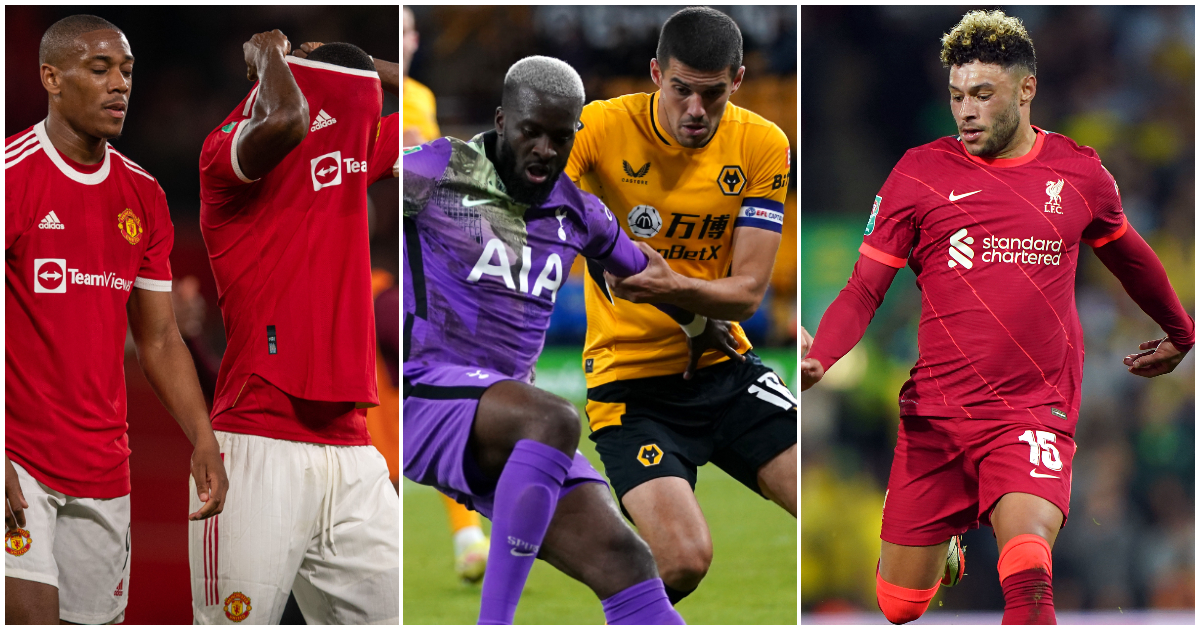 Alex Oxlade-Chamberlain, Raheem Sterling, Anthony Martial and Saul all needed to impress in the Carabao Cup. Alas, they did not. Nor did an Arsenal midfielder.

It was a different story for these ten, who seized their League Cup opportunity. But these lads fluffed it…

Anthony Martial
He’s just not arsed, is he?

What other conclusion are we supposed to draw from his body language? Martial has slipped to third-choice centre-forward and perhaps third-choice for coming off the left given Ole Gunnar Solskjaer’s weird insistence on playing Jadon Sancho down that flank. So you would think he might be motivated to prove himself in a rare opportunity against West Ham. Apparently not.

Martial has quality. We’ve seen it in bursts. But they are all too fleeting and when he is going through a slump as he is right now, sometimes it helps to ‘f***ing run around a bit’, as Harry Redknapp used to tell his strikers. Instead, Martial clings to his marker like a comfort blanket, while sulking with a face like a slapped arse.

Martial’s fans, though waning in number, will point to any number of excuses and attempt to lay the blame at Solskjaer’s feet. But two goals in 24 games tells its own story, so too does his body language.

Mailbox: Martial resolution is clear, but what do Man Utd do about Donny?

Saul Niguez
The new boy was given the opportunity to redeem himself after a nightmare debut against the same opposition, but Saul struggled once more in the Chelsea midfield.

The Spain star looked way off the pace, which is perhaps understandable for a midfielder thrown into the hustle and bustle of the English game. But Thomas Tuchel hasn’t got time to wait for Saul to get up to speed.

The 26-year-old was already the fourth choice option in Chelsea’s midfield but Ruben Loftus-Cheek’s performance in a deeper role could relegate Saul to fifth in the pecking order.

The Blues are into round four, but that was more in spite of Chilwell and Saul. The left-back’s nightmare summer appears to have prompted one long hangover, with Tuchel preferring to play Marcos Alonso at left wing-back while keeping Chilwell sat on his backside for every minute of Chelsea’s Premier League season so far.

Within minutes of his first start of the season, Chilwell was being berated by Tuchel for a sloppy pass. He allowed Matty Cash the time and space to land a cross on to Cameron Archer’s head for the equaliser before missing a penalty in the shoot-out that, mercifully for the 24-year-old, did not prove decisive.

Back to the bench he goes.

Tanguy Ndombele
It may seem harsh to include the Spurs midfielder in this list since he scored their opener on the way to a 2-0 lead which they subsequently lost. But Ndombele was a primary factor in Spurs p*ssing away that advantage.

First he lost Leander Dendoncker to allow the Wolves midfielder a free header from a corner – actually, Ndombele didn’t lose him, he just didn’t challenge – before he had his pocket picked ahead of Wolves leveller.

His contribution did nothing to change the perception many – including all his Spurs managers, it would seem – hold that Ndombele remains too insistent and unreliable to build a midfield around.

Ainsley Maitland-Niles
The Arsenal midfielder might need further clear-the-air talks with Mikel Arteta after a poor performance in his preferred position against League One opposition.

Maitland-Niles started to the right of the impressive Thomas Partey but he finished the tie with no shots, dribbles, key passes or interceptions. He won only two of his eight duels and lost possession 20 times, with three long balls all failing to find their target and one cross easily dealt with by an AFC Wimbledon defender.

Arteta must be regretting those assurances he offered Maitland-Niles over playing time. With Leeds coming to the Emirates in the next round, and the Carabao Cup higher on Arsenal’s priority list than it might normally be, the midfielder may struggle for match action between now and January.

Jonjoe Kenny
Benitez’s men really should be taking the Carabao Cup more seriously, what with their 26-year trophy drought and no European football to bother them. But any one of ten Toffees from Rafa Benitez’s XI and subs could be singled out here on a bad night for Everton at QPR.

We’ve chosen Kenny because QPR dominated Everton’s right side and there was an opening for the 24-year-old. Ben Godfrey was poor on Saturday – he wasn’t good at QPR at centre-back either – while covering for the injured Seamus Coleman at right-back and Kenny needed to demonstrate that he is capable of providing reliable cover for the skipper, especially until January when Benitez can again at least look at the transfer market for an alternative.

Kenny’s last run-out was in the previous round against Huddersfield, when even then he gave away possession 11 times.

On a night when he perhaps more than anybody else in red needed to prove his quality, Oxlade-Chamberlain had a dire first half, most of which was spent chasing his own mistakes. No team-mate lost possession more often and only one finished the game with a lower passing accuracy.

His performance picked up in the second half, which was played out for the most part with Liverpool in cruise control. He offered his first assist since last December for Takumi Minamino’s second but that is unlikely to have been enough to leave a positive impression on Klopp.

Oxlade-Chamberlain is currently out of position. He’s now a midfielder – but he’s actually supposed to be a social media manager.

Raheem Sterling
The England forward was part of the experienced half of the Manchester City side, with Pep Guardiola fielding a back four and a midfielder from the academy while supplementing the youth with some ridiculous talent in attack.

Phil Foden shone, as did Cole Palmer off the bench. But Sterling struggled to make a case for a return to Guardiola’s first-choice attack.

Sterling has started only two games in the Premier League and City won neither. Nor did they score in the defeat and draw with Spurs and Southampton respectively.

As Dave Tickner wrote, the forward has gone from being a pivotal part of City’s attack while worrying over his international prospects, to feeling snug in his England place and fretting over his club future. His performance against Wycombe gave Guardiola little reason to reassess Sterling’s current standing.

F365 Says: Sterling role-reversal begs one key question: What next?

Lyanco
Southampton earmarked the Sheffield United tie as the ideal time to expose the Brazilian defender to the rough and tumble of the English game. His performance highlighted plenty of room for improvement.

The 24-year-old was tasked with shackling Oli McBurnie but their first tussle led to yellow cards for the pair. Lyanco at least demonstrated some nous to avoid a second booking as he and the Blades striker went toe-to-toe, but that is one of few positives to pull from his debut.

The centre-back, signed in the summer from Torino, gave away possession 14 times, with one of those occasions leading to McBurnie’s second-half equaliser. At least he recognises the work ahead…

a very difficult debut, hard game. keep working… thanks to all the fans, it was wonderful to wear this shirt! I will always give my life for this team. we are classified!!! @SouthamptonFC 🦍🙌🏼💙💛 pic.twitter.com/R5sBn2BCK4

Dan Gosling
“I think today is incredible,” said Xisco Munoz after seeing Watford waste a host of chances before Stoke punished them at Vicarage Road. The Hornets boss was clearly not too downhearted by the defeat but their exit certainly limits the prospects of the likes of Gosling and Ashley Fletcher.

Gosling was starting for the first time this season, with his only other appearance coming in the late stages on the Premier League’s opening day when Villa were threatening to come back from the dead.

The former Everton midfielder had three chances but failed to take any while the remainder of the game seemed to pass him by before he was hooked by Munoz in the final 20 minutes.