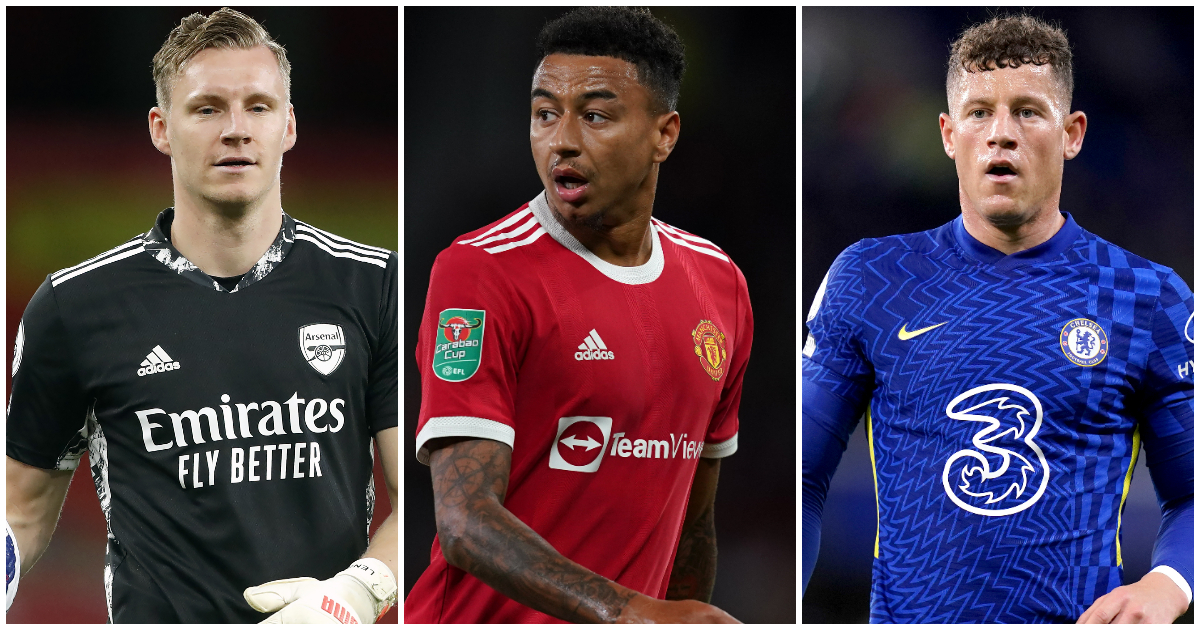 The January transfer window allowed many Premier League players a fresh start. Not these lads. Here are 10 stars stranded after the deadline passed…

10) Trezeguet
The winger is stuck at Villa Park – for now.

Mercifully for Trezeguet, the Turkish transfer window is open for another week yet, in which time he could secure a loan move to Istanbul Basaksehir. And he certainly needs one.

Under Steven Gerrard, the Egyptian has played only 10 minutes in the Premier League. “He could find getting game time here challenging,” Gerrard said of Trezeguet in the wake of signing Philippe Coutinho. “So we’ll be respectful and see what lands between now and the end of the season.”

Once he’s wrapped up at AFCON, Trezeguet needs to get the deal done sharpish to get back to Turkey. There’s bugger all for him in Brum.

9) Dwight Gayle
We’re starting to think that Gayle doesn’t mind being stuck at Newcastle as it would appear that he simply cannot be moved.

With Chris Wood’s arrival and Eddie Howe looking for other forwards, his prospects of game time at St James’ Park appear more limited than ever before. Under Eddie Howe, he’s played only seven minutes.

You might understand Gayle’s willingness to kick his heels on Tyneside while he picks up big money, an arrangement Newcastle have locked in until 2024. But that would still be the case if he went on loan to the Championship, where there was plenty of interest. Instead, Gayle will watch a relegation dog fight from the sidelines, as will Ciaran Clark and Jamal Lewis after they snubbed deadline day loan moves.

8) Danny Rose
January seemed to come at the perfect time for Rose, who was bombed by Claudio Ranieri and told he was free to arrange a move. But Ranieri found the exit first, leaving Rose with an opportunity to catch Roy Hodgson’s eye.

The problem with Rose is that nobody can be sure whether he gives a f***. Ranieri suggested the former England defender was suffering from a lack of fitness rather than confidence, which hints at an absence of motivation more than anything else.

Jose Mourinho would doubtless agree with that assertion, and Rose will have a hard time convincing a Premier League manager to take a punt on him, leaving him to pick up his money at Watford for another 18 months. Which may well suit Rose just fine.

7) Ross Barkley
It got to mid-afternoon on deadline day before we noted the strange absence of Barkley’s name among the speculation. The former England midfielder looked perfectly ripe for a loan move.

Everton, Leeds, West Ham and Newcastle had all been linked with Barkley over the course of January, but no one made a decisive move. At least we assume not as it seems hard to fathom why Chelsea might stop him from leaving.

We could understand it if Barkley had seized his opportunity before Christmas when Thomas Tuchel gave him minutes in four out of five games, including a start against Burnley. But one 25-minute cameo in 13 Premier League games since suggests the Blues boss isn’t especially minded to offer the 28-year-old many more chances.

6) Nampalys Mendy
The Leicester midfielder hasn’t started a club match this season. And when he does see action, his national team duty has borked his chances of getting a move that might lead to a regular game.

Mendy couldn’t secure a move in the summer, after which Brendan Rodgers omitted him from the Foxes’ Premier League squad. “I would really love to leave Leicester, it is normal and logical,” said Mendy in November.

But his AFCON commitments with Senegal haven’t helped the 29-year-old get fixed. Mendy might be wise to look towards Turkey, Austria or any other leagues where the window remains open.

5) Nicolas Pepe
Despite the exodus around Pepe, Arsenal were still said to be willing to let their record signing leave on the same day the previous holder of the title was allowed to exit for nothing.

Pepe has struggled for game time of late, with Bukayo Saka and Gabriel Martinelli nailing down the wide positions. Indeed, the Ivorian has played only 12 minutes in the Premier League since his last start in mid-October, 14 games ago.

There was said to be interest from Spain, Germany and France, but no move materialised in the end. Perhaps with a thin squad, Arteta may be forced to use Pepe at points through the remainder of the season, maybe in a central role (in defence?), but the 26-year-old can be in little doubt over his standing in the manager’s mind.

4) Harry Winks
Leeds’ priority in the winter window was a central midfielder. But even when offered Winks on deadline day, they declined and took the view that not signing one at all was a savvier move.

Which leaves Winks somewhat stranded at Tottenham, especially in the wake of Rodrigo Bentancur’s arrival. Winks, presumably, is down to fourth choice in the battle for two central midfield spots, behind Bentancur, Pierre-Emile Hojbjerg and Oliver Skipp.

The outlook is slightly brighter for Winks than other players on this list – prior to his January business, Conte used the 25-year-old in five of Spurs’ last six matches. But being hawked around the Premier League as a potential loanee late in the window must be disheartening for the ex-England midfielder.

3)Dean Henderson
This isn’t how it was supposed to go for Henderson. A year ago, the path was relatively clear: finish the season as Manchester United’s first choice; go the Euros with genuine ambition of playing in England’s goal; return to Old Trafford as undisputed No.1.

Instead, he failed to convince Ole Gunnar Solskjaer, who opted for David De Gea when he was backed into a corner for the Europa League final; was injured while serving as Jordan Pickford’s back-up in the summer; contracted Covid; watched De Gea rediscover his mojo.

A loan move was the obvious solution for Henderson – and United too, all the while Tom Heaton is around to occupy the bench. But the Red Devils blocked a late move from Watford, while also rebuffing interest from Ajax and Newcastle. Instead, Henderson will almost certainly lose another season as his stagnation continues.

2) Bernd Leno
The writing was on the wall for Leno as soon as Aaron Ramsdale arrived in the summer. Many people scoffed – including us – at Arsenal’s plan and their willingness to cough up for England’s fifth-choice keeper. But it turned out to be an inspired move.

The fact Arsenal were so intent on signing a new stopper should have told Leno all he needed to know about his prospects under Mikel Arteta. If he hadn’t taken the hint, then Ramsdale’s form soon made the picture even clearer for the German.

The Gunners then went after another keeper in the shape of Matt Turner from New England Revolution, though the lack of confirmation of a move for the American may be why Leno remains at the Emirates. And he’ll stay there, sat on the bench without even a cup game to look forward to. All the while his Germany prospects wither ahead of the World Cup. Had that been in the summer, you have to think Leno would have pushed harder for an Arsenal exit.

1) Jesse Lingard
Manchester United have been really weird over Lingard’s situation. There was a report last week that the board were ‘petrified’ of the attacker making them look daft again if he were to go out and smash another loan period. Instead, they have made themselves look pretty ridiculous, all the while keeping Lingard cooped up.

A club with some semblance of nous would have sold Lingard last summer. His stock was higher than anyone might have expected after half a season at West Ham, but instead of raking in some cash for a player who wasn’t starting in the Premier League and a year from free agency, they got greedy. And lumbered themselves with his £100,000-a-week wages when there was no need.

And they’ve done the same again. Holding Newcastle to ransom was fair enough given the Magpies’ wealth and desperation. But even Ralf Rangnick sanctioned his move on Monday morning, and Newcastle were even more willing to pay. Mason Greenwood’s absence may be a factor, but one would think that would be Rangnick’s decision rather than that of the board.

At least there is light at the end of the tunnel for Lingard. In six months he can pick his own club and be done with this sh*t.