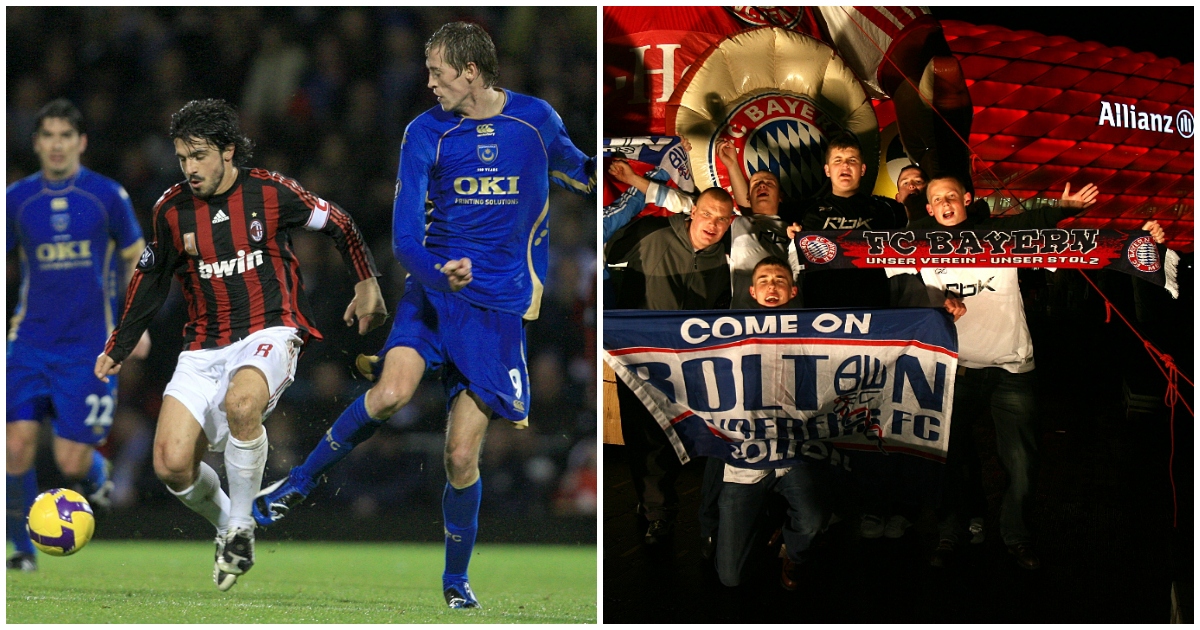 Remembering when the Fair Play League was Man City’s only avenue to Europe, Bolton beating Atletico, and when Ronaldinho rocked up at Fratton Park…

Brighton could break through their glass ceiling by qualifying for Europe. But the Seagulls should know that achievement is no guarantee of stability. Here are ten other clubs this century who ventured on unlikely forays onto the continent…

Competition: UEFA Cup
How they qualified: Finished fifth in the Premier League
How they fared: George Burley’s Tractor Boys went from the Championship to Europe in rapid time, sealing promotion to the Premier League via the play-offs in 2000 before then finishing fifth in their first season back in the top flight. It earned Town a crack at the UEFA Cup, a competition they had won 20 years before.

Ipswich squeezed through the first round by edging Torpedo Moscow 3-2 on aggregate. Helsingborg dominated the first leg of their second-round meeting with Town but couldn’t score, allowing Burley’s side to eventually progress with a 3-1 aggregate win, despite trailing at half-time in the second leg. The draw then paired Ipswich with Inter Milan, who were beaten 1-0 at Portman Road thanks to Alun Armstrong. But the world’s most expensive striker Christian Vieri took charge of the second leg, scoring a hat-trick at the San Siro to condemn Town to a 4-2 aggregate defeat.

Town were actually back in Europe the following season, despite being relegated, qualifying for the UEFA Cup again via the Fair Play League. They battered Luxembourg’s Avenir Beggen 9-1 on aggregate in the preliminary round, before sneaking past Yugoslavian outfit FK Sartid 2-1 on aggregate. Joe Royle replaced Burley in time for the second round, which is far as Town got after losing on penalties to Czech side Slovan Liberec.

Competition: UEFA Cup
How they qualified: Fair Play League
How they fared: Kevin Keegan’s City had finished ninth in the Premier League but having been good boys, they were given a place in Europe for the first time in 24 years. They nipped down the road to Cardiff to play Total Network Solutions in the preliminary round, triumphing 5-0 at home in the first competitive match at the City of Manchester Stadium before completing a 7-0 aggregate win at the Millennium Stadium.

Lokeren were beaten 3-2 in Manchester and 1-0 in Belgium before City came unstuck on away goals against Groclin Dyskobolia after 1-1 and 0-0 draws. While City were taken over and began chasing the Champions League, their Polish vanquishers were dissolved in 2015.

Competition:  UEFA Cup
How they qualified: Losing the FA Cup final
How they fared: Anglo-Italian Cup aside, Millwall’s only European foray came after reaching the FA Cup final in 2004, when they were beaten 3-0 by Champions League qualifiers Manchester United.

Dennis Wise scored the Lions’ first goal in Europe in a 1-1 draw with Ferencvaros at the New Den. Millwall took 3,000 to Hungary for the second leg which, to the shock of precisely no one, was marred with violence. On the pitch, Ferencvaros beat the Championship side 3-1, while off the pitch, two Millwall fans were stabbed, while their hosts were charged by UEFA over violence and racist abuse.

Competition: UEFA Cup
How they qualified: Finished sixth in the Premier League
How they fared: Their highest Premier League finish, two seasons after they were almost relegated, brought European football to Bolton for the first time. And the Trotters appeared determined to make the most of it.

They reached the group stage by beating Lokomotiv Plovdiv 2-1 home and away before finishing third with three draws against Sevilla, Besiktas and Vitoria Guimaraes and a win over Zenit. Big Sam took the Trotters to Marseille for the round of 32 second leg after a goalless draw at The Reebok, but their adventure was brought to an end in the south of France after a 2-1 defeat.

Ah well. Bolton were back two years later, and they went a step further under Gary Megson. Three draws again in the group stage with Bayern Munich, Braga and Aris together with a win over Red Star Belgrade earned Wanderers a crack at Atletico Madrid. El-Hadji Diouf gave Bolton a first-leg lead in Lancashire where Sergio Aguero was sent off for spitting at the referee. Then Megson’s men kept Atletico at arm’s length in Madrid to secure a goalless draw to reach the last 16.

There they faced Sporting Lisbon, who took a 1-1 draw back to Portugal after the first leg. Bolton couldn’t muster the goal they needed, instead falling to a 1-0 defeat. Sporting, though, were dumped out by Rangers at the next stage on their route to the final in Manchester.

Competition: UEFA Cup
How they qualified: Winning the FA Cup
How they fared: Portsmouth’s first and only European campaign brought Ronaldinho, Kaka, Shevchenko and Inzaghi to Fratton Park, and Pompey should have beaten AC Milan having led 2-0 with 84 minutes gone. But Ronaldinho and Inzaghi struck late to deny Tony Adams’ side a famous victory.

It took until their last group game to secure a first European win, with Heerenveen thumped 3-0. But defeats to Braga and Wolfsburg left Pompey in fourth place and out of the competition.

They should have been back two years later having reached the FA Cup final once more against a Chelsea side already in the Champions League. But Pompey’s financial meltdown meant they were deprived of another jaunt into Europe.

Competition: Europa League
How they qualified: Winning the League Cup
How they fared: Brum were the first English club to play in a European competition when they entered the Inter-Cities Fairs Cup – a tournament ingeniously set up to promote industrial trade fairs, one in which they reached the final in 1960 and 1961.

Half a century later, Blues were back in Europe after beating Arsenal in the League Cup final but they competed as a Championship club after being relegated. A play-off round win over Nacional put them in the group stage, where they met Braga, Maribor and Club Brugge.

Chris Hughton’s side lost only two games out of eight and finished on 10 points but missed out on progression after finishing a point behind both Brugge and Braga.

Competition: Europa League
How they qualified: Reaching the FA Cup final
How they fared: Stoke’s consolation for losing the 2011 FA Cup final to Champions League qualifiers Manchester City was a place in Europe for the first time in 36 years. Unless you count the Anglo-Italian Cup. Which we don’t…

To reach the group stage, the Potters had to go through a couple of qualifying rounds which saw them beat Hadjuk Split and FC Thun. Those victories saw Tony Pulis’s side face Dynamo Kiev, Besiktas and Maccabi Tel Aviv home and away. Stoke won three of their six games to qualify comfortably for the last 32 where they met Valencia.

Could Valencia do it on a cold Thursday in Stoke? Yeah. Ten years ago today, Mehmet Topal’s stunner gave Los Che a first-leg lead, one they doubled by winning by the same margin at the Mestalla.

Competition: Europa League
How they qualified: Won the FA Cup
How they fared: Wigan’s first ever major trophy took them into Europe for the first time though, like Birmingham two years previously, they went into the Europa League as a Championship side after being relegated under Roberto Martinez.

Owen Coyle grabbed the reins but it wasn’t a successful jaunt to the continent. The Latics failed to qualify from a group featuring Rubin Kazan, Maribor and Zulte Waregem, despite going unbeaten through the first half of their six-match campaign. Single-goal defeats at home to Zulte Waregem and in Kazan and Maribor saw them finish bottom of the table.

Competition: Europa League
How they qualified: Winning the League Cup
How they fared: Swansea went one stage further than Wigan in their first European campaign since the Cup Winners’ Cup in 1991-92.

Under Michael Laudrup, they beat Malmo 4-0 home and away in the third qualifying round before sinking Petrolul Ploiesti 6-3 on aggregate to reach the group stage. Which began with one of the most famous victories in their history…

The Swans stuck three past Valencia at the Mestalla before sinking St Gallen. Both sides had their revenge with 1-0 wins in the return games after a pair of 1-1 draws with Krasnodar but Swansea, by now managed by Garry Monk, had done enough to reach the last 32.

There they met Napoli, who were too strong for Swans after a 0-0 draw at the Liberty Stadium. In Italy, goals from Lorenzo Insigne, Gonzalo Higuain and Gokhan Inler denied the Welshman, who looked to be going through on away goals until Napoli scored twice in the last 12 minutes.

Competition: Europa League
How they qualified: Reaching the FA Cup final
How they fared: Not well…

Hull squeezed past Slovakian Super League runners-up AS Trenchin in the third qualifying round despite Tom Huddlestone missing a penalty in a goalless first leg away from home and falling behind after 91 seconds at the KC.

But Steve Bruce faced criticism for fielding a weakened team in the play-off round first leg against Lokeren. They lost 1-0 in Belgium and couldn’t turn it around back in Humberside, with the Tigers exiting on away goals.