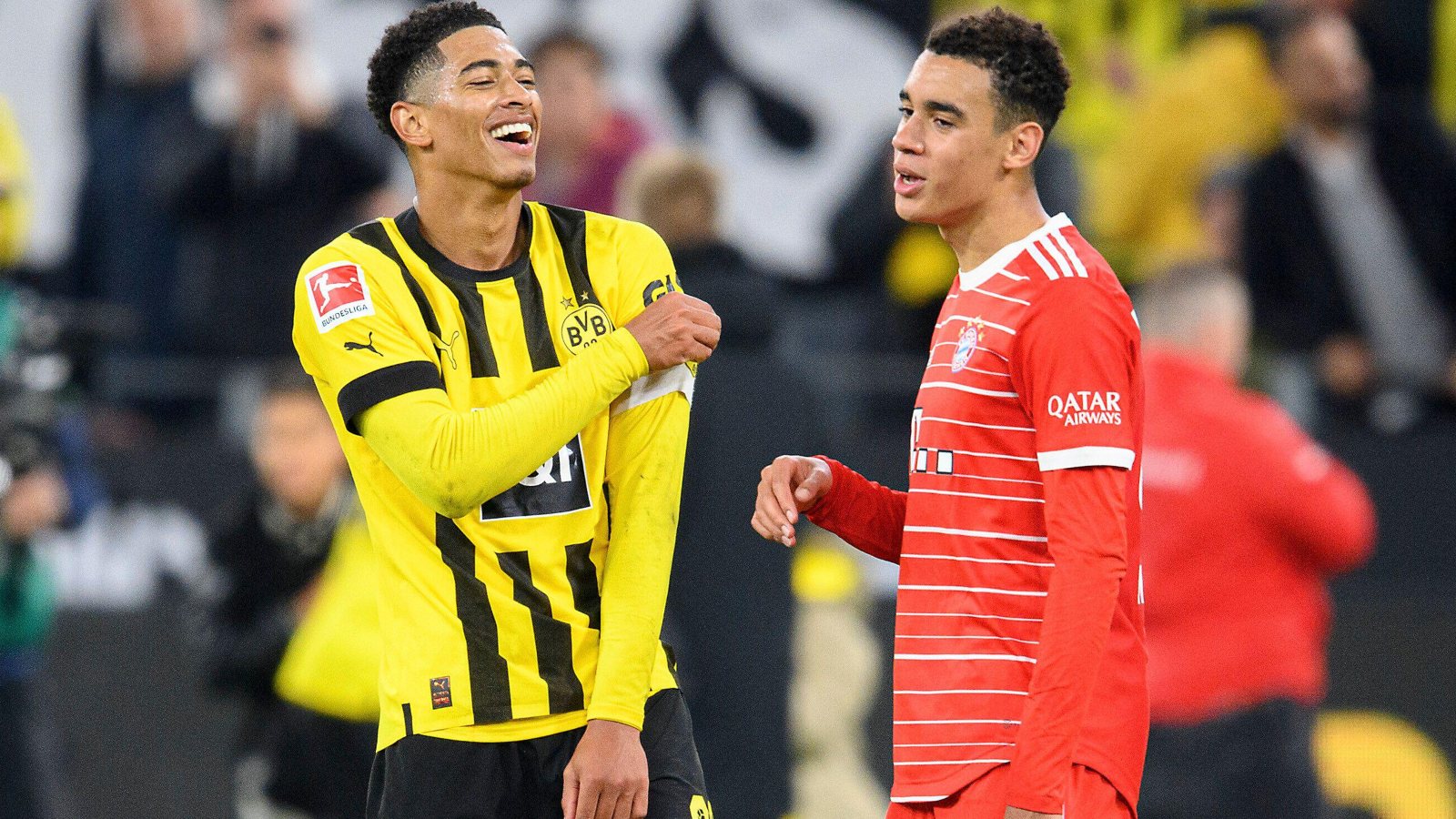 Jude Bellingham, unsurprisingly, tops the list, though he’ll fetch a lot more than that next summer. Premier League representation comes from Liverpool and Southampton…

Here are the 10 most valuable teenagers in world football, according to Transfermarkt.

1) Jude Bellingham (Borussia Dortmund)
Age: 19
Transfermarkt have Bellingham’s value pitched at €100million but if you turned up at Borussia Dortmund with 86million pound coins, they wouldn’t even answer the door. Especially after his World Cup heroics. Regardless of how the tournament pans out and how far England go with Bellingham in their engine room, the midfielder has enabled Dortmund to add another 20 or 30million to whatever figure they had in mind. Birmingham were laughed at when they retired his jersey number; now people are asking what took them so long. Where next?

2) Jamal Musiala (Bayern Munich)
Age: 19
Germany’s group stage exit came in spite of Musiala’s best efforts, with the Bayern attacker one of very few bright spots in another dark time for Die Mannschaft. Especially against Costa Rica, it was the teenager leading the charge, while more experienced team-mates left him to it. Just imagine if the former Chelsea academy graduate had chosen England over the country of his birth… *vigorously rubs thighs*

3) Gavi (Barcelona)
Age: 18
Pablo Martín Paez Gavira is the reigning Golden Boy and Kopa Trophy holder. The buy-out clause in his Barca contract is said to be worth €1billion. But, by all accounts, the lad still can’t tie his shoelaces.

🗣 | @marcmarba: "Gavi has been playing with his laces untied since he was very young, it’s because he doesn’t know how to tie them well. He doesn’t care and he plays like that." pic.twitter.com/VSd9itc0bE

4) Florian Wirtz (Bayer Leverkusen)
Age: 19
Germany might be sulking now but they have a bright future to look towards, with Musiala and Wirtz front and centre. Wirtz would have been in Qatar but the Leverkusen star could not recover in time from a cruciate ligament injury suffered back in March. “I don’t need to mention that we would have loved to have such a good young player in the squad,” said Hansi Flick upon unveiling his squad. “But he had a serious injury and is just back in team training. The most important thing for him now is to get fit again and he’ll certainly be an option in the future.”

5) Harvey Elliott (Liverpool)
Age: 19
Elliott has recovered from his serious injury and has looked as good as new in Liverpool’s midfield this season. “It has made me a better and stronger person,” said the former Fulham youngster on his broken ankle, suffered at Leeds last September. “It was probably the best time to go through it, being young and able to get through as quickly as I did.” This season, for the club he supported as a wee nipper, Elliott has featured in every Premier League and Champions League match Liverpool have played, along with Alisson, Virgil van Dijk, Fabinho and Mo Salah. Not bad company to keep.

6) Youssoufa Moukoko (Borussia Dortmund)
Age: 18
Moukoko is valued at €30million by Transfermarkt but he could be going for free at the end of the season, unless he can be persuaded to sign a contract renewal with Dortmund. Reports suggest the likes of Liverpool and Manchester United could meet that valuation next month to swerve a clamour for the forward next summer.

READ MORE: The 20 best footballers available on free transfers in 2023 including Messi and Rashford

7) Roméo Lavia (Southampton)
Age: 18
Thomas Tuchel was so blown away by Lavia’s performance in Southampton’s win over Chelsea at the start of the season that he immediately bid £50million for the midfielder. Lavia only joined Saints from Manchester City last summer, having made two senior appearances for the Premier League champions. City covered their backs by inserting both a buy-back option – believed to be worth around £40million – and a sell-on clause. Regardless, wherever his next stop after St Mary’s, Saints stand to make a big profit. And a swift one, if they so choose.

8) Endrick (Palmeiras)
Age: 16
So good is the 16-year-old Brazilian, Real Madrid have apparently promised not to sign Erling Haaland if he chooses the Bernabeu when his big move to Europe happens. PSG are also sniffing around the forward who made his senior debut for Palmeiras in October. Since then, he’s scored three goals in seven appearances, after 165 in 169 games for Palmeiras’ youth team.

9) Mathys Tel (Bayern Munich)
Age: 17
The forward is worth around €20million, according to Transfermarkt, but Bayern won’t be worried about paying over the odds having spent €28.5million on the France youth international in July. Tel arrived from Rennes, where he broke Eduardo Camavinga’s record as the youngest player to represent the French side aged 16 years and 110 days. Tel has already got his feet under the table at the Allianz Arena, having scored three goals in seven Bundesliga appearances for Bayern.

10) Benjamin Sesko (RB Salzburg)
Age: 19
There was plenty of clamour around Sesko in the summer, when Manchester United were sweet on the Slovenia striker. Reports suggest they remain keen to land the 6’5″ centre-forward but, as always, Leipzig have first refusal on anything out of Salzburg and, unless a madness happens in the meantime, Sesko will switch Red Bull-owned employers next summer. The striker has scored 10 league goals for Salzburg in 41 appearances, 21 as a substitute.

Read more: Which club will sign Jude Bellingham? The whys and why nots for Liverpool, Man Utd, Real and others…