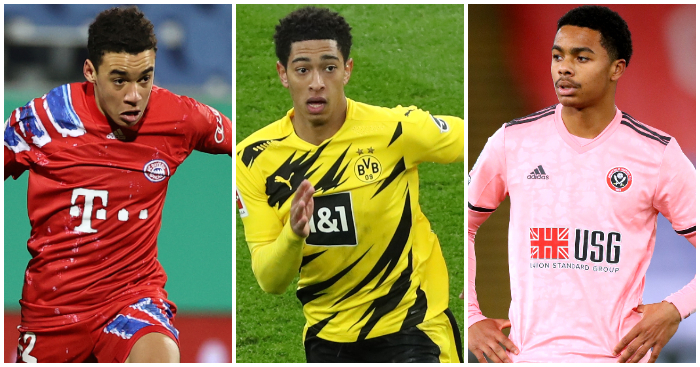 1) Youssoufa Moukoko (Borussia Dortmund)
16 years, 1 day
Having watched Moukoko score 141 goals in 88 youth matches, Dortmund lobbied the Bundesliga to lower the minimum age for players from 17 to 16. Once they were successful, the club wasted no time in giving the striker his senior debut just a day after his 16th birthday in the win over Hertha Berlin. He became the league’s youngest ever scorer when he notched aged 16 years and 28 days in a defeat at Union Berlin, 10 days after he became the Champions League’s youngest ever player. Dortmund resisted the temptation to recruit a back-up for Erling Haaland in the knowledge that Moukoko was coming through, and the Norway star is a fan of his young team-mate. “Moukoko is much better than I was at his age,” Haaland said last year. “I have never seen such a good 15-year-old in my life.”

2) Mohamed-Ali Cho (Angers)
16 years, 7 months, 11 days
Cho made his senior debut in Angers’ 2-0 defeat to Bordeaux at the end of August, since when the England Under-16 international has made eight further substitute appearances. The forward, who turns 17 next week, was born in France but moved to London shortly after. He spent time at West Ham’s academy and was on PSG’s books when he moved briefly back to France. Everton took him at age 11 but he chose to leave Goodison in 2019 because, according to his family, “the project they were proposing not what we were looking for”. Cho took his time to select his next destination before becoming the youngest player ever to sign a professional deal in France last May.

3) Antwoine Hackford (Sheffield United)
16 years, 9 months, 13 days
Hackford emerged from the bench for the final 10 minutes of the Blades’ 2-0 defeat at Crystal Palace a fortnight ago, completing a rise through the ranks at Bramall Lane. The striker featured in United’s Under-18s aged 14 and the Sheffield-born youngster was only 15 when he was selected for the Under-23s. Hackford has been capped by England at Under-15 and Under-16 level.

Antwoine Hackford is the third-youngest player to make a Premier League appearance.

4) Rayan Cherki – Lyon
17 years, 11 days
The attacking midfielder made his debut as a 16-year-old, catching the eyes of Real Madrid and Manchester United in 11 senior appearances last season including a cameo in the Champions League semi-final when he became the youngest player to feature in the knockout rounds two days after his 17th birthday. Cherki, who says he was discovered while playing in a car park, has played 14 further first-team games this term after signing professional terms with Les Gones.

17 – Aged 17 years and 111 days, Lyon's Rayan Cherki is the youngest player ever to receive a red card in Ligue 1. Locker. pic.twitter.com/o1owZmjBBN

Five academy graduates that would benefit from a January move

5) Lucas Gourna-Douath (Saint-Étienne)
17 years, 1 month, 07 days
Eduardo Camavinga, now aged 18, is already the old ‘new Pogba’. The new ‘new Pogba’, according to AS, is Gourna-Douath, who reportedly caught the eye of Mauricio Pochettino in the coach’s first game in charge of PSG. The 17-year-old, though, is more of a defensive screener. He has made 15 appearances this term after his debut in the win over Strasbourg in September.

6) John Joe Patrick Finn (Getafe)
17 years 1 month 11 days
The forward became Getafe’s youngest debutant when he came off the bench in a 3-0 defeat at Levante last month. He has since made five La Liga appearances off the bench as well as a couple of Copa del Rey starts. Patrick, who had trials with Real aged nine, was born in Madrid to an Irish father from Mayo and a French-Cameroonian mother. He’s not the only player with Irish connections on Getafe’s books: Clare-born defender Ryan Nolan, 21, moved to Spain after leaving Inter Milan.

🇮🇪 Dad is from County Mayo, Ireland
🇨🇲 Mother is from Cameroon
🇪🇸 Is also eligible to play for Spain, having lived there his entire life. https://t.co/wCBaeXyRYu

7) Jude Bellingham (Borussia Dortmund)
17 years, 2 months, 21 days
The England international has made five further starts after marking his Dortmund debut in September with an assist against Borussia Monchengladbach. Chelsea already want to bring him back to England.

Plays against Bayern in Der Klassiker on Saturday…

A big week in the increasingly remarkable life of 17-year-old Jude Bellingham 🤯 pic.twitter.com/1x2rzFAS2A

8) Florian Wirtz (Bayer Leverkusen)
17 years, 4 months, 17 days
Wirtz, an attacking midfielder, became Leverkusen’s youngest ever player and, at the time, the Bundesliga’s third-youngest player when he made his debut upon the league’s restart after the Covid break. He had been with Leverkusen only since last January when he joined from Cologne. Already, Wirtz  has signed a new contract while scoring twice and laying on five assists in 13 Bundesliga appearances.

9) Miguel Rodriguez (Celta Vigo)
17 years, 5 months, 5 days
The Spain Under-17 international, a left-sided right winger, came off the bench for his senior bow in a 2-0 defeat to Osasuna. Rodriguez has made three substitute appearances since, though he has remained on the bench during Getafe’s impressive recent run which was ended by Real Madrid last weekend.

10) Jamal Musiala (Bayern Munich)
17 years, 8 months, 26 days
The England Under-21 midfielder made his senior debut with a brief cameo appearance against Freiburg last season when he became the youngest player to appear for Bayern in the Bundesliga. This term he has netted three goals in 11 Bundesliga appearances, becoming Bayern youngest ever scorer on the opening day of the campaign. Stuttgart-born Musiala moved to England aged seven before joining Chelsea’s academy. He swapped the Bridge for Bavaria in summer 2019.

What a month English teenager Jamal Musiala is having!

🗓️ December 5: A great finish for Bayern Munich in a big game at the top of the Bundesliga