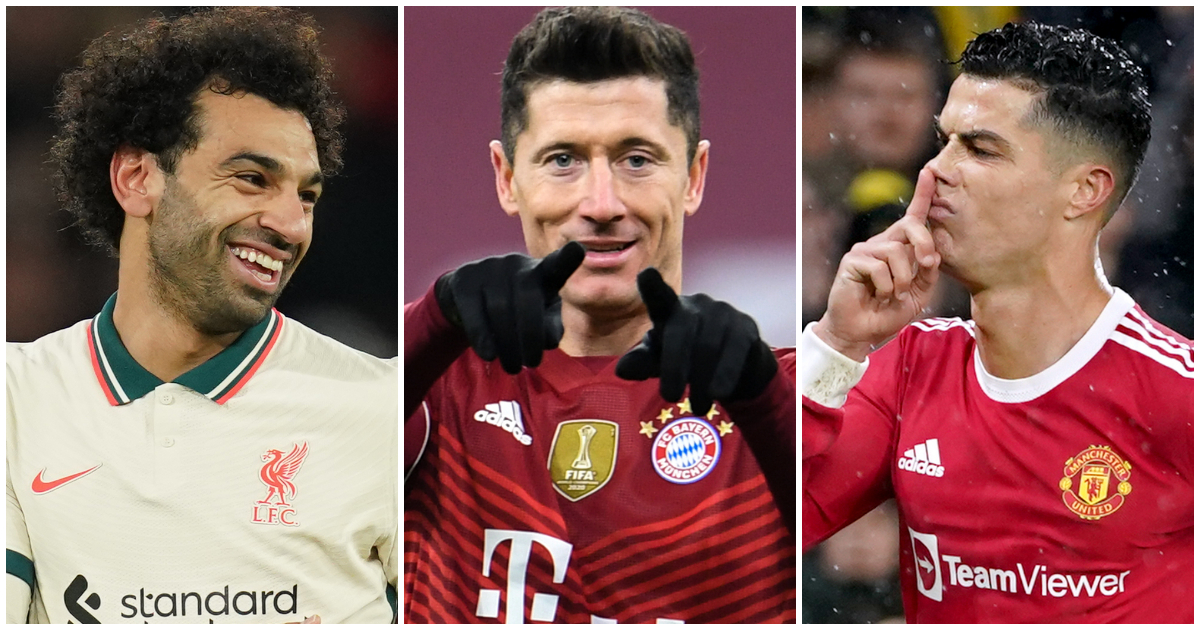 With most of Europe on winter breaks, Cristiano Ronaldo and Mo Salah can climb in the 2021 top scorer list. But no one is catching Robert Lewandowski.

Here are the top scorers in the calendar year, including league, cup and European goals…

The 31-year-old wrapped up his year by scoring the opener for Monaco in a win over Rennes – his 101st game and 55th goal for the club.

Moreno ended the year on a high with braces in consecutive games to give Villarreal three straight wins, with the Yellow Submarine netting 20 goals in their last five games of 2021.

Ronaldo bagged 20 goals for Juventus in the second half of last season before adding 13 more for United this season. He has two games against bottom-three dwellers to get ahead of this fella…

All but six of Messi’s 34 goals came during his Barca swansong. In Ligue 1, he has scored only once in 11 appearances since moving to Paris.

Vlahovic, set to be one of the hottest properties of 2022, concluded 2021 by equalling Ronaldo’s record of 33 Serie A goals in a calendar year, but the Fiorentina striker missed the chance to set a new benchmark by failing to net in a 1-1 draw with Verona on Wednesday night.

The Liverpool star is certainly making the most of the chances he’s had, outperforming his non-penalty xG so far this season by 3.7 goals. Against Leicester’s porous defence, Salah will most likely climb into the top four ahead of this guy…

Benzema nudged ahead of Salah with both goals in Real’s 2-1 win over Athletic Bilbao that took them eight points clear at the top of La Liga at the turn of the year.

If this season is Mbappe’s PSG farewell tour, he’s going out with a bang. Despite all the firepower in Mauricio Pochettino’s squad, the France star, just turned 23, has scored more than twice as many as Messi, Neymar or any other teammate.

Next year will be all about Haaland while Europe’s big-hitters queue up for the chance to butter up Mino Raiola. Manchester United are joined by City and Real Madrid at the front of the line…

Another utterly ridiculous year from Bobby L – but he’s still some way from the record haul for a calendar year. Messi bagged an astonishing 79 goals for Barca in 60 appearances for Barca in 2012.