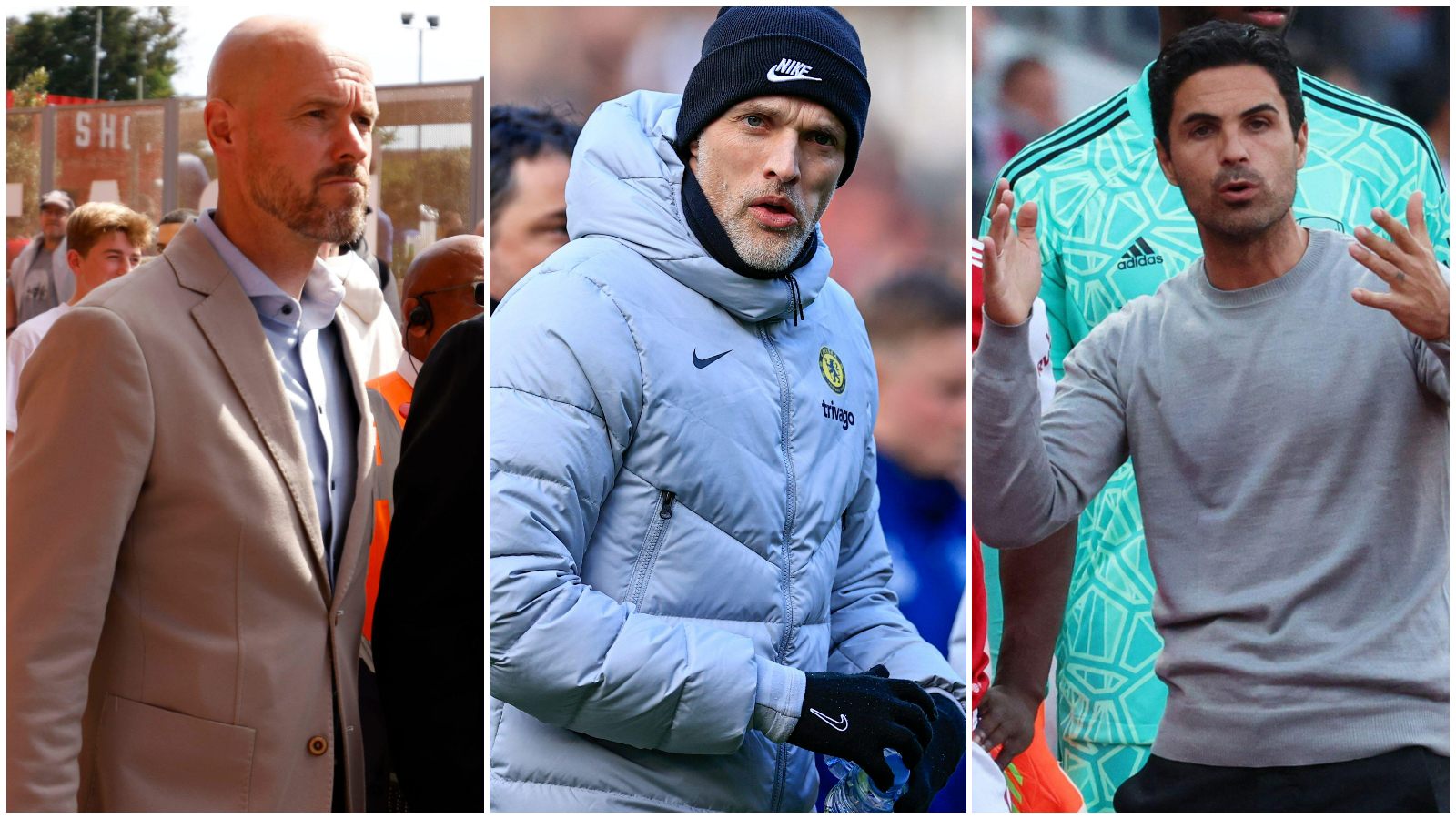 Some Premier League clubs are motoring through their recruitment while others move at glacial speed. Here are the top 10 areas still in need of attention…

10) Manchester City: left-back
City were English football’s best team last season and they’ve added one of the world’s best centre-forwards and an England midfielder. The rest of the Premier League is already screwed.

But Pep Guardiola is nothing if not a perfectionist and the City boss rarely misses a chance to splurge on a full-back, especially when he has just cause. At left-back, his options are extremely thin, with only Oleksandr Zinchenko a specialist (ish) and the Ukrainian could well move this summer for first-team football, perhaps even in his originally preferred position of central midfield.

City have been linked with a few left-backs, most heavily with Brighton’s Marc Cucurella. Which is a move we’d absolutely love to see, even if it puts City even further out of reach.

9) Leicester: centre-back
We’re getting to the stage where Leicester just need someone, anyone through the door to kickstart a summer which Brendan Rodgers hoped would see the Foxes rediscover their ‘hunger’ after a hugely disappointing season.

They could do that in a few areas. Rodgers needs some spark in his midfield, especially if Arsenal or anyone else comes for Youri Tielemans, and there is still a void on the right of their attack. But the centre of Rodgers defence seems most ripe for improvement.

One of Leicester’s biggest and most obvious weaknesses last season was their woeful inability to defend set-pieces. Rodgers put that down to individual lapses rather than a tactical flaw – as you might expect – but there wasn’t a centre-back he could rely on for form and fitness.

Perhaps they are waiting to sell Tielemans so they can fund their recruitment, but it is all too quiet at Leicester right now.

When Bullsh*t Brendan emerges, you know Rodgers is worried about Leicester

8) Wolves: centre-forward
It is a conflicting time to be a Wolves fan. After a rotten run-in sent the Molineux men into the summer in a sulk, it was thought that Bruno Lage needed signings to lift the mood.

Joao Moutinho’s scribble on another one-year deal will have helped and it looks increasingly likely that Ruben Neves will stay for at least another year, but retaining the midfield pair only leaves Wolves where they were. Which is no bad place – the lowest they’ve finished in four years back in the top flight is 13th and last term they were back in the top half – but Wolves fans are entitled to ask for more than simply standing still.

Neves and Moutinho staying allows Lage to look at other other central areas, in defence and attack. Up front, Raul Jimenez is struggling to replicate his influence prior to his head injury, while Fabio Silva and Hee-chan Hwang have yet to prove they have what it takes at this level. Whether the funds for a forward will be available if Neves isn’t sold, we must wait and find out.

7) Fulham: centre-back
At least Fulham have started to get players through the door at Craven Cottage after Marco Silva reportedly expressed his displeasure over the glacial pace of their recruitment. It was thought the Cottagers may sign as many as 10 players this summer; the first only arrived after pre-season had commenced.

That was a midfielder, while Fulham are also closing in on deals for another midfielder, a winger and a right-back. A centre-back really ought to be among their priorities too.

Fulham were hardly rock-solid last season – they conceded more than the other two promoted sides – but they could rely on their attack, Aleksandar Mitrovic especially, to outscore the opposition. In the Premier League, that won’t be the case and the Cottagers need centre-backs comfortable defending closer to their goal at the highest level.

Silva was hugely reliant on Tim Ream and Toisin Adarabioyo last season – the defensive pairing were first and third for minutes played in the Championship – but an upgrade is as necessary as the addition of more depth.

6) Newcastle: a versatile forward
The Magpies’ first summer since the takeover has been disappointingly sensible. Where they might have targeted Neymar and the like, they’ve gone for Nick Pope, Matt Targett and Sven Botman.

That’s their defence reinforced; what about their attack? Eddie Howe was very clear at the end of last season that he wanted to improve their potency going forward but so far the Toon have struggled to get forwards this summer.

They have been chasing Hugo Ekitike all year but it seems increasingly like they are being led up the garden path over the Reims youngster. If Howe only lands one attacker, it needs to be one capable of playing across his front line.

5) Manchester United: centre-forward
Erik ten Hag and John Murtough have a to-do list that simply cannot be boshed off in one summer. Top of that list, though, should be a centre-forward. Especially if Cristiano Ronaldo really is intent on dropping them in the sh*t.

Ten Hag said on Monday that he expects Ronaldo to remain at United but, in the circumstances, there was little else he could say. He and United have placed the onus firmly on Ronaldo to make his intentions clear.

The 37-year-old played through the middle last term, with Edinson Cavani as back-up on the few occasions when the Uruguayan could be bothered. If Ten Hag can’t rely on Ronaldo, and there is too much noise for it not to be a realistic concern, he is left with Anthony Martial. Surely his chance has passed…

Maybe not if United don’t source a goalscorer, which would be negligent. There is an argument for Ten Hag holding off buying a defensive midfielder right now, despite the obvious need, but the hole at centre-forward if Ronaldo leaves simply has to be filled. Ten Hag can collect all the tidy, technical players he likes, but United still need a striker to apply a finishing touch.

4) Everton: a forward
Everton will have to replace Richarlison in some form. It’s up to the brains trust at Goodison to figure out how.

The Brazilian’s departure leaves the Toffees light in attack, but finding a like-for-like replacement will be difficult. As the £60million fee proves, there aren’t many aggressive, versatile and goal-scoring forwards like Richarlison around. And those there are might not fancy this version of Everton.

Frank Lampard and his cronies will have to assess what type of forward will fill Richarlison’s boots. The new Spurs star is best coming off the left flank but was forced to deputise for Dominic Calvert-Lewin through the middle last term. Lampard already has options to play wide left; very few on the right; and his only alternative right now to Calvert-Lewin (who couldn’t be relied upon to stay fit last term) is Salomon Rondon. A right-sided forward would make sense, but we wait to see how much of their Richarlison windfall Everton will reinvest.

3) Arsenal: central midfield
Arsenal are working through their lengthy to-do list but Mikel Arteta and Edu need to get around to the centre of their midfield sooner rather than later.

They chose not to strengthen their engine room in January and while that was hardly the only reason their season ended in disappointment, it certainly didn’t help. As it stands, Arteta is far too reliant on Granit Xhaka, who has been linked with a move away, and Mohamed Elneny, who really should be nothing but consistent but uncultured back-up.

Arsenal could also do with a left-sided defensive option, but a central midfielder has to be the priority now the centre-forward position has been restocked.

2) West Ham: forward
Three signings so far for West Ham: a goalkeeper, a defender and a midfielder. Surely they will get around to a striker next.

If not, the Hammers are left relying on Michail Antonio to grind through another jam-packed season featuring what the Hammers will hope to be another run deep into Europe.

A lack of depth up front played a role in West Ham’s season petering out last term, so they have no excuses for not finding an alternative to Antonio. But there has been a strange lack of noise around the Irons and a centre-forward recruit given it is such an obvious shortcoming with the season three-and-a-half weeks away.

1) Chelsea: centre-backs
As Chelsea’s new owner and temporary (we assume) director of football, Todd Boehly could be forgiven for wanting a marquee name to kick off his stewardship. Raheem Sterling is on his way and Cristiano Ronaldo has been considered. But above all else, Thomas Tuchel needs Boehly to bring him some centre-backs.

Just from a numbers perspective, Tuchel is desperately short of central defenders. With Antonio Rudiger and Andreas Christensen gone, and Cesar Azpilicueta one of a few players waiting for Barcelona to sort their sh*t out, the Blues are left with 68-year-old Thiago Silva, Trevoh Chalobah, Malang Saar, Ethan Ampadu and Matt Miazga.

The shortage hasn’t escaped Chelsea and they are being linked with the right names – Matthijs De Ligt and Kalidou Koulibaly among others – but progress is slow, especially when at least one is required.