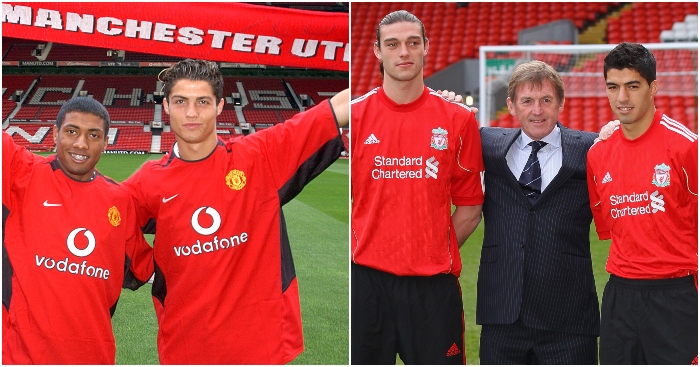 With Tottenham completing the double signing of Gareth Bale and Sergio Reguilon from Real Madrid, we got to thinking about other occasions clubs have unveiled two players simultaneously…

On July 29, 2014 – the day before Hull flew off for their first ever European tie having reached the FA Cup final two months previously – the Tigers unveiled their new signings. A couple of lads, both wet behind the ears, one from League One, the other from the SPL.

“Hopefully I can fight my way into the first team and play regularly,” said a young, slab-headed Yorkshire lad by the name of Harry Maguire. “It’s going to be a massive challenge for me but I wouldn’t have made the step if I didn’t think I could. It won’t be easy to walk into the side.”

His mate piped up too: “I know this is going to be big step but I feel I’ve got the ability to deal with it,” said wee Andrew Robertson. “The short term goal is to try to break into the team and cement my place in the starting XI.”

Indeed he did and Maguire followed. Fast-forward five years and Robertson was a Champions League winner and regarded as one of the world’s best full-backs while England star Maguire became the world’s most expensive defender having gone to Manchester United, via Leicester, shortly before he would be made captain at old Trafford.

Manchester United – Brian McClair and Viv Anderson
Sir Alex Ferguson had his work cut out when he arrived at Manchester United in 1986 and, having taken a few months to assess the squad, he set about rebuilding it.

Fergie began by making England defender Anderson and Scotland striker McClair his first signings from Arsenal and Celtic respectively. Both fees were set by tribunals, with United told to pay £250,000 for Anderson and £850,000 for McClair, despite Celtic initially asking for £2million.

Anderson was a trusted servant in three-and-a-half years before he joined Sheffield Wednesday while McClair made an instant impact at the start of an 11-year career at Old Trafford by becoming the first player since George Best 20 years before to break the 20-goal barrier in the First Division.

A beasting in Fergie’s first pre-season must have helped. “At the end of my first week I couldn’t walk because I was so full of lactic acid,” McClair told The Scottish Sun years later. “It was horrendously difficult. Viv Anderson came in the second week and he and I were staying in the same hotel. When he asked me what training was like, I said it was the worst I’d had in seven years as a pro with Motherwell and Celtic. He just laughed. Two days later Viv was literally staggering to his room in pain.”

Liverpool – Andy Carroll and Luis Suarez
We haven’t seen a January deadline day like it since 2011. Much of the action was taking place on Merseyside where Fernando Torres eventually forced his way out of Anfield, leaving Liverpool with the job of replacing the striker and £50million burning a hole in FSG’s pocket.

First, the Reds landed Luis Suarez for £22.7million after Ajax had initially told them to return with a ‘respectful bid’ following their opening offer £10million below the final price. Then, as the minutes ticked down towards 11pm, the Reds confirmed their second major signing of the day – and their most expensive signing ever – in the shape of Andy Carroll.

For Suarez, it went rather swimmingly, if you’re prepared to overlook the racism and biting. For Carroll, it was a nightmare, even from before he put pen to paper at Anfield.

“I was injured at the time, and all I’m thinking is, ‘Please just fail the medical’,” Carroll later told the Daily Mail.  “The minute I got on that helicopter I wanted to come back.

“I remember leaving Newcastle’s training ground in Kevin Nolan’s car because loads of people were outside. We went to his house and watched it on TV. I was like, ‘I’m not going’. I’d just bought a house, and a cat the day before! But then I was told, ‘You’re going’, and that was that.

“We wanted players who are used to winning, used to the pressure in the big clubs, and who are winner-types,” Arsene Wenger said during his first Arsenal pre-season. “I think Emmanuel Petit and Marc Overmars have proved before that they are used to being in clubs where you have to win, and that’s very important to us.”

While hindsight shows it to be a weird Charlie Sheen precursor, it was also Wenger at his finest. The pair were signed for less than £10m between them and helped inspire only the eighth double in English football history in their debut year.

Manchester United – Cristiano Ronaldo and Kleberson
Kleberson was the better-known new arrival on August 12, 2003 when United paid Atletico Paranaense £5.93million for the Brazil midfielder. But he was second through the door that day behind a 17-year-old from Sporting Lisbon.

Ronaldo went on to do alright. Kleberson did not. He and his 15-year-old girlfriend thought they would be joined in Manchester by Ronaldinho. But the PSG superstar got a better offer, as Kleberson explained earlier this year to FourFourTwo.

“There were two clubs interested in signing me: Manchester United and Leeds,” he said. “It was an easy choice, but there’s a funny story about it, too.

“When United’s interest in me was confirmed, I was with the national team in France for the FIFA Confederations Cup. I can remember it clearly: I was with Ronaldinho and his brother/agent, Assis. Ronaldinho said, ‘They want to sign both of us.’ I said, ‘OK, let’s go, then!’

“I was so glad that he would be coming with me. I went back to Brazil and kept negotiating with United, but then Ronaldinho fooled me and went to play in the warm weather at Barcelona! He sent me to Manchester.

“That’s a joke between us until today. He knows that he owes me one.”