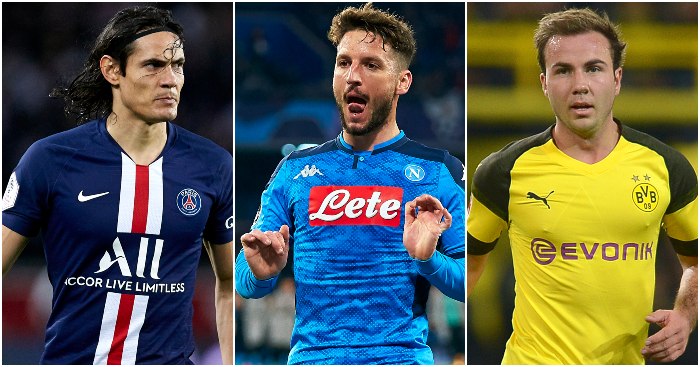 The coronavirus has caused many clubs to rip up their transfer plans. With money tight, here are 13 players who wouldn’t cost a transfer fee…

Willian
Chelsea, 31, winger
Might he re-sign? At this stage, it seems unlikely. He said so himself…
What’s been said? ”I think it will be very difficult for me to renew because Chelsea offered me two years, I asked for three and it ended there, we don’t talk anymore, we didn’t negotiate anymore.” – Willian, April, 2020
Clubs linked: Barcelona, Juventus, Arsenal, Tottenham.

Ryan Fraser
Bournemouth, 25, winger
Might he re-sign? Almost certainly not. Unless his options aren’t what he hoped they might be this time last year. But recent events may make him more attractive to the big six.
What’s been said? “Ryan’s situation is quite clear. There’s no change to it.” – Eddie Howe, January 2020.
Clubs linked: Arsenal, Chelsea, Everton, Liverpool, Leicester, West Ham

Thomas Meunier
Paris Saint-Germain, 28, right-back
Might he re-sign? Meunier has always hedged his bets until recently. He appears keen to stay but PSG are yet to reciprocate.
What’s been said? “Everything that is circulating about me on social networks in relation to Dortmund, I don’t understand. I’ve also seen so many articles linking me to Tottenham or Inter. I don’t understand this craze! My main objective is still to stay at PSG, but for the moment it’s pretty quiet.” –  Thomas Meunier, March, 2020
Clubs linked: Bayern Munich, Manchester United, Everton, Arsenal, Inter Milan, Tottenham, Borussia Dortmund

Dries Mertens
Napoli, 32, forward
Might he re-sign? It seems doubtful. There was talk of a new two-year deal in recent weeks but the latest noises suggest he will join Inter.
What’s been said? “We are talking to Dries ‘ entourage, we hope for the best. He has given this club a great deal so whatever decision he makes is fine. We are talking to his people, this is his home.” – Napoli director Cristiano Giuntoli, March 2020
Clubs linked: Arsenal, Chelsea, Everton, Manchester United, Inter Milan

Edinson Cavani
PSG, 33, forward
Might he re-sign? Almost certainly not, no.
What’s been said? “To be honest, anything can happen as there are many clubs interested in Edinson. We received calls from South America – Flamengo, Palmeiras, Internacional and Boca Juniors.” – Cavani’s agent, March 2020
Clubs linked: Atletico Madrid, Juventus, Arsenal, Manchester United, Chelsea, Boca Juniors, Flamengo, Napoli

Layvin Kurzawa
PSG, 27, left-back
Might he re-sign? Very unlikely since the 14-cap France international has hired new London-based agents.
What’s been said? No one has said much. But Kurzawa was very excited about his new agents…

Mario Gotze
Borussia Dortmund, 27, attacker
Might he re-sign? Gotze has made only six starts this season and his prospects aren’t getting any better. He’ll probably leave.
What’s been said? “It has not yet been decided. It is of course also the case with him that he would like to have more minutes. We are talking to Mario. I spoke to his father before Christmas. I spoke to him again in Marbella. We will surely get together in the spring and then make a final decision.” – Michael Zorc, January 2020
Clubs linked: Everton, West Ham, Hertha Berlin, LA Galaxy, Roma, Cologne

Olivier Giroud
Chelsea, 33, striker
Might he re-sign? He suggests he might, despite having been so desperate to leave in January. But surely now is the time to move on…
What’s been said? “Yes, yes of course [I would consider staying]. There are a few months to go, games to win and maybe another trophy, and after, you know, I think I have two or three nice seasons in front of me. It’s not the time to talk about contracts and everything, but I will make a decision when it comes.” Olivier Giroud, March 2020
Clubs linked: Tottenham, Inter Milan

Olivier Giroud did everything he could to leave Chelsea in January. pic.twitter.com/YcwwISkC9Q

Jan Vertonghen
Tottenham, 32, defender
Might he re-sign? It seems unlikely that will an option after his nosedive in form.
What’s been said? “I’m in a process right now that I have to grab a piece of paper and write down the pros and cons of the options I will have soon. I will really have to decide what I want in my career. In three to four years, I will normally return to the place where I will likely settle down. I have to start thinking about where I still want to live, what language I want to learn, what culture I still want to live in.” – Jan Vetonghen, March, 2020
Clubs linked: Ajax, Inter Milan

Jose Callejon
Napoli, 32, forward
Might he re-sign? It seems unlikely. Napoli reportedly offered Callejon a two-year extension on similar money but the player wants a pay rise.
What’s been said? “He can sign a new contract, but we don’t want to mess about… They made us an opening offer, but it didn’t satisfy the conditions of the player.” – Manuel Garcia Quilon, September, 2019
Clubs linked: AC Milan, Chelsea, Aston Villa, Espanyol

Giacomo Bonaventura
AC Milan, 30, midfielder
Might he re-sign? It is looking increasingly unlikely. The midfielder was said to be open to a renewal but it seems Milan aren’t keen to come to the table.
What’s been said? Not much, actually. Bonaventura has kept quiet and Mino Raiola is busy chirping about other clients.
Clubs linked: Lazio, Roma, Torino, Napoli, Fiorentina

Adam Lallana
Liverpool, 31, attacker
Might he re-sign? Only to finish the season, if required.
What’s been said? “I’ve seen a lot of stuff around Adam and that we’ve approached Liverpool and what not, which obviously isn’t the case. But Adam is a wonderful player and not only that he’s got a great attitude.” – Brendan Rodgers, February 2020
Clubs linked: Leicester, West Ham

Pedro
Chelsea, 32, winger
Might he re-sign? Nope. He’s off…
What’s been said? “I’m terminating my contract, but right now it’s not the most important thing, nor have I stopped to think about it. The most important thing is for everyone to show solidarity. Whatever happens regarding my future will happen, but right now it’s not important as we don’t even know when we will return to training.” – Pedro, March 2020
Clubs linked: Barcelona, Lazio, Inter Miami, NYCFC