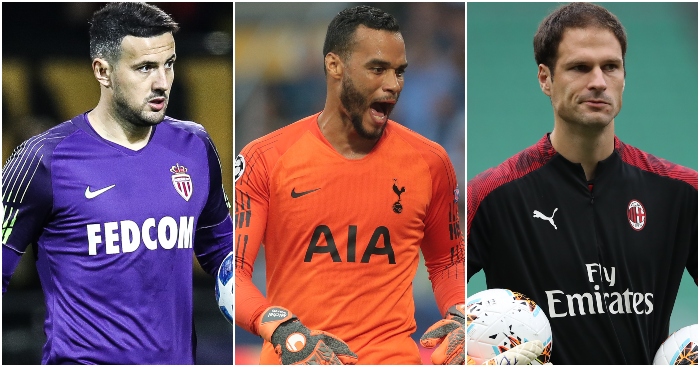 With Adrian struggling to prove himself as a trustworthy back-up for Alisson, reports have suggested that Liverpool might look for more cover while their No.1 is sidelined. Apparently, there are no talks taking place over Stoke’s Jack Butland, so here are five other keepers they could consider…

The 35-year-old is a free agent after leaving Monaco in June. He departed the club on good terms after eight-and-a-half years of service during which he helped them to Ligue 1 and Ligue 2 titles while keeping their goal during the 2016/17 run to the Champions League final.

Subasic’s last of 44 Croatia caps came in the World Cup final – weirdly, the last four losing keepers in the final have been Monaco stoppers – so Klopp is unlikely to find a short-term solution with more experience.

Subasic has been linked with Nottingham Forest, Olympicos and Al Nassr in Saudi Arabia but as yet, no club has tempted him off the sofa.

It's the second anniversary of that time Danijel Subasic stuck out a left peg to make one of the most remarkable saves in World Cup history.

The former Holland keeper would bring with him plenty of Premier League experience having played 102 times in the top flight for Swansea and Spurs. At both of his former clubs, Vorm was expected to be comfortable with the ball at his feet, though at Spurs, sometimes his hands were more of a concern.

Vorm, who is 37 next week and capped 15 times by Holland, says that watching Spurs, often from the stands, for the last couple of years hasn’t done him any harm: “I’ve been catching balls from Harry Kane and Son Heung-min every day for the past few seasons. It doesn’t make you any worse.”

The free agent has suggested that a return closer to home after nine years in English football might suit him: “A club in the Netherlands or Belgium would seem like something to me,” he said. Though he would surely be tempted by the prospect of rounding off a decade in the Premier League with a brief stint in the sticks at Anfield.

The Norwegian made 36 appearances for Aston Villa between joining the club from Ingolstadt two years ago and last week, when his contract was terminated by mutual consent so that he was free to find a new club, despite having a year remaining on his terms at Villa Park.

The 30-year-old was Villa’s starting stopper during the first half of their promotion season from the Championship in 2018/19 but an Achilles tendon rupture kept him on the sidelines for the rest of the campaign. By the time Nyland was fit again, Villa had signed Tom Heaton. Then, for the run-in, the Villans brought in Pepe Reina when Heaton was ruled out for the season with his own knee injury.

Still, though, Nyland played seven times in the Premier League last term though the arrival of another keeper, Emiliano Martinez, meant curtains for the Norwegian. Carrying the ball over the goalline against Sheffield United didn’t help his cause even if VAR missed the mistake. Villa fans remember Nyland fondly for his heroics in the Carabao Cup semi-final. Though Klopp, while considering his case, might be concerned about the keeper’s inconsistency.

⚡️One of a couple great 1st half saves by Mr Nyland vs #LCFC, that set up the most exciting night at Villa Park this season pic.twitter.com/rUHMP3GyjW 👌#AVFC

The former Republic of Ireland keeper is available after leaving Newcastle upon the expiry of his contract this summer. Elliot spent nine years on Tyneside, though he admits he was ‘naive’ to stay beyond 2018 when he was advised by Rafa Benitez to seek a new challenge elsewhere.

By then, Martin Dubravka had emerged as No.1 but prior to that, Elliot and Karl Darlow pushed each other in the fight for the gloves. That was until injury struck and Elliot has not been able to find a way back into the side since 2017.

Blackburn and Middlesborough have been credited with an interest in giving Elliot a game but a bout of appendicitis last month has hampered his search for a new club.

The Bosnian is finally getting a game for Bournemouth with Eddie Howe no longer in charge and Aaron Ramsdale having stayed in the Premier League with Sheffield United while the Cherries dropped into the Championship. But the south coast club could be tempted by an offer if Liverpool make a call this week.

Begovic is out of contract at the end of the season so they are running out of time to make any money on the keeper they signed from Chelsea for around £10million in 2017. Howe didn’t fancy him last season when the 33-year-old was loaned first to Qarabag then AC Milan, but Jason Tindall seems to have given Begovic the nod this term.

That is not to say Bournemouth don’t have options. Their alternative is Republic of Ireland No.2 Mark Travers, who started the season when Begovic was nursing a knock. With a ready-made replacement and the opportunity to make a few quid, Bournemouth would surely be willing to listen to Liverpool. For their part, the Reds would be getting a goalkeeper not long ago considered world class, one with a wealth of international and European experience.