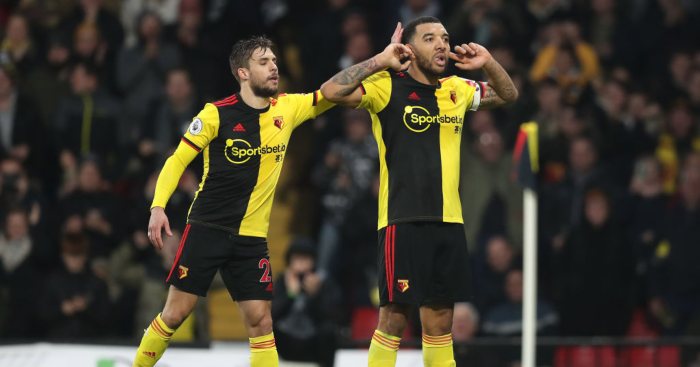 Best player: Ben Foster
Aside from being one the nicest blokes in the Premier League, Foster has also enhanced his credentials as one of the division’s best goalkeepers even in this struggling side.

Watford’s problems this season have mostly been in attack but only four keepers have faced more shots on target than Foster. Yet only four have gathered more than the 36-year-old’s nine clean sheets.

Worryingly for Watford, they still haven’t tied down the two-time reigning holder of the London Goalkeeper of the Year award (yes, that’s a thing) to a contract for next season. Tottenham are said to be among the clubs interested but Foster has been there and done it in the spotlight; he knows he doesn’t need the grief. Some have accused the former England keeper of a lack of ambition but perhaps it shows a maturity and self-awareness rare in the Premier League. And his mentality is enhancing his performances.

Despite his age, Foster’s reflexes are as sharp as ever. Saves from John Fleck and Ollie McBurnie to preserve a point at Sheffield United particularly stand out. But that was far from his best work this season…

Biggest disappointment: Quique Sanchez Flores
You could pick any one of half-a-dozen players but the manager who was brought in to save them and was sacked fewer than 90 days later has to go down as the biggest disappointment of Watford’s chaotic season.

Where the new manager bounce for Pearson stretched over the busiest month of the season, for Flores, it lasted 45 minutes against an Arsenal side with huge problems of their own. The manager who was reportedly brought back to the club to sort out their leaky defence saw them concede eight at Manchester City in his first away game in what was one of the most meek surrenders in Premier League history.

Flores’ tactics were deemed to be negative, yet without the reward of points. He managed one win in 10 games – a 2-0 win at Norwich, who eventually replaced the Hornets at the bottom of the league, where Flores left them six points adrift.

Best performance: Watford 3-0 Liverpool
The Hornets have turned in a few decent displays since Pearson’s arrival, including the wins over Bournemouth and Manchester United. But being the only side to beat – convincingly – the champions elect makes this not only Watford’s finest hour (and a half) but arguably the best performance of the Premier League season overall.

Despite Pearson’s positive influence, Watford were hardly on a roll like the Reds. They had gone five without a win before Jurgen Klopp’s all-conquering side arrived at Vicarage Road at the end of February but there was no lack of confidence as they went in at half-time unlucky only to be level.

The Hornets, inspired by Ismaila Sarr, blew Liverpool away after the break with three goals in 18 minutes. Sarr should have had a hat-trick to add an even rosier tint to the scoreline.

“Just do that every week,” said Foster after being the only keeper to shut out Liverpool this season. “It’s not hard is it, football?”

Worst performance: Manchester City 8-0 Watford
It wasn’t the heaviest thrashing of the Premier League season – Southampton sh*t their bed even more spectacularly in the presence of Leicester – but it’s hard to recall a more spineless performance.

Okay, City can do this to anyone on their day, They almost did it to Watford in the FA Cup final three months earlier, but at least at Wembley Gracia’s men showed some fight. At the Etihad, they were behind inside a minute; 5-0 down by the 18th minute; and seven down before the hour, at which point they would have been delighted to only concede eight.

Foster admitted exactly that: “You come away to Man City, you want to keep it tight and stay in the game as long as possible. But we didn’t, none of us did our jobs today… it’s 5-0 after 20 minutes and I’m fearing the worst. I’m thinking this could be 10, 11, 12, easy today.”

Just watch it. City’s kids and reserves probably offered more resistance when Pep put his champions through shadow play the day before…

Biggest VAR moment: Double injustice at Tottenham
Watford were still without a win when they went to Tottenham deep into October. The fact they left White Hart Lane without their first three-point haul left Quique Sanchez Flores fuming.

Sanchez Flores had a couple of reasons to be furious with VAR. Firstly, Spurs’ late equaliser was allowed to stand despite claims of a foul by Harry Kane and handball against Dele Alli in the build-up. Even the screens inside the stadium said the goal had been disallowed but, no, the officials opted not to rule it out.

That only heightened Watford’s sense of injustice after VAR had failed to intervene when Jan Vertonghen hauled down Gerard Deulofeu in Spurs’ penalty area in the first half.

“I saw it many times and in my opinion it’s very clear, it’s a penalty,” Sánchez Flores said. “If you can stop the imagination it’s very clear to see. I have no idea what they reviewed, I don’t know how they work. I thought that VAR was something objective but I’m starting to think it’s something very subjective again.”

Dick move: Replacing Gracia in half an hour
Sacking Gracia in itself wasn’t an indefensible decision. Watford got off to a terrible start and their FA Cup run masked an alarming slide during the second half of last season.

“Javi has represented Watford with great dignity and will always be deserving of our fullest respect for his achievements,” said Scott Duxbury upon squeezing the trigger in Gracia’s direction during September’s international break. But the Hornets barely gave Gracia time to clear his desk before Sanchez Flores was rearranging the furniture.

Just 30 minutes passed between statements announcing Gracia’s sacking and Sanchez Flores’ return. Of course, it made sense to have a replacement lined up but, lads, at least give it an hour or two.

Did their recruitment work?
Watford broke their transfer record to sign Sarr for £30million and the winger has recovered from a slow start to show that the Hornets have made a savvy investment. His goals have been worth a precious six points for Pearson.

Dawson has improved after a shaky start following his move from West Brom but the back four still requires remodelling. Welbeck, sadly not surprisingly, has spent the vast majority of the season on the sidelines.

If Watford survive, they must do better in the market this summer.

Manager’s job security:
Is any manager ever secure at Watford? Pearson is the Hornets’ 12th manager in eight years and his contract takes him only until the end of the season.

Should Watford preserve their Premier League status, you would assume they will tie Pearson down to a longer deal, even if he isn’t the owners’ usual type of manager. The squad have certainly taken his message on board since he was appointed on December 6 and Foster has urged the club to bring some clarity to the manager’s situation.

But it makes sense for Watford to wait until they know which division they will be playing in next season. Pearson prompted the kind of new manager bounce that the Pozzos dream of but after a fantastic month around Christmas, the Hornets slumped again prior to raising their game for Liverpool.

For Pearson too, it would be savvy to hold back before putting pen to paper. Watford have never provided their managers with stability – aside from the four-and-a-half-year contract handed to Gracia which was torn up after less than 10 months – and that early-reign run coupled with being the only boss to better Klopp could be enough to tempt another chairman who might offer a better prospect of longevity.

What they need in the summer:
To stay up. Sort out the managerial situation, then pin down their player of the season.

If Watford do slip into the Championship, you can expect their squad to be purged, with the likes of Sarr, Deulofeu and Abdoulaye Doucoure all likely to head towards the exit. Doucoure is already making noises about moving on.

Only when this Premier League season is concluded, however that may be, can Watford begin making plans for next term. As a minimum, the back four needs refreshing; central midfield requires attention even if Doucoure stays; and a goalscoring centre-forward is required if Welbeck can’t be dat guy.