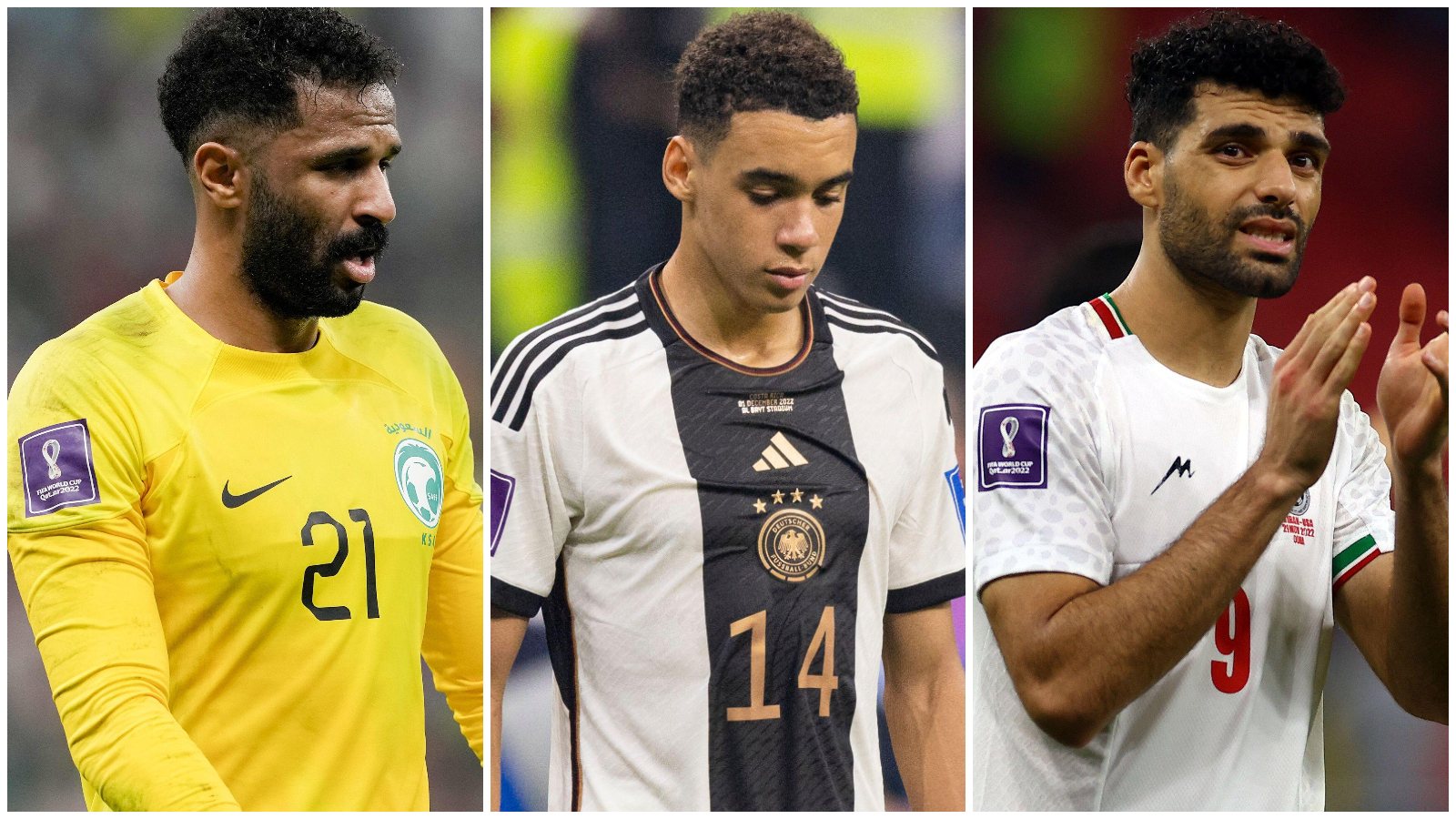 Jamal Musiala was the very best of a bad bunch for Germany. And Al-Hilal’s No.1 must be bloody brilliant if Saudi Arabia’s stopper can’t get a game.

Here are five players who graced the World Cup stage, albeit too briefly…

Jamal Musiala
There is plenty of blame to go around for another early dart on Germany’s part but little of it should fall at the rapid feet of their best player in Qatar.

“What Jamal showed against Costa Rica – it’s just unfortunate that such a player can’t continue to play in the tournament. He is fantastic,” said Hansi Flick as he began to process his side’s group stage exit. It came in spite of Musiala’s best efforts in the must-win final game.

The teenager completed a ridiculous 12 dribbles against Costa Rica as, once again, he carried by far the biggest threat for a side woefully missing a top-class goalscorer. His end product was lacking – Musiala hit the woodwork twice – but the 19-year-old has plenty of time to fine-tune his finishing.

His performance offers a crumb of comfort for the Germans as they embark upon another root and branch review. But with Musiala spearheading a group of up-and-comers, including Florian Wirtz and Youssoufa Moukoko, things may not be so bad after all.

If Jamal Musiala were a sovereign country he'd be top ten for successful dribbles pic.twitter.com/v9tvp8hqR2

Enner Valencia
While Musiala has many more tournaments ahead of him, we’ve almost certainly seen the last of Valencia on the biggest stage. In which case, the Ecuador striker signed off in style.

Valencia will have been home for a few days now but he still remains one of the joint-top scorers in Qatar with three goals in three Group A matches. If that was the 33-year-old’s final World Cup, Ecuador need to find a replacement for his goals. Moises Caicedo’s strike against Senegal represented the first World Cup finals goal scored by an Ecuadorian other than Valencia since 2006.

The ex-West Ham striker outperformed his xG of 2.27 and rated as Ecuador’s best player in Qatar, according to Whoscored. His international performances have been an extension of his club form, with Valencia scoring 15 goals and creating four more in 22 games for Fenerbahce this season.

Luis Chavez
Edson Alvarez was impressive for Mexico but, as the just-axed Gerardo Martino commented after their win over Saudi Arabia, which wasn’t enough to qualify from Group B, the Ajax man was only out-performed by Chavez.

His stunning free-kick against Saudi Arabia was an early contender for goal of the tournament but his overall performances in Mexico’s midfield belied the lack of quality elsewhere, especially up front.

Indeed, Chavez didn’t try to hide his frustration over his team-mates’ and coach’s failure to reach the standards he did. “In the second game with Argentina, we didn’t understand what he wanted us to do. We defended well for a period of time, but we did not create any chances – so goals could not be scored and we ended up losing that game.”

“Personally, I feel very sad. We stopped doing a lot of things in the first two games and we reacted a little too late… I’m leaving the World Cup very down about it.” Chavez can console himself with the fact his performances did not go unnoticed, with Bayer Leverkusen reportedly ready to bring him to Europe from Pachuca.

Mohammed Alowais
Aged the wrong side of 30, perhaps their World Cup performances for Saudi Arabia have come a little too late for Alowais, Salem Aldawsari and Yasir Al Shahrani.

For Alowais, it was a rare foray into the spotlight since the 31-year-old is not even first choice for his club. Abdullah Al-Mayouf takes the gloves for Al Hilal but he retired from international duty in 2019 before reversing his decision. Herve Renard, though, opted not to pick the 33-year-old, keeping faith with Alowais, which proved to be a shrewd move.

He was outstanding in the famous win over Argentina and without his heroics against Mexico, the scoreline would have been a lot worse for Saudi.

4.3 – Wojciech Szczesny has prevented the most goals of any goalkeeper at the #FIFAWorldCup this year, based on the quality of shots on target faced (2 conceded from 6.3 xG on target conceded).

Mehdi Taremi
Deciding on Iran’s best player was a close-run thing between Taremi and defender Ramin Rezaeian. Both deserve huge plaudits for their performances in Qatar, especially since none of us really know what else they were dealing with around the political situation back home.

Taremi has been criticised more than most for failing to use his platform to speak out against the Iranian regime. The squad’s silent protest during the anthem before their opening game against England resonated but those who hoped for further action we left disappointed. Reports suggest the players and their families were threatened if they did not sing the anthem in their next two matches.

That being true, it makes their performances against Wales and United States all the more commendable. Chris Mepham and Joe Rodon teamed up to take care of Taremi and still failed to shackle the centre-forward.

Most chances created in a single World Cup game across the last two tournaments:

Iran's No.9 is so much more than a No.9. 🙌@midnite | #FIFAWorldCup pic.twitter.com/amzCnfPu6c