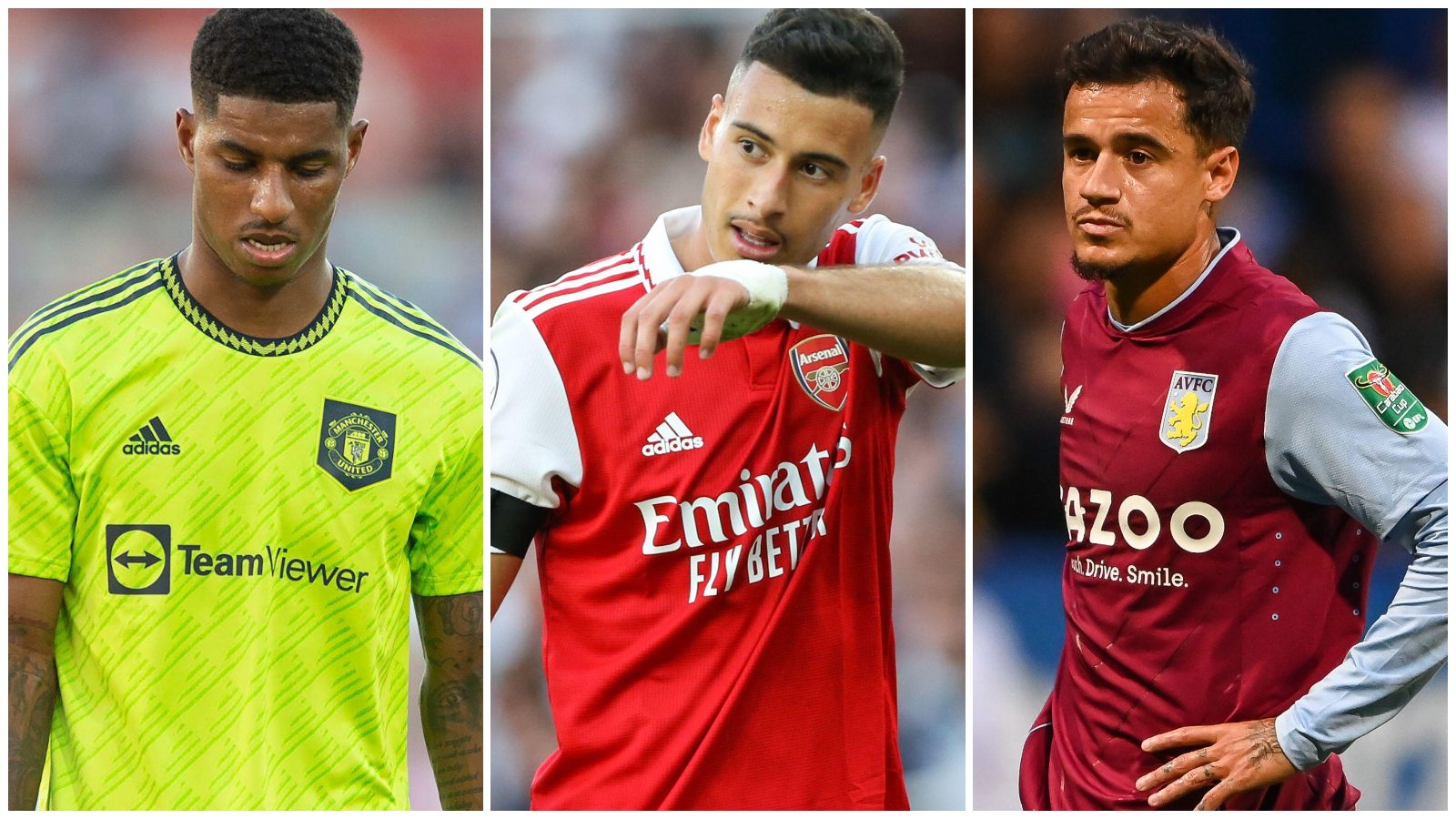 Three Arsenal players are second-guessing the Brazil coach, a 146-cap veteran is sweating, while a West Ham winger has a Man Utd star breathing down his neck.

With the Premier League returning this weekend, here are 20 players all stewing over their World Cup prospects…

Arsenal – Gabriel Martinelli
The last Brazil squad before the World Cup was a bit of a head f***. Tite has experimented somewhat, leaving out three Arsenal players. Gabriel Jesus ought to be just fine but Martinelli’s omission is a bigger concern with Qatar looming. The uncapped Gabriel Magalhaes is probably sweating too after Roma’s Roger Ibanez and Juventus’s Gleison Bremer were called up instead. Martinelli and Gabriel both need to catch the eye with 13 fixtures between now and the World Cup.

Aston Villa – Philippe Coutinho
The Brazil forward was ‘hurt’ to be axed by Tite for the current internationals but he’s made the best of a bad situation by nipping off to the Maldives. Coutinho hasn’t started the season well – he finished last term poorly too – so he can’t argue with a first omission in over a year. The 30-year-old needs to heed the warning, return refreshed from his holiday and start performing for Villa in the coming weeks if he is to get back in Tite’s good books.

Bournemouth – Marcos Senesi
The Bournemouth new boy presumably hoped a move to the Premier League might have cemented his place in the Argentina squad after making his international debut in June. But a shaky start to life in England has seen Senesi lose his place in the squad for the final friendlies. In fairness, the centre-back was chucked in at the deep end, with his first start coming in the 9-0 defeat at Liverpool. But he needs to find his feet quickly if he hopes to regain his spot in Lionel Scaloni’s squad.

Brentford – Ivan Toney
The centre-forward seemed to have timed his run into the England squad just right, making the final squad before the World Cup. But Toney watched the defeat to Italy from the stands and remained on the bench for the draw with Germany. Gareth Southgate says the Brentford striker can ‘definitely’ play his way into the World Cup party but he’ll be feeling rather less chipper over his prospects now than a week ago.

Brighton – Alexis Mac Allister
Moises Caicedo, Pervis Estupinan and Jeremy Sarmiento were all sweating on their participation before FIFA threw out Chile’s appeal over Ecuador’s place in Qatar. Mac Allister isn’t certain yet of his place in Argentina’s squad, with it looking like two from him, Liverpool target Enzo Fernandez and Bayer Leverkusen’s Exequiel Palacios. The latter, though, missed the current international break because of a hamstring injury, with Mac Allister coming off the bench for the 3-0 win over Honduras.

Chelsea – Wesley Fofana
The Chelsea new boy hasn’t yet made a senior squad with the defender being kept with the Under-21s for now. But L’Equipe claims Fofana ‘strongly believes’ he can break into Didier Deschamps’ group in time for the World Cup. Ivory Coast are monitoring the situation in the hope of tempting the defender to switch allegiances.

Crystal Palace – Marc Guehi
The Palace centre-back is hovering close to the cut in Southgate’s mind, with Guehi called up in the 28 but not used in the Nations League matches against Italy and Germany. The ex-Chelsea youngster needs to maintain his consistency to cement his place in Southgate’s 26-man final squad. We have him just in.

Everton – Amadou Onana
The Everton new boy made his first appearance in a Belgium squad in June and his first start in the Nations League defeat to Holland on Sunday. Onana impressed in Amsterdam and looks to have given himself a good chance of making the final cut. If he performs in the next few weeks as he has for Everton since joining in the summer, then Roberto Martinez will surely be taking the 21-year-old to Qatar.

Fulham – Luke Harris
The teenager made the Wales squad for the first time during the current international break, despite having yet to appear in the Premier League. If Harris can get himself off the bench to make an impression, then Robert Page admits he may be tempted to keep him in his squad for Qatar: “I never say never – absolutely.”

Leeds United – Diego Llorente
Llorente made the Spain squad for this week’s Nations League fixtures, which may have come as a relief since his early-season form has been iffy. He didn’t feature, though, so Llorente needs a convincing few weeks to firm up his place in Luis Enrique’s reckoning.

Leicester – Wout Faes
The Leicester new boy remains very much on the periphery despite being named in Roberto Martinez’s squad for the Nations League win over Wales and defeat to Holland. Faes failed to make the bench in either game and has played only five minutes for the Red Devils. It can’t help playing in a defence as leaky as Leicester’s but Faes needs a solid month or so to seal his place on Belgium’s plane.

Liverpool – Trent Alexander-Arnold
Southgate obviously doesn’t fancy Alexander-Arnold much, which may boil the p*ss of pundits, but the Liverpool defender’s form offers little evidence that the England manager is wrong. Should he discover some defensive nous in the coming weeks, then Southgate might warm to the idea of playing the Liverpool star. Otherwise his squad place could be in serious jeopardy.

One of the many reasons I admire Trent Alexander-Arnold as a professional and a person is that he keeps reporting for England duty even though he knows that the manager, Gareth Southgate, does not really believe in him. It's sad, it's a waste, and it's England's loss. #ENG #LFC

Manchester City – Kalvin Phillips
When we looked at City’s World Cup probables and possibles, none of Pep Guardiola’s players really had much to worry about. But Phillips’ shoulder injury is a concern, even if Southgate isn’t fussed about fielding players struggling to get minutes at club level. “The honest answer on the injury is we don’t know. It’s obviously going to be very tight,” said the England boss when asked about Phillips’ prospects this week.

Manchester United – Marcus Rashford
It seems it will take something cataclysmic for Southgate to drop Harry Maguire, a fate that had already befallen Rashford and Sancho. But the England boss keeps offering words of encouragement for United’s attacking duo – he did so again on Tuesday night – and both have showed glimpses of form through the start of the season when they really needed it. Rashford is perhaps in the stronger position of the two; a run of goalscoring form might get him on the plane yet.

Newcastle United – Nick Pope
The Newcastle keeper was probably sat snug as second-choice prior to the Italy defeat and Germany draw, and being picked for both was a further sign of Southgate’s confidence in Pope. But his performance against Germany was shaky to say the least. With four keepers vying for three spots, he needs to make sure it’s a one-off when he returns to the Newcastle net.

Nottingham Forest – Dean Henderson
Henderson will have struggled to stifle a smile while he watched Pope struggle on Monday night. The Forest keeper was fourth in the pecking order with only three keepers needed for Qatar but, knowing Henderson as we do, he’ll still fancy himself to make the cut. He needs some top-class performances for Forest while hoping Pope and/or Aaron Ramsdale chuck a few in over the next month.

Southampton – Armel Bella-Kotchap
The Saints new boy received his first Germany call-up this month and made his senior debut by coming off the bench for the final moments at Wembley. Hansi Flick has been impressed with what he saw in training. Should he maintain the form that has caught everyone’s eye through his first few games in the Premier League, then Flick will be hard pushed to leave him out of his final squad.

Tottenham – Eric Dier
Clement Lenglet and Emerson Royal look set to miss the France and Brazil planes respectively, but few others at Spurs seem to have much to worry about before Qatar. Dier has regained his England place at the perfect time and the fact he started both Nations League games this week highlights his status in Southgate’s mind. His only concern should be avoiding injury or catastrophe.

West Ham – Jarrod Bowen
The Hammers forward retained his place in the England squad despite a wretched start to the Premier League season. The fact he saw no action against Italy or Germany – he watched the second of those games from the stands – has to serve as a kick up the arse, with Rashford eyeing up his seat on the plane.

Wolves – Joao Moutino
Moutinho’s 146 caps haven’t made him immune from being dropped, with the veteran midfielder missing from the Portugal party for the current Nations League games despite playing in the five games he was fit to appear in for Wolves. Moutinho is in good company at Molineux – Nelson Semedo, Goncalo Guedes and Daniel Podence all missed the cut for Fernando Santos’s last pre-World Cup squad.