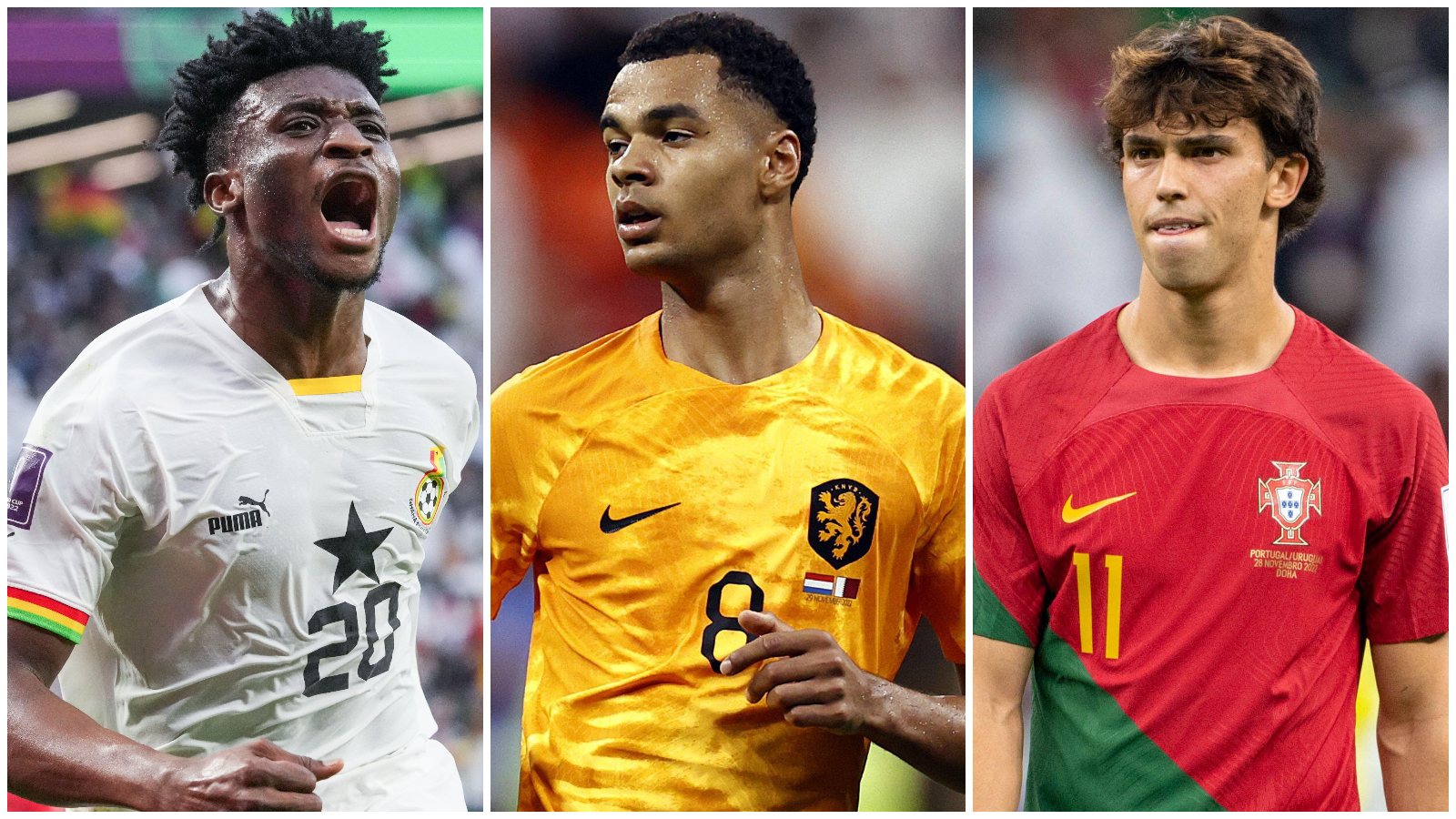 Featuring a midfielder who has caught Liverpool’s eye, a couple of Man Utd-linked forwards, and a potential Chelsea partnership at the back…

The World Cup always offers a shop window for players looking to take their next steps and this tournament is no different, despite the weird winter scheduling.

Here’s an XI of players who’ve so far done their chances of a move no harm, even if some have boosted their prospects more than others…

Diogo Costa (Portugal)
The Portugal keeper is said to be on the radar of Manchester United, Tottenham and Chelsea, all of whom were probably dismayed to see Costa recently renew his contract with Porto. That, though, doesn’t make him unattainable – just more expensive. None of those clubs appear to have been perturbed by the 23-year-old’s valuation of around £65million and upon watching him at the World Cup, his suitors will have seen a safe pair of hands, who is performing roughly as expected, according to his +0.1 psXg. He might consider checking his wing mirrors more, though.

Diogo Costa goalkeeper of Portugal,
Predator Inaki Williams from Ghana
and the reaction of Ronaldo in one…
Diogo Costa almost caught out #Portugal #FIFAWorldCup #Qatar2022 pic.twitter.com/999P7T8f01

Theo Hernandez (France)
The France defender’s performances for AC Milan have already alerted the big boys and Hernandez is making the most of his World Cup window. The left-back, with six assists in nine caps, is only playing because of an injury to his older brother Lucas but Theo’s inclusion seems to have given France a bigger threat down the left, with the full-back bombing on to link up with Kylian Mbappe. It’s a pairing Real Madrid reportedly dreamed about.

Edson Alvarez (Mexico)
The Mexico star has been playing in a defensive-midfield role for his club and country for the most part this season but Alvarez can play at centre-back too, where he fills in here as he tries to retain Chelsea’s attention. The Blues wanted to sign him from Ajax during the summer, but the Amsterdammers had to draw the line somewhere amid an exodus of other talent so Alvarez was made to stay put – for now. In Qatar, he remained on the bench for Mexico’s 2-0 defeat to Argentina but started the games either side, which El Tri drew and won. The now departed – sacked, not dead – Gerardo Martino rated Alvarez second only to Luis Chavez as they beat Saudi Arabia.

Josko Gvardiol (Croatia)
Another Chelsea target, Gvardiol has attracted attention far beyond west London with his performances for RB Leipzig. Barcelona are known to be monitoring the 20-year-old while Tottenham are also reported to be watching him in Qatar. There they will have seen him start both of Croatia’s opening games, averaging a WhoScored rating of 7.04 in the draw with Morocco and win over Canada.

Denzel Dumfries (Netherlands)
Scouts are keeping a very close eye on both Netherlands right-backs in Qatar. Dumfries has been linked with Manchester United, Chelsea and Tottenham since the summer when it emerged Inter may be willing to sell. Apparently, he’s the player most likely to be sacrificed as the Italians look to raise funds for other areas of their squad, so they will be chuffed to see him impress on three starts for his country. Another United target, Jeremie Frimpong, is not having as much fun in Qatar, with the Bayer Leverkusen defender now injured after watching Netherlands’ group campaign from the bench.

Sofyan Amrabat (Morocco)
Liverpool need a midfielder – that’s blindingly obvious. And, apparently, they have eyes on Amrabat while Morocco impress through the group stage. The Fiorentina star is also holding Tottenham’s attention on the back of fine performances against Croatia and Belgium and the 26-year-old could be available for as little as £12.5million.

Sergej Milinkovic-Savic (Serbia)
The Serbia midfielder has been linked with the Premier League ever since Jose Mourinho became a fan in 2017. Interest from United eventually waned before it was renewed this summer as Milinkovic-Savic entered the final two years of his contract at Lazio. Not surprisingly, other clubs are alert to a potential bargain, especially since not long ago he was rated around £100million, with Juventus and Arsenal keen. The 27-year-old scored amid the madness between Serbia and Cameroon, after going toe-to-toe with Brazil’s midfield.

Mohammed Kudus (Ghana)
The Ghana attacking midfielder has arguably done more than any other player to boost his profile at the World Cup. Everton wanted the Ajax star last summer and having failed to do a deal, it seems the Toffees have missed their opportunity. Because Liverpool, Real Madrid, Chelsea, PSG, Arsenal, Tottenham, Newcastle Borussia Dortmund, Napoli and Atletico Madrid are all sniffing around the 22-year-old. Steady was impressed after Ghana beat South Korea.

Cody Gakpo (Netherlands)
The PSV striker was tailed by Manchester United, Leeds and Southampton in the summer and Gakpo has done his chances of a big move no harm whatsoever in Qatar. The forward has scored in each of Netherlands’ group games to sit among the top scorers. His performances at the World Cup are just an extension of his form for PSV, for whom he’s had a hand in 30 goals in 24 games, scoring 13 and laying on 17. No wonder United are talking to his agents about getting him to Old Trafford in January.

Noah Okafor (Switzerland)
Another young forward who has attracted attention from many of Europe’s big hitters, Okafor hasn’t yet enjoyed the same success as Gakpo at the World Cup. The RB Salzburg star, who has scored 10 goals in domestic and Champions League action this season, has only managed 18 minutes off the bench in Switzerland’s opener before remaining on the sidelines for the defeat to Brazil. That’s unlikely to spoil his chances of a big move, with so many clubs credited with an interest in the 22-year-old. Manchester City, Liverpool, Chelsea, Arsenal and AC Milan are all said to be sniffing, with Leeds also understood to be willing to offer Okafor a stepping stone.

Joao Felix (Portugal)
Felix is trying to catch the eye in Qatar having fallen out of favour with Diego Simeone at Atletico Madrid. The Portugal star has spent too much of the season on the bench for his liking, especially for Atletico’s big Champions League matches. He has enjoyed more of a run at the World Cup, starting in both of Portugal’s wins so far, scoring against Ghana. United were supposedly willing to chuck around £100million at Atletico during the summer so they may be interested to hear the Rojiblancos’ asking price has come down to a mere £86million. Which still seems a lot for a lad who can’t get in the team.