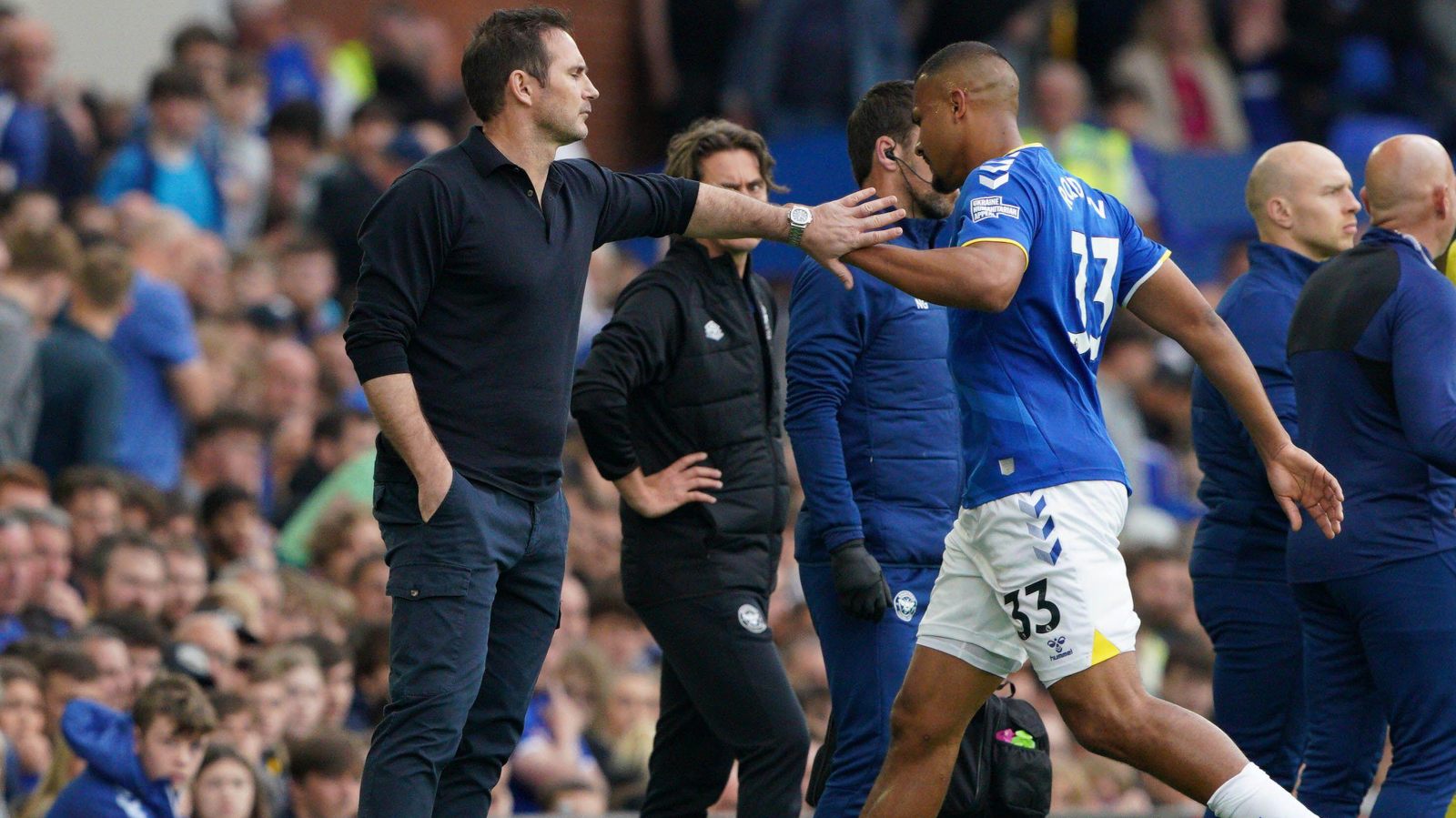 Four minutes is all it took for Salomon Rondon to make himself the captain of the Premier League’s worst XI of the weekend. He’s joined by two Toffees team-mates.

Here are the Prem flops from Sunday’s action, according to WhoScored ratings…

GK: Ben Foster – 4.45
Not the way Foster wanted to bring down the curtain in his final game at Vicarage Road. The Watford keeper was culpable only for one of Leicester’s five goals, but going full Superman at the edge of his own box only to be beaten to the punch by Jamie Vardy was a fittingly calamitous way to end a torrid season at home for the Hornets.

CB: Jarrad Branthwaite – 5.37
Frank Lampard had a moan at the referee after Branthwaite’s red card but even the Everton boss admitted his centre-back crewed up. “It’s a mistake by Jarrad to let him run in behind,” him being Ivan Toney. “We’ve got to get running early, drop off, deal with it easily, and we didn’t.” Branthwaite is wet behind the ears, but even for a rookie, it was a bad one.

CB: Craig Cathcart – 4.86
One half of Watford’s Chuckle Brothers tribute act for Leicester’s first goal and hopelessly misjudged a simple ball over the top which Vardy pounced upon for the Foxes’ fourth. Woefully exposed by his midfielders but wretched all the same.

CB: Mads Bech Sorensen – 5.25
With Branthwaite shooting himself in the foot, Sorensen followed suit when he conceded a penalty, just before half-time, for a lazy pull on Richarlison after bottling out of challenging for a bounding ball. That came after he was booked for a late tackle while chasing his own ropey touch. Unsurprisingly hooked at the break.

RWB: Vladimir Coufal – 5.36
The West Ham right-back was given the runaround by Jack Grealish on an afternoon he failed to win a tackle. So perhaps it was not surprising that he lost his bearings while throwing himself at Riyad Mahrez’s in-swinging free-kick, gifting City their equaliser.

LWB: Adam Masina – 6.21
The Watford defender can consider himself a little unfortunate to be selected here. He was the seventh-worst Hornet against Leicester but on a strong weekend for left-backs, Masina gets the nod. That said, the Italian missed a great chance from point-blank range for Watford to double their early lead and ran into Cathcart to allow Leicester their leveller.

CM: Moussa Sissoko – 6.11
Sissoko’s midfield partner Dan Gosling actually rated lower at 6.04 but he had to be subbed at half-time having taken a knock. Sissoko saw out the 90 minutes, which completely passed him by as Watford captain while Leicester had their way with them.

CM: Andre Gomes – 6.05
The Everton midfielder justified his inclusion in this worst XI of the season with another nothing of a display against Brentford. In his defence, Gomes was returning from a spell on the sidelines, but he looked off the pace of the Brentford midfield, even before Everton started shedding players.

RF: Riyad Mahrez – 6.16
The winger was as quiet as any other City player before Pep Guardiola woke them up at half-time. Mahrez even set up the equaliser with a devilish set-piece delivery but missing a late penalty slashed his rating. As did 13 crosses that all found the head of a Hammer. And losing possession 22 times can’t have helped…

CF: Salomon Rondon – 4.94
We normally excuse substitutes, especially those that enter the fray on 84 minutes. But the fact he was running back off four minutes later after an unfathomable attempt at a challenge not only earns him a call-up for the worst XI, Rondon gets the captain’s armband. The ‘C’ on his bicep stands for something different, though.

LF: Maxwel Cornet – 5.87
Aside from one first-half effort that Hugo Lloris was equal to, Cornet spent Sunday lunchtime on the periphery at the Tottenham Hotspur Stadium. That was his only effort on goal and only contribution of any note. Cornet lost all but one of his eight duels and relinquished possession 11 times.