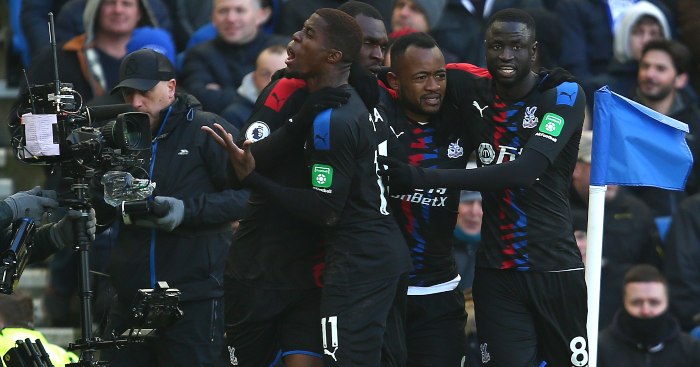 It’s hard to think of any better use of £2.5million last summer than Crystal Palace’s investment in Jordan Ayew.

The Ghanaian’s signing barely registered beyond Selhurst Park and even Palace fans were underwhelmed at the 27-year-old’s permanent arrival having seen him score two goals while on loan from Swansea last season.

But Ayew has become one of the key figures in Roy Hodgson’s side, which claimed bragging rights in their rivalry with Brighton courtesy of the unassuming forward’s seventh goal of the season.

Ayew accounts for 28 per cent of Palace’s total haul in the Premier League so far and his 70th minute winner, a cool finish which sneaked beyond Mat Ryan, lifted Palace off the bottom of the top flight’s scoring charts in a season where the Eagles seem to be breaking their own records in every other sense.

Palace sit on 36 points which not only offers them the snug feeling of security in 12th place, their tally is the best with 10 games to go since Steve Coppell’s reign in the early 1990s. It is a success built on defensive security, but Ayew’s goals have been responsible for exactly a third of their points this season. Only Andy Johnson has earned Palace more points in a single season – 15 in 2004-05 – and Ayew has 10 games left to match the former England striker’s achievement and perhaps set a new benchmark.

Hodgson will have been delighted for Ayew to bag since that was the only thing missing from his performance in the win over Newcastle last weekend. “He had a wonderful game,” said Hodgson after the Magpies were downed. “He comes off a little disappointed because he wants to score goals. But what he is doing for the team is immeasurable.”

Palace are fortunate that Ayew is stepping up with his joint-best Premier League haul because Christian Benteke continues to fluff his lines in front of goal while Wilfried Zaha seems to be fighting a battle with himself as well as every Seagull crammed into the AmEx this lunchtime.

7 – Jordan Ayew has scored seven goals in the Premier League this season; his joint-most in a single campaign, along with 2015-16 and 2017-18. Breakthrough. pic.twitter.com/Q3JUIOyXQr

Despite a woeful first-half miss, Benteke has at least played a role now in two goals in Palace’s last three games. It took him 34 games prior to that to register two goal involvements. But Zaha’s struggles continue as Palace’s pantomime villain on the same day an interview was published in which he said he wanted to get away from that perception.

“It does frustrate me… For some reason, I’m that pantomime villain that every club hates. Every team,” he told The Mirror this week. But Zaha was far too willing to play that role for the Brighton supporters, cupping his ear to supporters after he had run down another blind alley, before getting involved in a clash with Ezequiel Schelotto that only played into the hands of those trying so hard to get a rise out of him.

That was typical of his day at the AmEx against a team he has a good record against. Zaha could barely shake the attention of 6ft 7in left-back Dan Burn and on the couple of occasions he escaped, he missed an open goal in added time before blazing over with the last kick of the game. That miss mattered little to the Palace fans taking evasive action behind the goal since the final whistle immediately followed. But as the Palace players hung around to receive the acclaim of the travelling support, Zaha exited the stage after another off-colour performance with a face which suggests he fears he may have missed the boat on the big move he feels he deserves. Three goals and the same number of assists this season is unlikely to prompt any Champions League side to cough up the kind of fee Palace still expect.

But their hero once again today was the striker who cost around one-thirtieth of the asking price for Zaha but is turning himself into Palace’s most indispensable attacker.