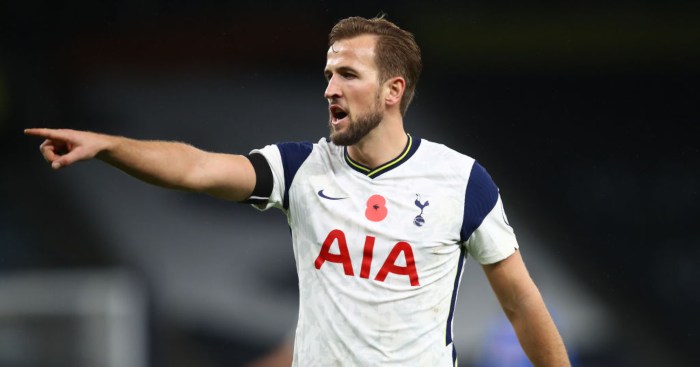 Harry Kane’s career is stuck on a loop. Generally takes about a year for each full cycle to play out, and we’re currently somewhere around number four. Our handy guide should help you predict and keep track of what happens next…

Harry Kane is scoring numerous goals for club and country, although naysayers will point out that his scoring record would be marginally less impressive if you excluded penalties because only he and Bruno Fernandes are gauche enough to score such cheap and easy goals that obviously shouldn’t really count. It will also be noted that Kane’s goalscoring exploits have not brought tangible success in terms of silverware, and also that he talks funny. Stats nerds will insist that Kane’s underlying numbers show this is just a purple patch and declare his current form unsustainable over a longer period.

2) Harry Kane sustains this form over a longer period

A run of 10 goals in eight games is dismissed because it failed to secure a trophy for his side, even though it happened in November and December. A hat-trick against a team 18th in the league is evidence of Kane being nothing more than a flat-track bully. An equalising goal against Liverpool doesn’t count, because it was a penalty. Goals against Arsenal are neither one thing nor the other and thus also summarily dismissed. Journalists who wish the Premier League were more open and competitive instead of the best players all being stockpiled by the biggest clubs produce thinkpieces about why Kane must instantly move to Manchester City to reach The Next Level.

3) Are Tottenham/England too reliant on Harry Kane?

They’re just the Kane Team, aren’t they? You know, Spurs? One-man team, mate. Nothing without him, even though he’s not even that good really. Spurs are rubbish, that’s why. And England. Southgate will probably pick Mason Mount in Kane’s place, won’t he? Classic Southgate, that. Doomed.

4) Harry Kane breaks some record or reaches some milestone

Be it an arbitrary number of goals deemed noteworthy because of our ingrained fondness for the base 10 numbering system or a large number of goals within an arbitrary time period deemed noteworthy because of our fondness for the Gregorian calendar, this will offer proof of either Kane’s unprecedented world-class brilliance or his demonstrable fraudulence. Numbers will be pulled and squeezed and contexted way beyond breaking point to show why Kane is not as good as Your Shearers, Your Henrys, the Likes of Your Agueros or the Robbie Fowlers of This World. If the numbers prove too resilient, Kane will instead be accused of lacking an ethereal and ill-defined “X-factor” or “certain something”. At this point pundits will line up to declare with confidence either that Kane will never beat Alan Shearer’s Premier League goals record or that Kane will definitely beat Alan Shearer’s Premier League goals record. While neither camp can find any common ground on the main issue, they will reach across the aisle to agree that Football Wasn’t Invented In 1992, Actually.

Playing his 14th match in 29 days, Kane overstretches while trying to prevent a corner as Spurs protect a 4-0 lead with seven minutes remaining. He is expected to be out of action for eight weeks.

6) How will Tottenham/England cope without Harry Kane?

Is this the end for Tottenham/England’s Carabao/Europa/top four/Euro/World Cup/Nations League hopes? How might Tottenham/England line up in his absence? If there’s a major international tournament nearby, this will be front-page news for at least a week.

7) Are Tottenham/England actually better off without Harry Kane?

Son Heung-Min scores five goals as Spurs win three and draw one of their first four games without Kane. Sir Marcus Rashford scores twice in a promising and efficient England friendly win against Sweden, who are always dangerous opponents not to be underestimated. “Do Tottenham/England even need Kane at all?” ask extremely Intelligent Thinkers. “Is the daft bloke with the 0.69 goals-per-game ratio in fact holding Tottenham/England back?”

8) Harry Kane returns to action four weeks ahead of schedule

After a punishing rehab schedule, and in great news for club and country, Kane is ready to return just a month after an injury that looked sure to ruin his season.

He looks off the pace and is struggling to get on the ball. He’s scored a penalty (obviously) and a tap-in rebound but looks nothing like the goal-bothering menace of old. Have we already seen the best of Harry Kane?

And back to No. 1. But he still doesn’t win any trophies.