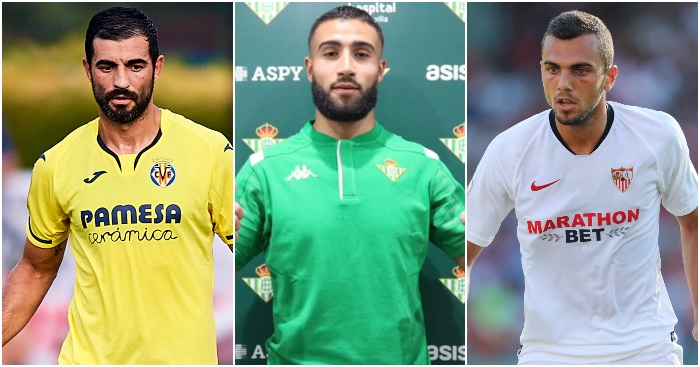 We already have a strong candidate for signing of the summer in Spain. Nabil Fekir, the World Cup winner who nearly joined Liverpool for €60m last year, has joined Real Betis for just €20m. There may be some doubts over his fitness, but signing a player of his pedigree looks like a huge coup for the Andalusian side.

Fekir may be the most eye-catching, but he’s certainly not the only impressive signing by a mid-ranking Spanish side this summer. Here are a few more smart moves at knock-down prices that may have flown under the radar this summer…

Raúl Albiol – Napoli to Villarreal (€4m)
He may be 33 years old, but the former Real Madrid defender will add some much needed quality and experience to Villarreal’s shaky back line. Only five teams conceded more than the Yellow Submarine last season, and their weakness at the back contributed massively to their season-long battle against relegation. Villarreal will be hopeful that Albiol can have the same kind of impact that fellow ageing Spain international Santi Cazorla had on his return to the club last season.

Alexander Isak – Borussia Dortmund to Real Sociedad (€6.5m)
At just 19 years old, Isak is one of the most highly rated youngsters in world football. Having made his mark in his native Sweden with 10 league goals for AIK, he signed for Borussia Dortmund soon after his 17th birthday. He struggled for first team chances in Germany, but 13 goals in 16 games on loan at Willem II last season convinced Real Sociedad of his quality. Isak now has the chance to get his career back on track away from the spotlight in San Sebastián, and the €6.5m La Real invested in him could prove to be an absolute bargain.

Joan Jordán – Eibar to Sevilla (€14m)
He may have a name like one of your Nan’s friends, but don’t let that put you off. Joan Jordán is a solid yet energetic midfielder whose performances have been vital to Eibar’s continuing over-performance in La Liga over the past couple of seasons. He was heavily linked with a move to Arsenal earlier in the transfer window, but Julen Lopetegui’s Sevilla managed to beat the Gunners to the punch. At 25 years of age, Jordán is entering his prime years, and he should be a good fit for a Sevilla squad that is undergoing reconstruction overseen by new boss Lopetegui and returning technical director Monchi.

Portu – Girona to Real Sociedad (€10m)
Portu, or Cristian Portugués Manzanera to give him his full name, was a star of the Girona side whose light shone brightly but all too briefly in La Liga over the last two seasons. A versatile player who can play across the forward line and on either flank, but is probably most comfortable in a central attacking midfield role, Portu registered 20 goals and seven assists in Girona’s fleeting visit to the top flight, and his industrious yet skilful style should make him a bargain for La Real at just €10m.

Santi Mina – Valencia to Celta (Part exchange)
By insisting that Mina be included in any deal to take Maxi Gómez to Valencia, Celta de Vigo found a solution that suited all parties perfectly. Mina was reportedly unsettled in Valencia, so a return to his hometown club seemed to be the best solution. An undoubtedly talented player, he had spells of brilliance in Valencia but these were often followed by periods of frustration. Like returning team-mate Denis Suárez, Mina will be hoping a homecoming will give his career the boost it gave to Iago Aspas, who struggled away from Vigo but has turned his career around since his return.