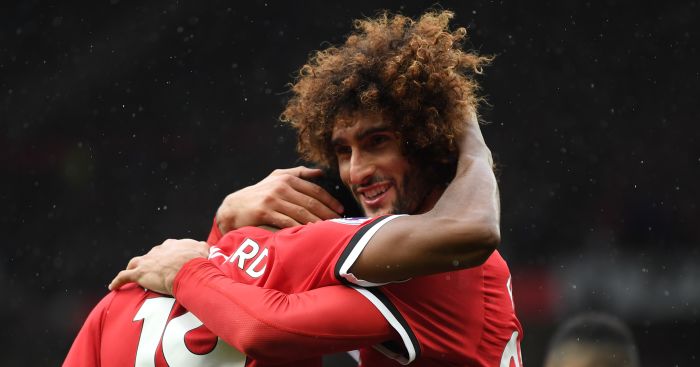 Marouane Fellaini was one of “two or three” Belgian players that probably just missed out on a nomination for the Ballon d’Or, according to Roberto Martinez.

It was hard to imagine last season that Fellaini would be able to dislodge Ander Herrera in the middle of Jose Mourinho’s midfield but that’s exactly what has happened this campaign.

Only an injury to the big Belgium international and Paul Pogba allowed the Spaniard back into the United midfield in recent weeks.

Kevin De Bruyne, Eden Hazard and Dries Mertens were the three Belgium internationals nominated but Martinez thinks Fellaini and Thibaut Courtois were unfortunate to miss out.

“And two or three players who maybe just about missed out on a nomination, like Thibaut Courtois and Marouane Fellaini,” Martinez told So Foot.

Fellaini picked up his knee injury while on international duty on October 9 and is expected to return for the Red Devils in the next week.

And Ryan Giggs thinks Fellaini’s success this season is down to doing what he is told and carrying out instructions.

Speaking last month, Giggs said: “Marouane Fellaini has really proved his importance, stepping in for Paul Pogba. He has scored important goals, as he did at Everton.

“I’ve worked with him and he’s a great lad to train because he does exactly what you want, and hasn’t let the fans bother him because he’s always had the support of the players and the coaches.

“He is effective, knows his strengths and limitations, and he’s somebody who Jose has put a lot of faith in and he has repaid that with some important goals.”