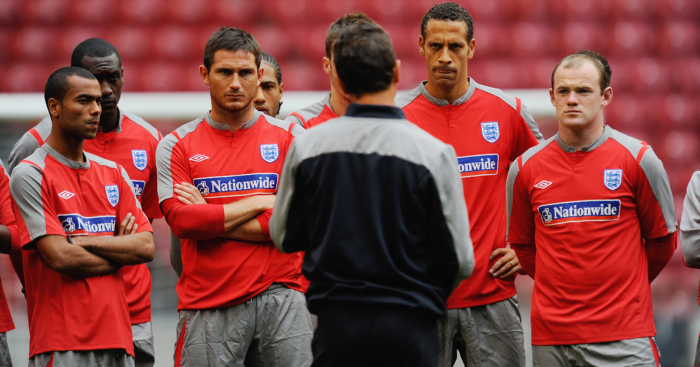 As Gareth Southgate prepares to name his squad on Wednesday for this summer’s World Cup finals in Russia, Ferdinand flatly dismissed previous managers – the likes of Steve McClaren, Sven-Goran Eriksson and Fabio Capello – as “not good enough”.

But the 39-year-old’s main focus was the players, and himself in particular, as he warned that the drive to win trophies with United prevented him from bonding with players from rival clubs while on international duty.

Ferdinand told the Times magazine: “It overshadowed things. It killed that England team, that generation.

“One year we would have been fighting Liverpool to win the league, another year it would be Chelsea. So I was never going to walk into the England dressing room and open up to Frank Lampard, Ashley Cole, John Terry or Joe Cole at Chelsea, or Steven Gerrard or Jamie Carragher at Liverpool.

“I wouldn’t open up because of the fear they would take something back to their club and use it against us, to make them better than us. I didn’t really want to engage with them.

“I didn’t realise that what I was doing was hurting England at the time. I was so engrossed, so obsessed with winning with Man United – nothing else mattered.”

While his reflections would appear to indicate regret, Ferdinand admitted he would still put club trophies first.

He continued: “If I had my time again, would I be different? I’d like to try to be different. But if it meant I wasn’t going to win my trophies, I don’t think I’d change.”