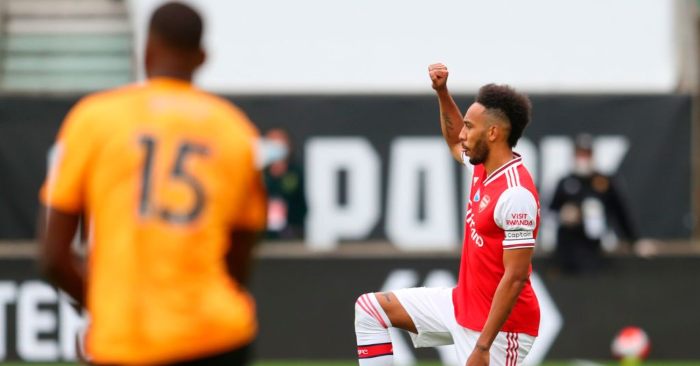 Les Ferdinand has defended QPR’s decision not to take the knee ahead of their match against Coventry, claiming the gesture’s “message has been lost” and is now akin to a “a fancy hashtag or a nice pin badge”.

Friday night’s televised Sky Bet Championship fixture was the first live game where players did not kneel before kick-off, a move which had been adopted as support for the Black Lives Matter campaign when football resumed.

QPR said in a statement on Monday the decision had been made jointly with Coventry and the match referee ahead of the game, and was not done “to suggest a lack of support for the Black Lives Matter movement”.

There were many other games across the divisions over the weekend where players did not make the gesture.

Director of Football Ferdinand said: “Taking the knee was very powerful, but we feel that impact has now been diluted.

“In the same way ‘Clap For Carers’ was very emotional for us all, it got to a stage where it had run its natural course and the decision was rightly made to stop it.

“Does that mean we, as a nation, don’t care or appreciate our NHS workers? Of course it doesn’t.

“No one is more passionate than me about this topic. I have spoken on the matter throughout my footballing life.

“I work for one of the most diverse football clubs in this country. A lot of people are being fooled out there.”

Former England forward Ferdinand also had spells at Newcastle, Tottenham, West Ham and Leicester before moving into coaching and then football administration with the Hoops.

Ferdinand maintains more must be done in the fight against racism and inequality than simply offer “a nice soundbite when something happens”.

He highlighted the lack of resolution to a complaint made by QPR following the abandonment of a friendly between the club’s under-18s team and Spanish side AD Nervion in August 2019.

“The taking of the knee has reached a point of ‘good PR’, but little more than that,” Ferdinand said.

“The message has been lost. It is now not dissimilar to a fancy hashtag or a nice pin badge.

“What are our plans with this? Will people be happy for players to take the knee for the next 10 years, but see no actual progress made?

“Taking the knee will not bring about change in the game – actions will.”

I agree with Lee Hoos and Les Ferdinand.
The symbols and gestures are important only if they create pressure to act.
We should be talking about solutions not symbols. Arguing about symbols is a distracting sideshow. https://t.co/X4mtSkWGYh

Kick It Out, football’s equality and inclusion organisation, issued a statement in support of Ferdinand and QPR in focusing on driving change.

“We know that racial injustice and other forms of discrimination did not end when the last football season ended,” Kick It Out chairman Sanjay Bhandari said.

“We encourage the players to continue to protest in whatever form they feel comfortable and to do so free of the risk of sanction, whether that protest is taking a knee, wearing a badge or any other form.

“I know that (chief executive) Lee Hoos and Les Ferdinand at QPR are deeply committed to equality.

“I know how rightfully enraged they were by the treatment of their youth team players last summer and the pitiful response of UEFA and the Spanish FA.

“I agree with them that we need to focus on action that creates real change. We should be talking about solutions, not symbols.”