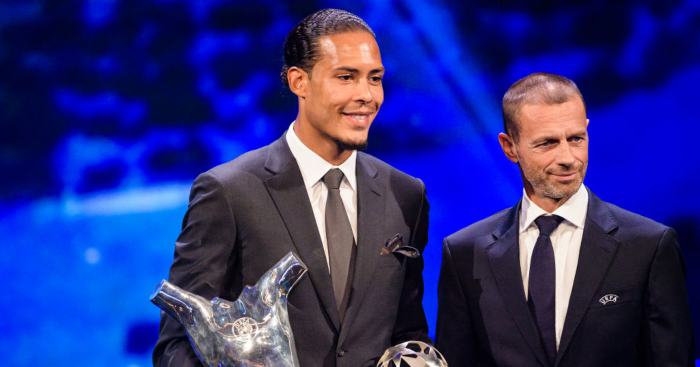 The 28-year-old Dutchman comfortably beat Lionel Messi and Cristiano Ronaldo, who have won this award five times between them, in a poll decided by coaches from the 32 teams that made last season’s Champions League group stage and 55 leading football journalists.

Signed from Southampton in January 2018 for £75million, Van Dijk was named the PFA and Premier League player of the year last season and was also man of the match when Liverpool beat Tottenham 2-0 in Madrid to claim their sixth European crown.

And now he can add two more gongs to his collection, as he was unsurprisingly named Europe’s best defender at the Monaco award ceremony which doubled as the Champions League draw.

“But listen, when a man scores 50 goals in a season like Messi did, or Cristiano winning trophies like he did and the effect he’s had in a new championship and at national level – you can’t look beyond that.

“People saying it’s a bit boring those two winning it every year, but they are putting up numbers we haven’t seen before for 12 to 15 years. You cvn’t look beyond that.

“I’m a centre-half and I’m delighted he’s won it but when you’ve got someone scoring 50 goals a season you can’t do that. They’re the best. Messi and Ronaldo have been penalised for the standards they’ve set it’s become boring for some people.”