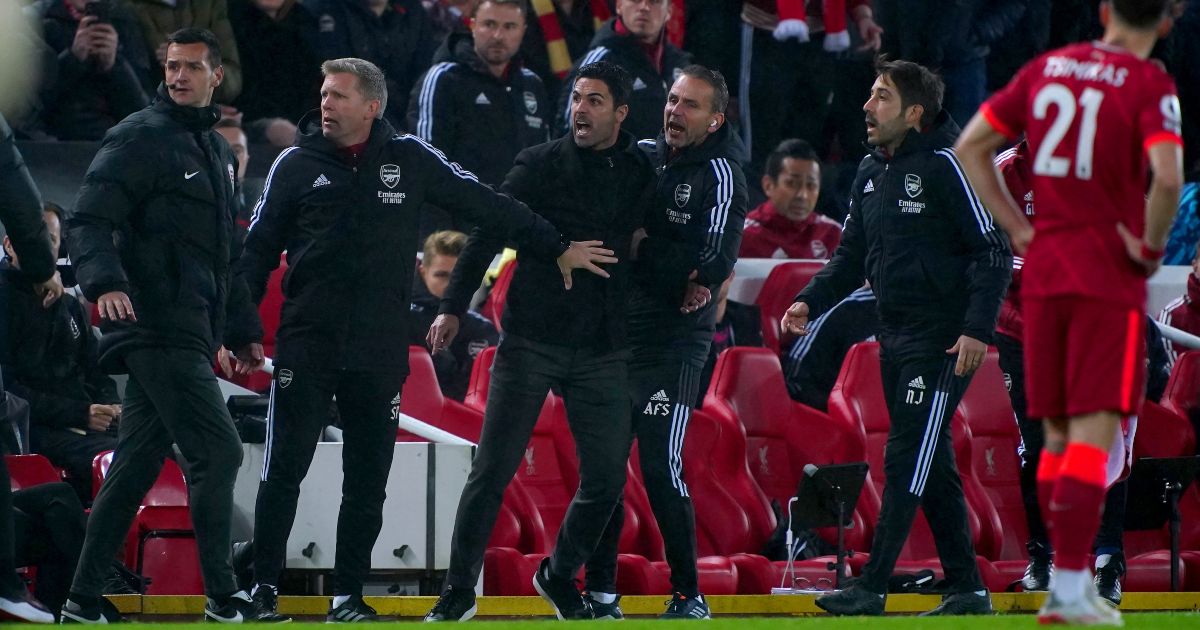 Rio Ferdinand thinks Arsenal boss Mikel Arteta showed his naivety by getting into a touchline dispute with Liverpool manager Jurgen Klopp on Saturday.

Arteta and Klopp were both shown yellow cards at 0-0 in the Gunners 4-0 loss to the Reds at Anfield after the Spaniard was unhappy with a challenge by Sadio Mane on Takehiro Tomiyasu.

The confrontation was heated and seemed to whip the crowd up inside the stadium as Liverpool went on to beat Arsenal comfortably thanks to goals from Mane, Diogo Jota, Mohamed Salah and Takumi Minamino.

And Ferdinand thinks it was “naive” from Arteta as the former Manchester United defender believes the Spaniard’s actions contributed towards Arsenal losing.

Ferdinand said on his Vibe with FIVE YouTube channel: “I watched the game and Liverpool just turned the screw. They turned the screw after Arteta and Klopp’s spat on the touchline, that Arteta started.

“That was naive, for me. At Anfield you don’t want to be gassing up that crowd and whipping them up.

“I think that was a little bit of naivety on Arteta’s behalf.

“I’ll give him the benefit of the doubt because he’s a young manager so I think he’ll learn from that.”

Gunners boss Arteta accepted his improving side were not in the same class as Liverpool at Anfield over the weekend.

However, he was annoyed with the mistakes which the home side punished so clinically, but did not feel his players cracked under the pressure.

“In the second half they (Liverpool) got some momentum and we threw it away in the first 15 to 20 minutes,” Arteta said after the match.

“We have given it away in very dangerous areas, not with pressure and with pressure, and we lost control of the game.”

On his team’s lack of experience the Spaniard added: “I don’t know, I’ve seen the biggest teams in the world come to this ground and collapse.

“They were better than us for 96 minutes and that’s the level. They’ve been together for six years and today you could see the difference from the moment we lost control of the game.”