Home All The News Ferdinand, Scholes in agreement over Fred VAR decision 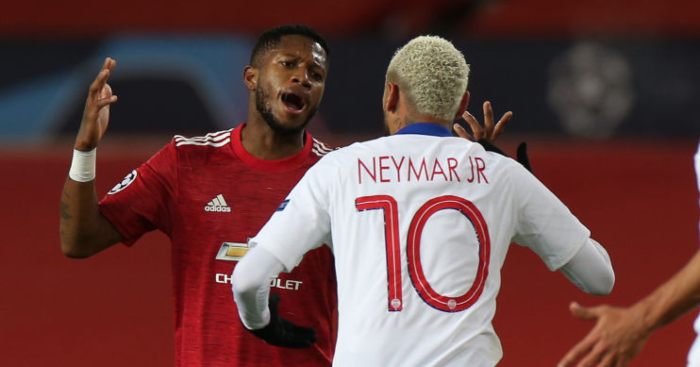 Rio Ferdinand and Paul Scholes both agreed that Fred was a “lucky boy” not to be sent off for a headbutt on Leandro Paredes in Manchester United’s 3-1 loss to Paris Saint-Germain on Wednesday night.

Fred looked set to receive a red card in the first half for pushing his head into that of Paredes, but referee Daniele Orsato only showed him a yellow card despite reviewing the replay.

The Brazil international was then fortunate to avoid picking up a second booking in a first-half challenge with Paredes but was eventually given his marching orders in the second period – albeit on this occasion he could count himself unlucky.

MAILBOX: Go now, Solskjaer. And take De Gea with you…

Speaking at half-time on BT Sport, Ferdinand said of the Paredes incident: “He’s a lucky boy, let’s be honest. There’s been a few occasions in the first half where he could have got at least a yellow card. There was a coming together of players.

“There was a bit of a discussion about things and obviously he moved his head and motioned towards the player. He makes a meal of it, yes, but in today’s game Fred is lucky to be on that pitch.”

Ferdinand added: “I’d have liked a little camera in the tunnel, it looked like it was going to go off in there.”

And Scholes agreed, he said: “He’s very lucky and he’s been involved in a couple of challenges. Ole might have to think about taking him off and bringing Van de Beek on because United have been in control of possession. It might be worth bringing another creative player on but Fred’s got to be very careful.

“I’ve enjoyed that about the game, there’s been a bit of needle about it and some technical play. It’s been really good to watch.”