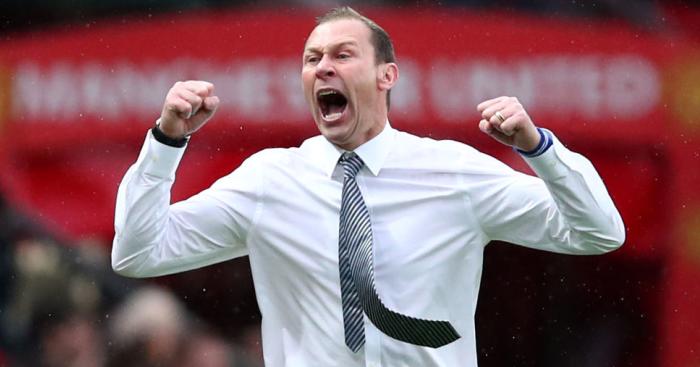 Duncan Ferguson refused to get downbeat over Everton conceding an equaliser against Manchester United.

The Toffees had taken the lead through a Victor Lindelof own goal, but Mason Greenwood found the net for the hosts late on to make it a draw.

However, interim Everton boss Ferguson said he had nothing to complain about with regards to the result.

“I am delighted at the moment,” he told Sky Sports. “We have got a point. Of course we were winning but I cannot complain.

“They came on strong in the second half but I thought we looked good on the counter attack. The boys were absolutely amazing.

“We beat a top team in Chelsea and now we’ve come to Old Trafford and got a draw.”

There was a peculiar moment late in the game, when Ferguson took substitute Moise Kean off – less than 20 minutes after introducing him to the action.

The striker was clearly not injured, and walked straight down the tunnel. However, Ferguson says his withdrawal was nothing personal.

“It was not because of his performance,” he explained. “I just needed to make a substitution to kill a bit of time.

“I have a lot of strikers on the bench, it was nothing against him personally.

“I thought he had not quite got into the pace of the game.

“Also, I have so many attackers on the bench I just needed to make a change to waste a bit of time. It is nothing to do with the player.

A positive first two games which saw a win over Chelsea and a draw at Man Utd means all is looking good under Ferguson, but he still says he has no indication over whether he will be offered the job permanently.

“I am sure the club are looking for the right candidate for the job.”