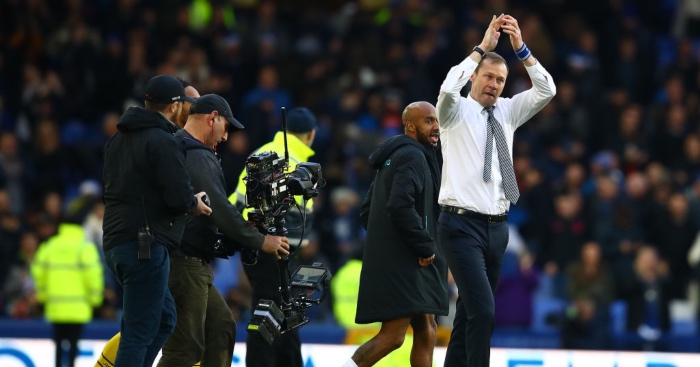 Everton interim boss Duncan Ferguson insists “me and the fans go way back” as he praised the players’ desire after the Toffees’ 0-0 draw at home to Arsenal.

Everton failed to register a shot on target in a very dull game at Goodison Park, but the result ensured Ferguson has gone unbeaten in his time in charge.

Ferguson said: “I think a point was fair. We struggled with energy levels and they probably had the better chances but we’re happy with a point. The players dug deep today.

“I’ve enjoyed it but I knew it was going to be tough today. The boys were on their last legs to be honest, after working so hard in the last three games. But we still covered every blade of grass – we just lacked a bit of quality in the final third.

“Me and the fans go way back – I’ve been here 25 years. They’re the lifeblood of the club.”

On Carlo Ancelotti, Ferguson said: “What he’s done in the game is incredible so I can’t wait to get started working with him. I’ll be here as long as the club want me here so I’ll be back on Monday.”