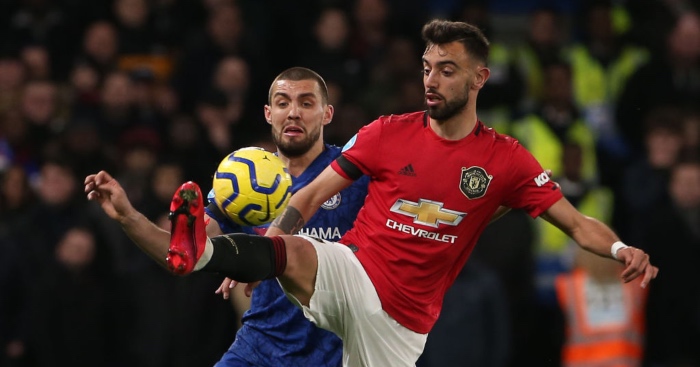 Bruno Fernandes insisted that Manchester United can “do much better with the ball” after they battled to a 2-0 win over Chelsea on Monday night.

Headers from Anthony Martial and Harry Maguire – who Frank Lampard insists should have seeen red – were enough for the Red Devils on the night, and Fernandes himself came close with a rasping free-kick that struck the post in an excellent individual performance.

But United finished with just 39% possession, and were rescued by VAR on a couple of occasions, as Chelsea twice had goals disallowed.

And Fernandes was not completely satisfied with the visitors’ performance, as he told Sky Sports post-match: “I’m really happy. It’s a difficult game against Chelsea.

“They are a great team and we needed to win to keep fourth [place in reach].

The January signing went on to express how happy he is to be lining up for the “biggest club in England” after spending the last three years of his career in the Primeira Liga with Sporting.

“I feel good, obviously. I’m playing for, I think, the biggest club in England and I’m really happy. It’s a dream come true,” he added.