Home All The News Pogba, Fernandes would ‘definitely’ be benched under Sir Alex at Man Utd 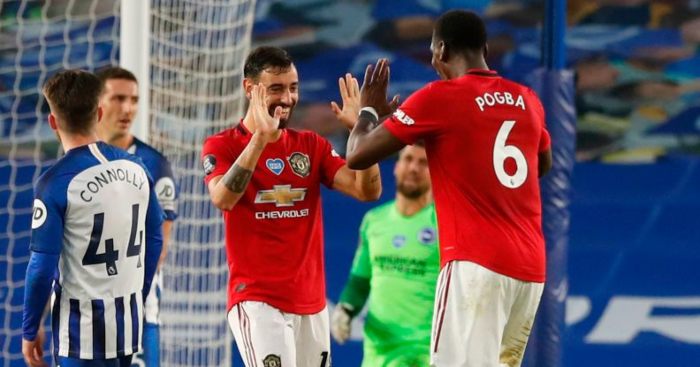 Eric Djemba-Djemba (that’s right) claims Paul Pogba and Bruno Fernandes would have been on the bench when he was at Manchester United.

The former Red Devil also believes Ole Gunnar Solskjaer has found the solution to be able to fit both Fernandes and Pogba into Manchester United’s midfield.

Nemanja Matic’s return to form has been a welcome bonus for Solskjaer, and has provided some much needed balance to his side.

The partnership between Pogba and Fernandes has blossomed post-lockdown and United are playing some brilliant football.

Solskjaer is expected to add to his squad in the summer, but Djemba-Djemba claims they don’t need a defensive midfielder as they will struggle to find a better option than Matic.

Djemba-Djemba told Betting Apps: “I would just play Matic behind Pogba and Fernandes.

“I think that Matic is the best defensive midfielder at United at the moment. I don’t think that United need to sign any other midfielder.”

“He still a young lad, and we can still expect better things to come from him.

“Dog days are very good player, and he needs those players around him.

“Now you will see, with Matic and Fernandes, Pogba will become a world-class player again.

“He needs them to push him, to tell him that he can do these things, to turn him into an even better player.”

On whether Pogba and Fernandes would both have been on the bench when he was at United, Djemba-Djemba insisted: “For sure!

“Fernandes and Pogba would definitely have been on the bench behind (Roy) Keane and (Paul) Scholes.

“Those two were amazing together. Roy Keane was like a coach, like a manager to the team.”