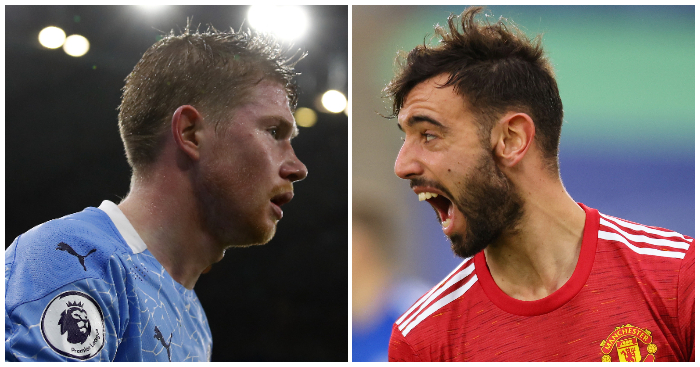 Bruno Fernandes and Kevin De Bruyne are obviously good and important players for the good and important football clubs Manchester United and Manchester City. But ahead of tonight’s crunch meeting in the Carabao Cup semi-final it’s time to settle once and for all which of them is the best and oh I see you’re not talking about any Liverpool players in this feature? How typical of your bias.

Anyway, on with the scientific and objective awarding of numbers to categories. Because this feature hangs around a League Cup semi-final, we’re obviously basing it on Premier League stats. And because Bruno Fernandes made his debut in February of last year (do you remember February of last year? Seems mad now, doesn’t it?) all the stats are from… January 1 last year. Okay? No? Good.

Goal contributions
A strong early round for the United man. Fernandes joined United at the end of the winter transfer window in 2020, making his debut in a goalless draw against Wolves on February 1. Despite giving everyone else a month’s head start, the Portugal international has the most direct goal contributions in the Premier League since the start of last year. Fernandes has been involved in 33 goals, two more than nearest rival Mohamed Salah of Liverpool – who won the title last season – with De Bruyne back in fifth place on 25.

Goals
Fernandes again has the edge over De Bruyne in terms of goals scored since his arrival in the Premier League. The 26-year-old has hit the back of the net 19 times in the league, with nine coming from the penalty spot. Only Salah (23) has scored more. De Bruyne, though, has scored just nine in total, with four of his strikes coming from penalties, in a disappointing round for the City talisman.

Assists
The ruddy-faced Belgian roars back into contention in his specialist subject. De Bruyne is the king of assists in the Premier League in the last year, but he only just pips his rival to that accolade. City’s playmaker has set up 16 goals for his team-mates – two more than Fernandes. The only other player in the Premier League to hit double figures for assists since January 1, 2020 is Tottenham’s Harry Kane. The 29-year-old De Bruyne has eight assists so far this season while Fernandes has seven. They are second and third in the rankings, respectively, behind Kane (11).

Win ratio
Last season, Ole Gunnar Solskjaer’s side had a 37.5% win rate without Fernandes in the team – which increased to 64.3% with him in the starting XI. United simply score more goals, concede fewer and collect more points with the Portuguese playmaker in the heart of midfield. However, the same can be said of De Bruyne’s impact. The Belgian has been left out of the starting line-up eight times in the Premier League over the past two seasons and City’s win rate plummeted in those games – down from 70% with him to 37.5% without. A narrow win for the Belgian here.

TOTAL: BRUNO FERNANDES 35-31 KEVIN DE BRUYNE
So there you have it. There’s a new main man in Manchester and he wears red. Now wonder he was our player of 2020. Over the last year (and a little bit) there is simply no doubt that Fernandes has been the superior Mancunian talisman. But who will come out on top tonight? Dunno.