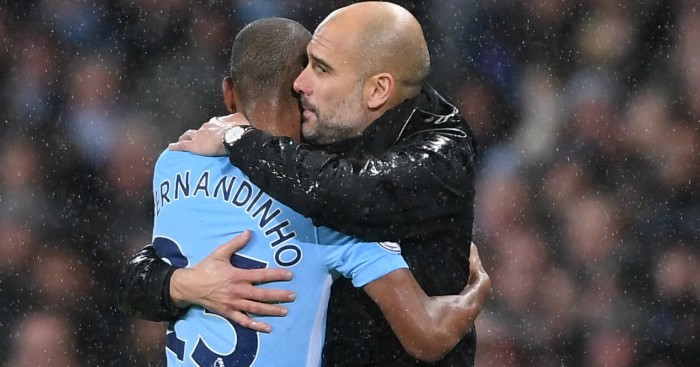 Fernandinho knows the title is now tantalisingly close for Manchester City – but will not ease up until it is secured.

Pep Guardiola’s men restored a 16-point lead at the top of the table with a comfortable 2-0 victory over Stoke on Monday.

They now need only a maximum of three more wins to complete the job, but just two will suffice if one of them comes against second-placed Manchester United.

With a derby coming up at the Etihad Stadium on April 7, City fans can anticipate potentially securing the title against their arch-rivals – providing Everton can be beaten first on March 31.

But midfielder Fernandinho does not want to look that far ahead yet, even though he is sure the celebrations will begin sooner or later.

The Brazilian said: “We cannot deny we are close to winning the league but we have to keep working and keep focused, as we did since the first day, (going) game by game, step by step.

“By working hard every day, every week, every game we are going to go get there.”

City were hardly tested by the relegation-threatened Potters and played within themselves despite dominating possession.

They did carve out numerous chances though and well-worked goals early in each half from David Silva proved enough.

“Of course it is a tough place to come and play good football but we did it,” said Fernandinho. “We are happy for that and one more step to the title.”