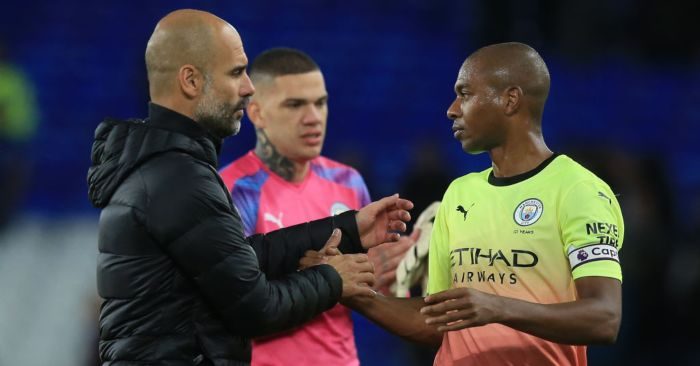 Fernandinho claims Manchester City’s poor record at Anfield will count for nothing this weekend.

The Premier League champions travel to current leaders Liverpool for an eagerly-awaited clash on Sunday.

Despite City’s recent domestic dominance, they have been unable to break a long-running Merseyside hoodoo.

Not even the arrival of Pep Guardiola as manager has brought a change of luck, with the Spaniard’s four trips to the ground including the chastening 3-0 Champions League quarter-final loss in 2018.

There is plenty riding on the latest meeting, with City looking to cut into the Reds’ six-point lead at the summit.

Fernandinho, who has been forced to reinvent himself as a defender this season due to injuries, said: “There’s always a first time in the life, no? We are searching for this first time to win at Anfield.

Fernandinho believes City can build on the spirit shown in their hard-fought draw against Atalanta in the Champions League in midweek.

City had travelled to Milan looking for the victory that would secure their place in the last 16 but they were forced to reassess on a night of goalkeeper chaos at the San Siro.

First-choice Ederson was forced off injured at half-time and his replacement Claudio Bravo was sent off for a foul outside the box. City ended up hanging on for a 1-1 draw with right-back Kyle Walker in goal.

Fernandinho said: “As I say to the lads, with a game like this, if you can’t win you don’t lose.

“One man down, both keepers went out for different situations. I think that’s the spirit of the lads, for sure.

“Now it is good because everybody is understanding what we are building.

“We had to defend a little bit more than usual but Sunday we go there to try to win the game from the first minute.”

City are still waiting on updates on Ederson, who suffered a thigh injury in the first half.

Along with playmaker David Silva, who missed the trip to Italy with a muscular problem, the Brazilian is doubtful for the weekend.