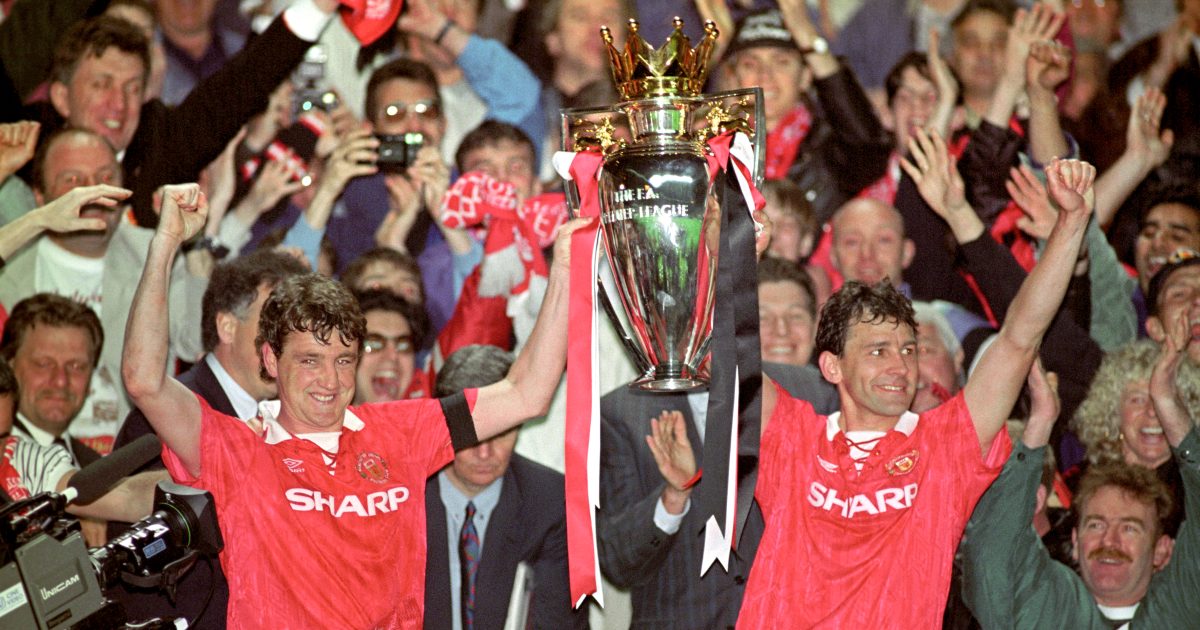 History is written by the victors, and this truism has been taken to its logical conclusion with the first episode of Fever Pitch: The Rise of the Premier League, the new documentary series about the first years of the Premier League. The series is being broadcast on BBC2, but this isn’t a BBC production. It’s made by David Beckham’s Studio 99; and it shows.

There are two obvious giveaways. Firstly, Beckham is in the first episode, even though it ends at the end of the 1992/93 season and Beckham was only in the Manchester United youth team at the time, having turned professional in January 1993. And secondly, it would have been more or less impossible to make it any more slanted towards Manchester United. But we’ll come back to that.

The first 20 minutes are dedicated to the circumstances that led to the formation of the League, and it’s not so much that they get things wrong as that the omissions misrepresent the past. Hooliganism is taken as a fact of life, ‘a slum sport played in slum stadiums and increasingly watched by slum people’, with nobody bothering to correct them on behalf of the many thousands of us who went to football matches prior to 1992 but don’t consider ourselves ‘slum people’. It’s worth remembering at this point that more than 150 people died at Bradford and Hillsborough combined.

But the origin story is never fully explored. That crowds had bottomed out in 1986 and had been slowly recovering since isn’t really touched upon, and neither is The Taylor Report, the post-Hillsborough document which recommended, among other things, the introduction of all-seater stadia. The widespread opposition to the League’s formation is blithely dismissed, with Football League President Bill Fox quietly mocked as a dinosaur. It’s not mentioned that Fox died in December 1991 aged just 63, either.

Otherwise, there is something pleasingly predictable about all the talking heads in the first third. David Dein of Arsenal is both oleaginous and patronising and Martin Edwards of Manchester United is impossibly posh, while the advertising spods who ‘commercialised’ the new league have no soul and the footballers interviewed are enthusiastic but hardly the deepest thinkers, with one extremely notable exception.

Other than this, along with a surprisingly detailed segment on the formation of Sky TV, what is notable is what is omitted from this foundation story. Greg Dyke, the ITV Head of Sport, first invited the Big Five clubs to consider the idea at the end of the 1990/91 season, but this isn’t mentioned, and neither is the story of how Rupert Murdoch had a man on the inside: the Tottenham Hotspur chairman Alan Sugar, whose Amstrad company made the satellite dishes that would be selling like hot cakes if exclusive live televised football went to Sky.

There’s no mention of Sugar’s infamous phone call to Sky’s CEO Sam Chisholm, telling him to “blow them out the water” with his bid, or that ITV were expected to win, and there’s no mention of the fact that the Big Five wanted to accept the lower ITV bid of £262m because it would have featured one of them practically every week, while Sky promised to be more egalitarian in its distribution of matches, which appealed more to the other clubs. There’s no mention of the abandonment of a commitment to reduce to 18 clubs, a key factor in getting the FA to ratify the new league.

Anybody without an understanding of all this could easily be persuaded that David Dein went round to Rupert Murdoch’s house and got him drunk, and that Murdoch just wrote Dein a cheque for £304m on the spot because he “likes a gamble”. They don’t even mention that the BBC were partnered with Sky to bring back regular league highlights to Match of the Day for the first time since 1988. For the previous four years, English football’s most celebrated football show had been limited to the FA Cup and the Charity Shield. It’s a strangely incomplete retelling of history.

The last two-thirds of the first episode are taken up with the story of its first season, but there’s another problem: the almost complete absence of anybody that isn’t Manchester United. Blackburn Rovers play an upstart supporting role until Alan Shearer twangs his knee ligaments halfway through the season, whereupon Rovers cease to exist, and most of the other teams who make any appearance are only shown because they’re getting beaten by Manchester United. Aston Villa (who pushed them until the last couple of weeks of the season) and Norwich City (who were still in the race with a month left to play) are not mentioned.

It’s not just United’s challengers who are missing, either. The other four members of the Big Five disappear in August 1992, which may be a case of art imitating life, but there’s also no mention of Leeds United’s terrible title defence (although there is a lengthy segment about them agreeing to sell Eric Cantona to Manchester United), or of Nottingham Forest’s relegation – 13 years after they’d been the champions of Europe – and Brian Clough’s retirement.

Fever Pitch is well-made. The archive footage is excellent, especially the shots of Sky Sports’ very early promotional material, which will likely bring out a Proustian rush in anybody in their late 30s or older. Also, although the episode does lean too heavily on Manchester United, it does go into admirable detail in places. The Dion Dublin injury, which prompted Martin Edwards to enquire about Cantona’s availability, is sensitively handled, while Cantona himself is always outstanding value for money. Similar detail is given to Sir Alex Ferguson’s difficult times with the club prior to the arrival of Cantona. It is a terrible pity, for more than one reason, that Ferguson doesn’t seem to have been available for this series.

These days, we’re used to bias. It’s everywhere. But the bias on display in Fever Pitch is unusual. It’s bias by omission. We don’t get anything like the full story of the formation of the Premier League. Without Greg Dyke or Alan Sugar, it can’t be. The almost complete focus on Manchester United is similarly strange. There’s little actual talk of the title race they were in, and the challenging teams are invisible.

If Fever Pitch was a documentary about Manchester United’s 1992/93 Premier League winning season, why bundle it up with the story of the league’s formation, and why have lengthy inserts on Blackburn Rovers? Is this solely to link up with their 1995 title win? If the BBC wanted to commission a series about Manchester United in the 1990s called Fever Pitch: The Rise of Manchester United, why not just do that and label it as such? It’s a fascinating story in its own right, and it could hardly be argued that there wouldn’t be an audience. But if the BBC think that they’re telling the story of the birth of the Premier League here, they’re sadly mistaken.