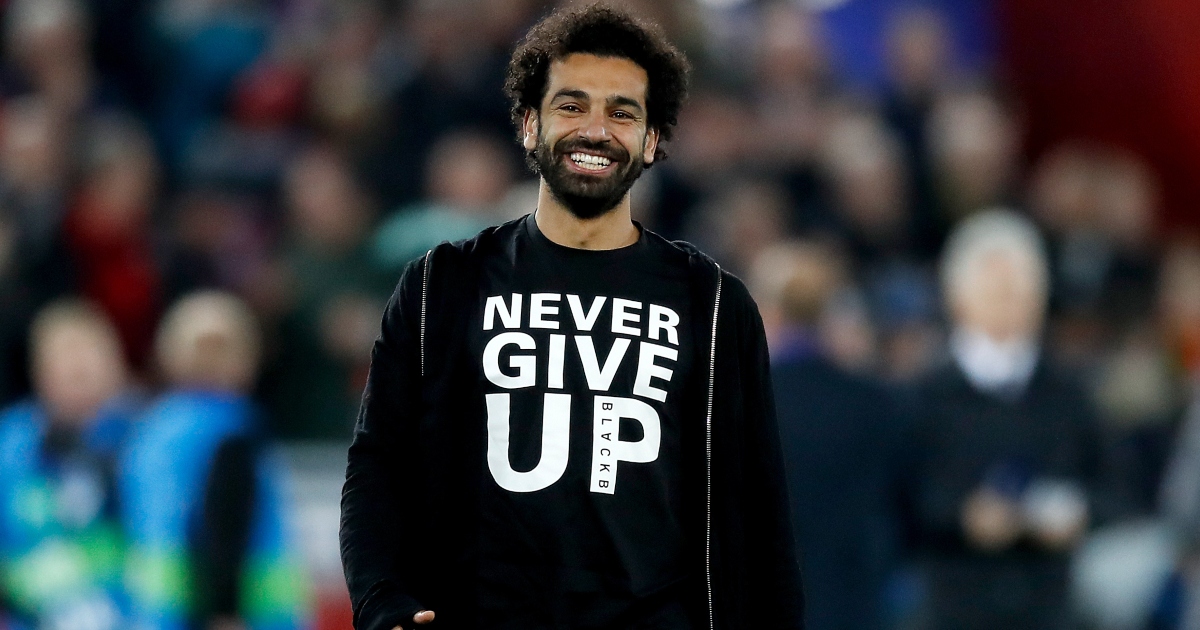 Johnny Nic goes all weak at the knees in his gushing tribute to one of Liverpool’s finest ever strikers, a Muslim icon and all-round good egg…

Who’s this then?
Mohamed Salah Hamed Mahrous Ghaly is a 29-year-old 5ft 9ins Egyptian striker who plays for Liverpool and has been capped by his country 71 times.

While currently being one of the world’s great goalscorers and scorers of great goals, he didn’t really hit his scoring stride until he got to Roma, six years into his career. His 19 games across two seasons at Chelsea had produced just two goals but once at Roma it was his 34 goals in 83 games that brought him to the attention of Liverpool. It must be the best £36.5million they’ve pretty much ever spent to bring him to the club.

Then 25 years old, he found the perfect club in Liverpool who centred their style of play around a structure that best suited his assets.

He exploded in his first season at Anfield, scoring 44 in 52 games that year. Ironically his worst year for goals so far was 23 in the title-winning season. He’s already scored nine this campaign. But it’s not just the goals, it’s the 45 assists so far, too. He functions as part of the most dynamic and thrilling front three in European football.

He plays almost every game and is absolutely indispensable to how the team functions, a role he also plays for his country.

He is incredibly generous, even at one point finding the man who had robbed his family and giving him money and helping him into work. That is above and beyond what most of us would think of doing. He helped fund building schools and hospitals. He gives monthly allowances to 450 families. Now that’s how to make your wealth work for the greater good.

As a strict Muslim, his generosity and general good-vibes bonhomie has even been credited with helping to reduce hate crimes in Liverpool.

Why the love?
There is no finer sight in modern football than Mo racing down on goal with the ball at his feet. He has a very distinctive way of running, more scuttling really. His chest out, hair pushed back as though by G-force, it appears as if his legs are carrying him faster than his body is willing to go.

Although not tall, he is incredibly strong, muscular and absolutely ripped. This makes him hard to knock off the ball and yet at the same time, he’s a magician with his feet, capable of chopping a ball back and changing direction in a heartbeat. There is a kind of perpetual motion about him in that he doesn’t stop moving, he’s constantly pushing and probing and angling.

As I’ve said before in the column, from the stands, the sight of a man running fast, when you see it at distance, the whole of the pitch before you, is simply exhilarating. It is an easy gift to appreciate in a way that some of football’s more subtle skills are not without the aid of a television replay. I’m pretty sure even opposition fans love to see him go. He’s impossible to hate, there is too much joy in his work.

But while the running always endears you to fans, add in the fact that it is such an effective route to scoring goals both for Mo himself and for his teammates, then you’ve got a legend on your hands.

Is he a striker? Is he a winger? Or is he a ‘stringer’ somehow combining both roles into an entirely new one all his own.

But it doesn’t stop there with Mo. He is such a decent, good-natured fella, we want him to do well. His big beaming smile and wild hair make him look like some sort of laughing guru in a 1960s psychedelic comedy caper featuring the Beatles and Roy Kinnear.

His role as deliverer of the good vibes is all the more important when you consider he’s a muslim and as such acts as great counterweight to the negativity that surrounds that faith in some quarters.

Any Liverpool game he plays in is worth watching simply to see what Mo will do. He is an entertainment all on his own

Three great moments
A goal that is more dancing than football

His first goal in the Premier League. Looks familiar.

Sit back and enjoy. Some absolute stunners here

What the people say
As one of the most likeable characters in the game today, words of praise were fulsome for Mo. It’s interesting how we respond positively to people we think are ‘good’ in football, isn’t it? It’s like we’re thirsty to find something to pin our hope on.

– How much is a player’s career determined by being at the right club at the right time and having the right manager? Or would he always have ended up world class?

– He’s a brilliant footballer but comes across as likeable. That’s refreshing compared to Ronaldo or Neymar

He’s everything. A wonderful player. An icon to both his club, country and religion. A devoted family man. An absolute hunk. Lovren’s best mate. A winner. A good man. I still cannot believe he’s ours. Up with John Barnes as the greatest Liverpool player of my lifetime.

– He plays with a smile!

– Salah is a ruthless magician who never stops delivering and who has put himself firmly in the conversation for Liverpool’s greatest player ever. The way he can powerfully slalom in the box around defenders is truly a sight to behold. He is ‘watching greatness’ personified.

I never thought I would see any Liverpool player come anywhere near Ian Rush’s record of 47 goals in one season in all competitions (1983-84), but Salah scored 44 goals in 2017-18. That’s how good he is. Arguably the biggest ever sporting figure to emerge from a Muslim country

– I only include my feelings about Liverpool to show how much I respect Salah on spite of that. I do think he’d be more up there in discussions about the greats if he was from a top European or South American nation.

– Someone who more than any other player gives the impression that this is all effortless but is remarkably tough in body and mind. Gets booted off the ball more than most appreciate but only missed two games through injury and one of those was concussion. An absolute machine.

– Made the “knees collapse, arms in the air”move into an art form.

– What’s so good? Everything. Seriously. Literally everything.

Future days
His contract expires in 2023 and there is some concern that a demand for more money – which in Mo’s case will likely be spent on anyone except himself – will break the club’s wage structure.

But with the player himself seemingly very fit and all but indestructible, there must be a good chance he can keep up his form of the last few years for another three or four.

World-class strikers who score a lot of game changing goals and not just the luxury padding of the fourth and fifth in a 5-0 win. are hardly large in number. He is irreplaceable and that suggests that he won’t be replaced and that a deal will likely be done. It wouldn’t make a lot of sense to do anything else.

Having seen many Liverpool superstars over the decades, they live on in the local football lore for 40, 50, 60 years, as the death of Roger Hunt just proved. Salah is one of those who will be talked about for many years long long after he’s retired. Kids will ask their grandparents in 50 years time “did you see Salah play?” and they will nod sagely and say “he was very special”

The vision of him scuttling at speed towards goal will live on in the collective memory, the joy he has brought likewise indelibly printed on our collective synapses,