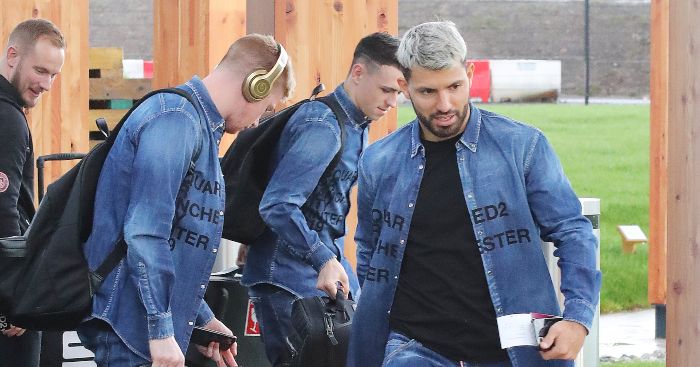 It looks like Man City are in hot water with FFP regulations again. But instead of issues with Financial Fair Play, this is a problem arising from the double-denim ensemble they wore on their way to Madrid. It can only go down as a Fashion Faux Pas.

Man City players donned the Texan Tuxedos as part of a partnership with fashion brand Dsquared2, but the sight of Sergio Aguero and co. forced into these ridiculous outfits should result in sanctions far harsher than a Champions League ban.

Might there be some other clubs in need of a wardrobe refresh? Here’s a list of those who can get away with breaking the real FFP rules, without risking a visit from the fashion police.

Fashion Faux Pas: Being overdressed
Club: Newcastle United
Florian Thauvin made headlines when he took the piss and travelled to a game in a tux, but if Steve Bruce’s men took to the field in Saville Row’s finest you can’t help but think it might add a touch of class to the turgid proceedings at St James’. Can you imagine how dapper Joelinton would look up front on his own in cufflinks? The fans might even forgive the lack of goals if he looked like James Bond. Someone would have to get a tailor to crop the trousers for little Miguel Almiron, mind.

Fashion Faux Pas: Novelty T Shirts
Club: West Ham
Look there’s no way of sugar-coating this one, but the club has already become a bit of a laughing stock, so why not lean into it? Mark Noble charging around midfield, ‘I captained West Ham, and all I got was this lousy T-shirt’ proudly etched across his chest. The affable Pablo Zabaleta wearing a number that, problematically, outs him as a Female Body Inspector. David Moyes with something truly ridiculous on his shirt; something like ‘Born Winner’, perhaps? Genuinely think this might put some overdue smiles on the faces of the long-suffering fans. Plus, if one of the players wears a shirt that dares to criticise the owners, they might be spared the indignity of having to attend the games.

Fashion Faux Pas: Clothes that don’t fit
Club: Manchester United
Fashion 101: Buy clothes that fit. Wearing clothes so small they cut off your circulation is a sure-fire way to look ridiculous, and baggy clothes are just as bad. In fact, they’re almost as bad as languishing in fifth place (which would secure a somewhat surprising Champions League place), having the makings of a good young squad, and still being in with a shot of winning the Europa League. So, for all the talk of crisis, Man United are doing alright. Despite this, fans and pundits are adamant in deeming large sections of the squad unworthy of wearing the famous shirt. Paul Pogba especially seems to find wearing the Red Devils kit uncomfortable. Maybe he should swap it for a better fit?

Fashion Faux Pas: Wearing the same clothes multiple days in a row
Club: Wolves
As a reward for exceeding expectations last year, Wolves have had a tough old season. It began in earnest all the way back on July 25, and they’ve played a ridiculous number of games, presumably racking up the air miles, since. People thought the Thursday-Sunday combination might prove too much for Nuno’s boys but, after a slow start to the season, they’ve continued their swashbuckling style, giving an excellent account of themselves on multiple fronts. But given how they seem to be playing constantly, is it really worth washing the kit only for it to be trotted out three days later? Think of Molineux’s laundry bills!

Fashion Faux Pas: Socks and Sandals
Club: Liverpool
Look, we all know they’ve won the league. We’ve known this since about September. It has driven Man City to double denim by February. They can’t break every record but Jurgen’s juggernaut continues to surge along, and with a Champions League trophy in the cabinet from last year, the World Club Championship conquered, and now the title wrapped up before March, no-one could really begrudge Liverpool’s squad’s minds from drifting towards the beach. Picture it now: Hawaiian shirts, buckets and spades, and some open sandals to feel the Mersey between their toes. Still, league regulations demand the players wear socks and shin pads (even if you’re Jack Grealish), so it’ll have to be full-blown-Dad on the footwear front. To be honest, even if they were playing in crocs, Mo Salah, Roberto Firmino and Sadio Mane would still be terrorising defences.