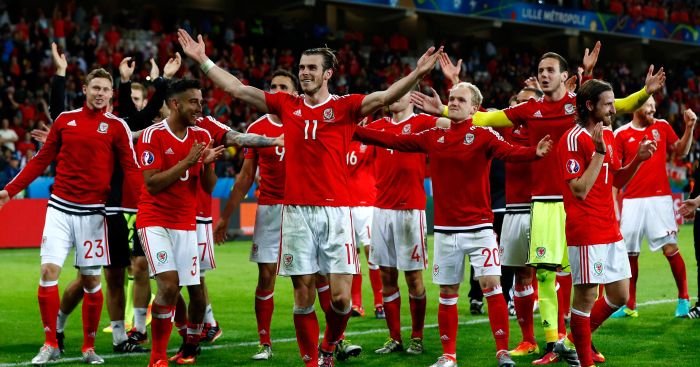 Wales’ run to the semi-finals of Euro 2016 saw them climb to 11th in the latest FIFA World Rankings, above England who drop down to 13th following an early exit at the hands of outsiders Iceland.

Chris Coleman’s men recovered from losing to England in Lens as they went on to win Group B before beating Northern Ireland, Belgium – currently the second best team in the world behind Argentina – and then losing 2-0 against Portugal, the eventual champions.

Wales move up 15 places to 11th, an increase of some 291 ranking points, the highest of any nation.

England, meanwhile, are down two spots, now also below Uruguay, after only winning one game at Euro 2016 and are currently looking for a new manager to replace Roy Hodgson.

Elsewhere, Northern Ireland are in 28th spot, down three places despite a memorable first European Championship campaign where they qualified for the last 16.

The Republic of Ireland are up two places in 31st, having beaten Italy to secure a place in the last 16, where they were defeated by hosts France despite taking an early lead through a penalty from Robbie Brady.

Scotland, who failed to qualify for Euro 2016, are in 50th place, down seven, as they prepare for a 2018 World Cup qualifying campaign which sees them in the same group as England.

Portugal, who beat hosts France in the final, move up two places to sixth. Les Bleus climb 10 places to seventh, now above Spain, after returning to competitive internationals.

Brazil are down two in ninth place, while Italy complete the top 10, having moved from 12th.

Euro 2016 surprise package Iceland climb 12 places into 22nd spot – above the Netherlands, who have plummet to 26th after failing to qualify for the finals.

Despite losing the Copa America Centenario final to Chile, Argentina remain top of the rankings with the leading five spots unchanged.

New Zealand were the month’s biggest climbers, moving up 54 places to 93rd after the All Whites’ triumph at the OFC Nations Cup.