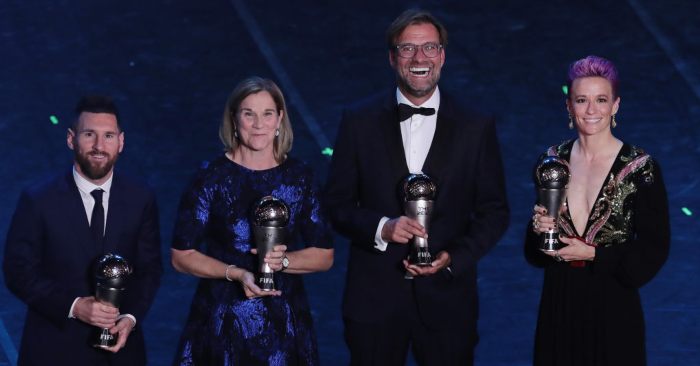 FIFA insists the voting process for The Best awards was entirely above board after claims it was fixed in favour of Barcelona star Lionel Messi.

The Argentinian won the vote at the ceremony in Milan on Monday night ahead of Juventus superstar Cristiano Ronaldo and Liverpool defender Virgil Van Dijk.

Delegates and players connected to various federations claimed their votes were either not counted or had been changed.

The world governing body said on Thursday that Egypt’s ballots were discounted as they were written “in capital letters and thus seemed not valid (not authentic)”.

A statement from football’s world governing body released on Friday afternoon read: “FIFA has been disappointed to see a number of reports in the media questioning the integrity of the voting process for the awards.

“These reports are unfair and misleading. The voting procedure for each of the awards is supervised and monitored by an independent observer, in this case PricewaterhouseCoopers (PwC) Switzerland.”

The statement added that member associations had been asked to submit forms both electronically and as hard copies.

“The written documents must also be signed by the responsible persons of the association as well as by the persons authorised to vote,” the statement continued.

“Therefore in order for a vote to be valid it must include the respective signatures and the member association’s stamp.

“Both FIFA and the independent observer can demonstrate that all the votes submitted in accordance with the rules and within the deadlines were taken into account. Consequently, there is no doubt whatsoever as to the authenticity of the result.

“Should there have been any case of wrongdoing, and even if this did not affect the result of the vote, FIFA will investigate and apply sanctions where necessary.”

The award was the sixth of Messi’s career and followed a 2018-19 season where he scored 51 goals and helped Barca to the Spanish league title.

Jurgen Klopp won the coach of the year award after steering Liverpool to Champions League glory, while United States star Megan Rapinoe won the women’s player of the year award for her key role in their World Cup success over the summer.