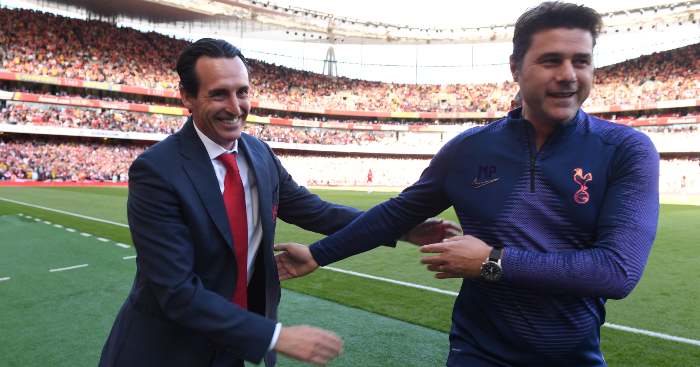 Spurs are a shambles and north London will be red – Will Ford
While Mauricio Pochettino may now be wishing he had packed his bags in the summer – his burgeoning reputation fully intact – after sensing he was at the tip of a peak about to descend into a trough, Unai Emery now looks to finally be moving from under the dark shadow Arsene Wenger left in his wake at Arsenal. Slow improvement at the Emirates is being mirrored by the decline across the city.

Their showings in Europe this week, while against sides of vastly differing quality, are a sign of the turning tide in north London. Chants of “are you Tottenham in disguise” rang out across the Emirates as Arsenal fans watched their side swarm over Standard Liege in a 4-0 win, with Spurs’ 7-2 drubbing at the hands of Bayern Munich never far from their thoughts.

Flying full-backs, exuberant youngsters, and summer signings paying off – a team playing with broad smiles on their faces. The performances of Gabriel Martinelli, Joe Willock and Kieran Tierney had Arsenal fans licking their lips at the prospect of a team on the up. Spurs fans, meanwhile, will be wondering how long the likes of Toby Alderweireld, Christian Eriksen and Jan Vertonghen will cling to a sinking ship, and whether they should throw them a lifebuoy or let them plummet into the abyss.

In no other area of the pitch are the differing prospects of the teams more apparent than in the full-back positions. Tierney and Hector Bellerin were supreme for Arsenal against Liege on Thursday. Whether dribbling past defenders or getting on the end of the other’s pin-point crosses, like Andy Robertson and Trent Alexander-Arnold at Liverpool, they could well be the driving creative force behind their team this season. Something that can’t be said of the Spurs equivalents.

It might be nice to live in Serge Aurier’s world for a while. It’s sometimes refreshing to not be bothered by annoyances like common sense, concentration or situational awareness. Sometimes it’s nice to just…be. Already sent off once this season against Southampton, his performances don’t merit the risk of including him as he consistently fails to toe the line between aggression and frenzy.

Kieran Trippier’s doing pretty well in Spain by the way…

i’m no expert but i don’t think that Aurier’s attempt to avoid stamping on Alaba has succeeded… pic.twitter.com/gb2JqffUfN

Danny Rose strikes me as a man who wishes he had pushed harder to force his way from the club he wanted to leave while he still had one big move left in him. Despite being just 29-years-old, links with Watford in the summer suggest he’s not the great commodity he was a couple of seasons ago.

Vertonghen is “ashamed”, Moussa Sissoko is querying the tactics and Pochettino is questioning their manliness; the team that banded together to make the Champions League final against all odds just four months ago is now one divided by transfer speculation and a sense of foreboding that the lack of silverware is now a very real problem for many of their star players.

The Spurs whitewash is flaking from the walls. As Serge Gnabry said: “North London is red!”.

This is as bad as it gets for Spurs; they’ll pick up – Ian Watson
Admittedly, this is a tough sell right now. This week we’ve seen Bayern Munich shine a light on all Tottenham’s greatest insecurities and mercilessly hone in on them one by one.

For most managers and many clubs, that would be it. Pochettino would have been mutually consented, thanked for his service and wished all the best for his future within 48 hours. But Daniel Levy, though he may be many things, isn’t stupid.

Pochettino is a damn fine manager, one of the very best in the game. If Spurs were to sack him, the Argentine would walk into one of the very top jobs – although not quite as convincingly as before. Pochettino needs to snap out of his sulk and address the root causes for his darkened mood.

There is no question that there is something wrong at Spurs right now. Pochettino and his players, who were tighter than their chairman at the start of the summer, appear to have turned on each other somewhat amid “different agendas”. Everyone has had their say, but now there are only two solutions: Sack Pochettino, which they won’t, or back him to turn things around, which he has shown he can.

Pochettino is a tempestuous character – it is part of his charm. It’s one of the things that makes him so popular and able to motivate when things are going well, so when they are not, we have to accept that side of his personality. Now he has got his strop out of his system – you would hope – you can bet he will be relying less on instinct and using his nous to come up with tangible solutions to Spurs’ problems.

Many of them centre around his midfield. It has lacked balance all season, with Harry Winks doing OK through the middle, but Tanguy Ndombele has sometimes looked a little wasted to Winks’ side. The record signing, like most imports, deserves time to settle and all the signs suggest he will. Ndombele will get better as the season progresses.

👏The quality of this guy on the ball is ridiculous, the through balls to Sonny were absolutely amazing! pic.twitter.com/HZ6bZId03H

Then there are the other new signings yet to come in. Giovani Lo Celso will need to fill Christian Eriksen’s boots should the Dane depart in January and we are yet to see Ryan Sessegnon. But the responsibility falls on the players Pochettino has worked with for a number of seasons now to help him dig them all out this hole.

It is hard to imagine that this week was not the lowest point. With Pochettino staying put, the recovery can begin.

Just maybe that might not be enough for a top-four finish, but it should be sufficient to claw back and hold off Arsenal, who have got plenty of their own problems and arguably a softer underbelly. Spurs generally start slowly then kick into gear. Not this slowly, granted, but they are used to improving as the season wears on. They have very winnable games coming up against Brighton and Watford and two victories will lift the gloom before they go to Anfield. As daunting as that may be, let us not forget that Spurs are the only side to take points off Manchester City at the Etihad in 2019.

But this argument boils down to Tottenham v Arsenal. Spurs are only two points behind the Gunners, they have a better manager, a stronger squad and injuries will subside. Only three days ago, some Arsenal fans were calling for Emery’s head. Once everyone at White Hart Lane has given themselves a shake after a chastening week, north London will be theirs again.